The Same, But Different 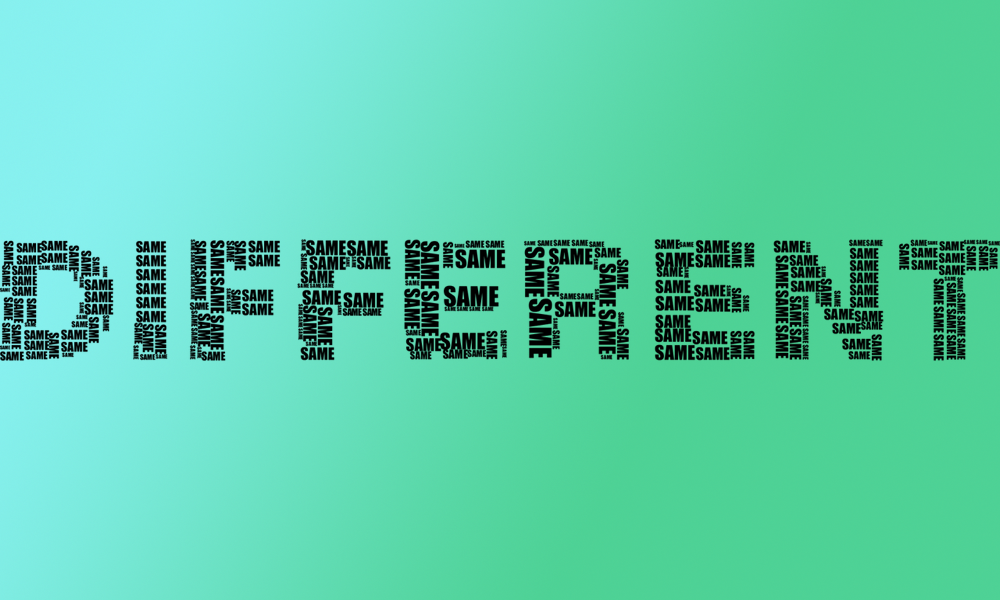 As most of you fine folks out there in Gnome Stew lands know, I’m a fiction author in addition to being an avid role player and part of Gnome Stew. In the realm of getting fiction sold before you can actually sell it to readers, there are agents and editors to work with to get a book ready for publication. I’m not going to do a deep dive into their roles and how they work because entire books can be (and have been) written on these topics. That’s not the point of Gnome Stew or this article.

Â Agents and Editors are looking for “the same, but different” in fiction.Â

At a high level, an agent (which is optional, depending on the publication process you’re going through) represents you and your works to acquiring editors at publication houses. At the various publication houses, there can be a single editor (for the really small houses) to many layers of editors (for the really large houses). I’m going to focus in on the acquisition editors for the moment. One of the things that authors despise hearing is that an editor is looking for “the same, but different.” This means that agents are typically looking for “the same, but different” as well.

What this sound bite really means, is that the editors and agents are wanting something that evokes feels that they’ve had with past reads, but by way of a new roads, new characters, new approaches, and fresh perspectives. This is an incredibly hard target to hit because it’s outrageously intangible. An author has no idea what the specific feels of an agent/editor might be wanting in a story. The author basically has to create some emotional resonance with their story and hope that it echoes with the agents/editors of the world.

You, as a game master, have the same task ahead of you when creating a fresh storyline to share with your players. Experienced players want “the same, but different” when they sit down at the table with you. Fresh players to the RPG hobby also want “the same, but different.” Both categories of gamers are most likely reaching back into their past literary, movie, and TV consumption for finding that “same” thing. The experienced folks at your table will also be wanting something that echoes adventures of days gone by.

The Tricks and Tips

Leverage what exists within the zeitgeist of popular media for your table. The popular media you need to lean on should be recent enough that it’s possible to recall the feelings of witnessing the events, but not so new that the likelihood of your group having seen it is close to nil. Don’t go too far back (depending on the age of the folks you expect to have at the table) because you may get outside the experiences of the current crowd of gamers.

As an example, pick a few scenes from the Death Star Princess Rescue line of events from Star Wars: A New Hope.

If you can cherry pick a few of those scenes, file off the serial numbers, and run with it, you’ll be pretty close to producing “the same, but different.”

Leverage what exists within the zeitgeist of popular media for your table.

Another way of going about this is to track down “classic” adventures from previous editions (or ages or eras) of the game you’re currently playing, and give them a more modern treatment and refreshed “window dressing” elements. This will be quite a bit of work. Stat blocks will require being updated/replaced/created. The story beats and elements brought to the table will have to be given a good, hard look to cleanse them of any socially negative items that tended to be common in the adventures of past decades. Lastly, if you change up location and key NPC names, and shift locations around a bit, you’ll have filed off the serial numbers and brought the game into the modern era. Even with all of these necessary changes, the similar notes will be hit.

Anyone that adventured through those slim campaigns of the days of yore when they were originally published will see the hints and remnants of what you have there. Hopefully, this will bring back a satisfying sense of nostalgia for the older players that will give them happy feels. This is also a chance to introduce great adventure concepts (without all the troubling racism, sexism, and bigotry) to the newer players and show them how much fun things from “back then” can be.

If you have a regular home group you play with, then you have an advantage here (roll both those d20s on this skill check and take the highest roll). This is because you know these people. You know their tastes. You know their inclinations. Most importantly, you know (to some extent) the history of gaming they have under their belts. You can leverage this intimate knowledge into offshoots and junctures of storytelling to allow you to hit those high emotional points that the players will remember forever.

Â Roll with advantage when in a home group.Â

A great approach here is to take a campaign you’ve already played in a different genre (e.g.: fantasy) and transpose the events, storytelling beats, and emotional hits into the genre of the current campaign (e.g.: cyberpunk). This will create echoes of the old story in your current story, but with completely different wrappings and interfaces. This will accomplish “the same, but different.”

Games at cons are going to be much, much more difficult (roll both those d20s on this skill check and take the lowest roll). Where you know the people involved in your home game, the games you run at cons are (usually) for complete and utter strangers. This is where you have to fall back on tropes, general concepts of storytelling, and leveraging common media influences to get close to the emotions of your players.

Roll with disadvantage when at a conference game.

Also, games at cons tend to be one-shots and very short adventures. It’s super difficult to try and hit some emotional resonance in a 4 hour slot unless the game you’re running is specifically designed to evoke feels. You can do this, but it does take some forethought and planning on the types of encounters you want to include in your game. This goes way beyond stat blocks and monster powers. Your line of thought here should be putting the PCs in situations that will feel familiar to most gamers, but with your own twist on the approach.

What story elements or stories in whole cloth would you like to see brought to the table in “the same, but different” manner?