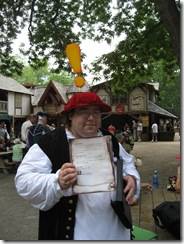 Just about every game has a variant on the quest-giver, whether it’s the infamous Mr. Johnson, the team’s commanding officer, a local political leader, or even the mysterious figure hanging out with all the loner rangers in the darkest corner of the tavern. Whether he’s just what he appears to be, or the tip of a conspiratorial iceberg, the quest-giver can be a handy figure to have around.

Quest-givers can define a mission, including such details as scope, expected opposition, victory conditions, and reward for success, all without breaking verisimilitude. They can also drop hints and rumors (or solid intelligence), and even offer advice for those who may need it. And like any NPC, the quest-giver can lead the party down the convoluted path of intrigue.

Assuming you’re the kind of GM who could use such a friendly fellow (or lass), here are a few tips:

Like many icons of the hobby, quest-givers are not necessary to a good game. A self-motivated group of players may take offense at the presumption that they can’t find their way into trouble. And many of the newer games neither need nor want something commonly associated with computer RPGs.

But just because it’s not for everyone, don’t be afraid to embrace the iconic quest-giver. He’s a handy guy to have around.

Do you have a different take on the quest-giver? Or perhaps some other skill to add to the repertoire? Sound off and share the wealth…