The Power of ClichÃ©: Why Being Original Isn’t as Important as Being Interesting 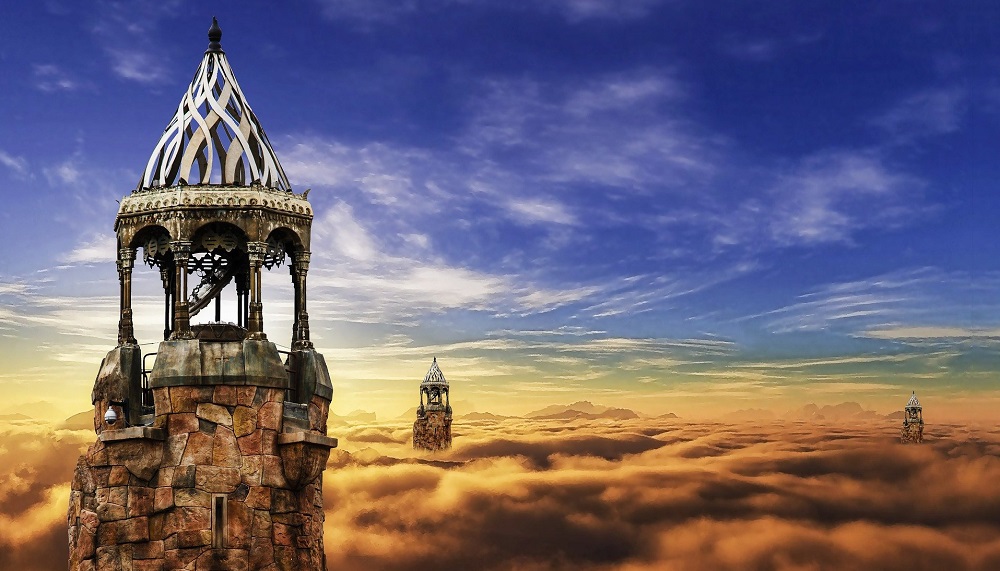 If you’ve written more than a sentence about this castle, it’s probably too much.

I’m currently running not one, but two experimental campaigns on weekends in Roll20; the experimental question is “how little worldbuilding can I get away with?” And the answer, it turns out, is very little.

I started with this map from DeviantArt, made four gods, one quest-giver NPC, an evil empire, and set the players loose – adding a few details based on backstories that the characters thought were exciting. Surprisingly, it turns out that was more than enough to create a satisfying campaign for ten total players. It was like the spaghetti of RPG worldbuilding: there’s enough for everyone to feel full, and I didn’t have to do too much cooking. And like spaghetti, even when the results are under-seasoned, poorly-prepared (and often a little too salty), either my guests are too polite to complain, or they bring enough of their own side dishes to both make the whole meal fun and to stretch this analogy well beyond the boundaries of usefulness.

Just…take a look at that map (and everything else the artist has on their page–they’re super talented). Absolutely nothing requires explanation (or remembering that explanation) because it’s all right there. Looking at the map, my players have elected, with no exposition dumps, to visit the Stones of Prophecy, Rajashi, and Elvenhome, because the things they will find there speak for themselves. Even the most outrageous elements (like “the exotic city”–oof that’s a whole other article) can be explained as diegetic elements of the characters’ understanding of the world, while also allowing you to show off fancy words like “diegetic.”

There are a lot of reasons why relying on clichÃ© can help do the heavy lifting for you, while making the game less burdensome for the players as well.

You are Not a Novelist (Here, at Least).

Maybe the most common problem I see new GMs run into is the desire to make a fully-fleshed out world with memorable characters, scenes and locations that players can interact with in detailed, pre-determined ways.

Players don’t do that. They try to punch your quest-giver, marry your Big Bad Villain, and demand the full life story of the nameless goblin urchin selling them apples in the small town named “Lucksburg” because you couldn’t think of anything better.

And you know what? That’s the game. That’s being a GM. You get maybe a sentence of heavy-handed narration before your players’ eyes glaze over. Scenes don’t happen in order (or at all), and that critical twist you spent hours setting up and preparing was built on a house of cards.

You get maybe a sentence of heavy-handed narration before your players’ eyes glaze over. Scenes don’t happen in order (or at all), and that critical twist you spent hours setting up and preparing was built on a house of cards.
You only have so much time, and unlike in creative writing, broad strokes are more useful than detailed descriptions. Tell, don’t show. “This village looks like the Shire from the Hobbit” is more than enough to tell the whole story without getting in the way of the action.

Your Players Want to Leave Their Own Stamp on the World

Another way that being a GM is different from being a novelist is that the characters themselves have agency–they want to press against the world you’ve built and see it change because of what they’ve done. This is really hard to do if you’re already invested in the world you’ve put hours of effort into, especially if the characters swing big. The more effort you put into your world being complete, the less space there is for your characters to complete it.

Well-worn clichÃ©s, like well-worn t-shirts, are full of holes and history. Places where they’ve been worn differently. Sometimes there are stains. But they provide a basis of familiarity for characters to latch onto while still leaving enough room for them to throw in the ideas that set their imagination on fire.

All of this is really vague, so let me bring it back down to a concrete example.

You’ve created a world with a whole kingdom for the players to occupy. You’ve mapped out all the duchies, baronies, counties, and marches. You’ve got the royal lineage dating back three centuries, and all the wars, alliances, and coats of arms to go with them. You know that the only heir to the kingdom is secretly in love with his page, and that he’s preparing to run away from an arranged marriage to live his life as a traveling minstrel (huge tracts of land optional).

Your setting book lands on the table with a resounding thump, and you ask your players what their character concepts are. One of those players says they want to play the heir to the kingdom–their concept is a royal paladin who feels burdened by the enormous responsibility she’s getting ready to shoulder, and feels like she needs to spend some time righting wrongs among the people to understand what’s truly at stake.

Oops. At this point, you have two options, and neither of them are good.

Option 2 sounds like a good idea, until you realize:

Remembering Stuff is Hard (and Players Won’t do it Anyway)

People can only remember about 7 things they don’t already know at once. This is your attention budget; spend it wisely. If you have a whole book of homebrew nations, gods, factions, NPCs, custom classes, laws, species and languages, you’re already attentionally bankrupt before your players even hit the table.

It may not seem like that big of a deal from your perspective, because you know all of the details in and out, but here’s the thing: you already know it. Lovingly, word by word, twist by twist, unpronounceable name by unpronounceable name, you’ve already “paid” for all of this complexity, and your players haven’t. If they want to play in your world, they have to pass what one friend of mine calls “the Citizenship Test,” and that is even less fun than it sounds.

The easiest way around this is to use things the players already know. Using an established setting is a great way to do this–there’s a reason why licensed properties with passive media (like movies and TV shows) are so popular: they create whole worlds that thousands or millions of people are intimately familiar with and love right off the bat. Because the world information is leavened with plots, memorable characters, and story arcs, learning all of this information doesn’t feel like work.

This is the default approach of the fifth edition of The Game That Shall Not Be Named.

Here’s the thing though: the more material a world has, the more potential for overload you get. The Forgotten Realms has (according to my quick Wikipedia research) 291 novels of wildly varying quality; 173 comics, graphic novels and anthologies; 89 game supplements; and 74 (ish) video games. At this point, those realms are only “forgotten” because only a PhD in comparative RPG settings with a focus on R.A. Salvatore can remember all of that.

If players aren’t already familiar with all of the information you’re bringing to bear, they’re going to drown in detail, and quickly. Of course, it’s easy to say “just take the stuff you’re planning on using and leave the rest,” but there are two major problems with this approach.

You know what doesn’t have all of these problems? ClichÃ©. “This is an elven forest city” requires exactly zero processing for anyone with any mainstream media exposure whatsoever. At this point, “The Tower of Evil” is basically as well known as Washington, D.C., and frequently for the same reasons. Throw a few well-worn tropes together, and you’ve got enough world for your players to run around in. No citizenship test required.

Using ClichÃ© Keeps You Out of the Lazy Sandbox

“If you want to bake an apple pie from scratch, first, you must first create the universe” makes a really great nerd anthem, but is terrible advice for RPGs. As a GM it is incredibly satisfying to set up enormous overarching conflicts that span continents and planes of existence. “The Empire of Evilomor has nearly crushed the small, plucky Protagonistia Kingdom” is an okay backdrop for a game, but doesn’t provide much more of a place for the characters to interact than a detailed description of the weather.

I cannot count the number of “sandbox” games I’ve seen grind to a halt without ever really taking off because the GM spent all of their energy creating dozens of pages of setting without putting any accessible conflict in it. It’s me. I’m the GM that happened to.

Â I cannot count the number of “sandbox” games I’ve seen grind to a halt without ever really taking off because the GM spent all of their energy creating dozens of pages of setting without putting any accessible conflict in it. It’s me. I’m the GM that happened to.Â

The characters may have an understanding of the overall geopolitical or religious background (if you’ve “budgeted” for it), but gameplay happens as a series of roleplaying moments, resource spends, and rolls. Those moments take place within challenges and obstacles, which take place within scenes.

If I’m being completely honest, it’s way more fun to make the overarching conflicts than it is to balance an encounter, and that’s why it’s dangerous. There are only so many hours you have available for game prep, and the more time you spend putting together the world (rather than a mishmash of tropes), the less time you’re spending on things that the players can actually do. Put another way: worldbuilding can be fun for the GM, but encounter-building is what makes things fun for the players. Make sure you’re creating a world your players can interact with, not a lecture on how creative you are.

The advantage of using well-worn clichÃ©s with this approach is that you can take a “bottom-up” approach to game prep. You can start with exciting combat encounters, cool maps, puzzles, or unique environmental challenges, then figure out how to slot them into a world that’s more possibility than an exposition dump.

I’ve already used too many words, so I’ll stop here. What do you think? Are you inspired to use guilt-free clichÃ©s in your game now?

3 Responses to The Power of ClichÃ©: Why Being Original Isn’t as Important as Being Interesting