Today’s guest article is by Ross Watson of Evil Beagle Games, and it talks about a Game Mastering technique used in their new kickstarter for Aaron Allston’s Strike Force which has writing from Steve Kenson, Sean Patrick Fannon, and Michael Surbrook in it. — John A. 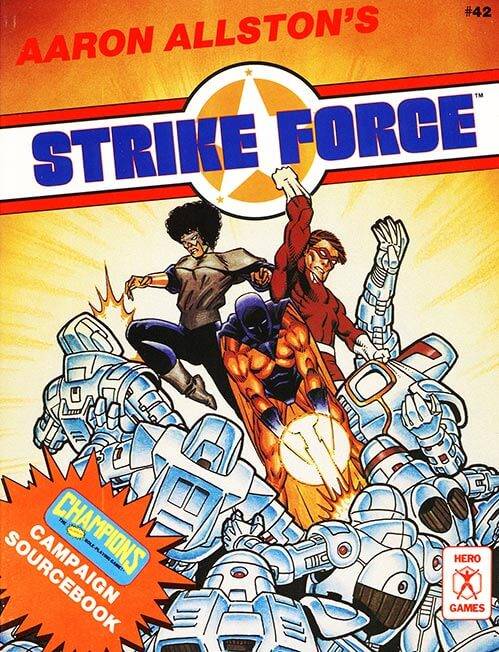 The old school Strike Force book was a great source of inspiration.

There’s a gamemastering technique, known as “Blue-booking,” that has enriched many of my long-term RPG campaigns over the years. I learned this technique from reading Aaron Allston’s milestone RPG supplement, Strike Force, back in the early 90’s. As described in Strike Force, the technique’s name came from blue notebooks that each of Aaron’s players used to record thoughts and notes about what their characters were doing in-between gaming sessions.

The idea that the game doesn’t have to stop once you leave the table was revolutionary–at the time when Strike Force came out, it was 1988. Pre-internet, pre-widespread access to e-mail, pre-cell phones, and Aaron was coming up with ways to encourage his players to think of themselves and the game as a community, as an ongoing story that they could participate in almost any time. That’s the power of blue-booking.

So, what exactly is blue-booking, and how do you use it? At its core, blue-booking is providing a framework for players to engage with the game outside of actions at the table during a session. Often, but not always, blue-booking takes the form of emails, forum posts, or other communication exchanged with the gamemaster and the other players. Typically, blue-booking is performed in-character, with asides for the players or gamemaster to clarify rules or in-game issues relevant to the discussion.

Blue-booking is a great tool to create one of the most valuable elements of a long-term RPG campaign: immersion. You can accomplish this by using blue-booking for things like shared fiction describing the actions of characters “off-screen,” or for the gamemaster to issue various updates about the game setting… even glimpses of what the antagonists are up to! Blue-booking is also a great way to engage in roleplaying situations that could be potentially awkward at the game table, such as exploring romance, intense social issues, or even dealing with mental or psychological challenges (like the death of a loved one, or the realization that a character’s powers are slowly driving them mad).

My gaming groups and I have used blue-booking extensively over the years, but the moments I remember most about blue-booking come from an RPG campaign of mine called Shadows Angelus. In this game, the players took on the roles of super-powered policemen battling against Lovecraftian horrors in a cyberpunk city. The themes and tropes of the campaign were mature, often oriented towards exploring social problems, suspense, and horror (both cosmic and personal).

Blue-booking helped me build a sense of immersion in the game right from the start. I created essays on the home city and the police force, wrote stories about the villains making plans, and helped one of my players (the estimable Michael Surbrook) construct a website for the campaign. The other players responded very well to this, and soon we flooded the webpage with over ninety individual contributions, ranging from personal stories to collaborative fiction. When I ran a follow-up to the first campaign, the players jumped right in once more, writing over a dozen stories before the first session even began.

As a gamemaster, I saw this as a fantastic opportunity to incorporate the players’ expectations and preferences into the game. For example, many of the pre-game stories generated for Shadows Angelus II revolved around the players’ plans to look for a missing NPC. I used that information to create a very memorable opening game, and my players were exhilarated that their own creations were having an impact on the game world. 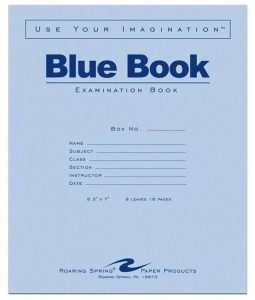 Blue-booking helps the game feel, for lack of a better word, alive. Taking time away from events directly witnessed at the table to follow a moment in the life of a minor NPC, track what one of the player characters does in his spare time, or examine what’s happening in the villain’s lair can make the game world seem like it reacts and changes based on the players’ choices. Also, blue-booking works well with schedules of busy adults–we don’t always have time for a deep and immersive 8-hour gaming session. However, it is generally not too difficult to send an e-mail or two in between sessions to keep up with what your character is up to when he’s not adventuring.

Blue-booking works best for long-term RPG campaigns. Shorter campaigns, one-shots, and adventure paths generally don’t benefit as much. Also, blue-booking isn’t for every group, due to the time commitment involved. However, players who are very creative and engaged with the setting may find it–as I did–an incredibly satisfying tool to make the campaign unforgettable.

5 Responses to The Power of Blue-Booking