The Other Side of the Screen: GMs Should Play More 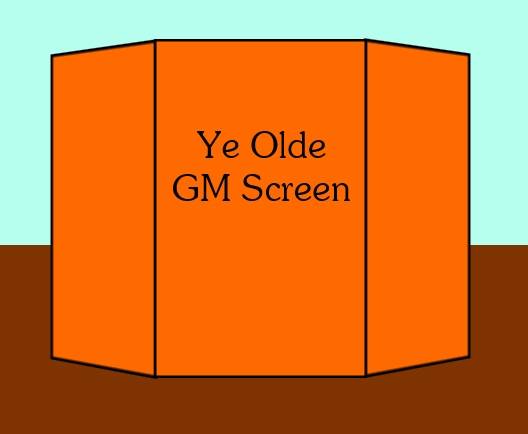 Many gamemasters run games for months or even yearsÂ without ever sitting on the other side of the screen. Â Often the reasons are logistical. Â Players are happy as players and with the GM. Â Players may also be too busy to GM. Â Also, if you are trying to build a group with new players or using a new system, you may have to GM. Â After all, you’re the only person who knows the system. Â You may not have time to run your own campaign and then play in another. Â With online virtual tabletops, a person could play as much as they want. Â However, most of us have to eat, make sure our households are running, etc….
Some of the reasons are more personal. Â Most GM’s enjoy the creative process. Â Drawing maps, designing terrain, and painting minis are hobbies unto themselves. Â Beyond that, being a GM provides more control over a game than playing does. Â Even without strict railroading and limiting player choices, a GM can still guide the game in certain directions (hopefully to where the fun is.) Â A simple “that room is empty” can get players to the lava bridge faster and keep the pace up. Â As a player, we give up that sense of control and hope for the best. Â  It can be a bit frightening, but it may help us improve as GM’s.
Let me share a few situations from the other side of the screen, and some lessons I hopefully learned.

At a recent game day, I played the dice game Dungeon Roll. Â It’s a simple, fun system, but there’s enough complexity and strategy to confuse a new player. Â Luckily both the person running the game and the other players were able to help me through my rules difficulties. Â However, there were still moments when I felt confused. Â It was like a teacher taking a course as a student: what seems clear to the presenter may not be so clear to the listener.
This experience reminded me to be better about explaining rules and rolls in my games. Â As much as possible, I try to say things like “Roll a 20-sided die and get over your saving throw.” Â (In fact, specifying over or under is important. Â Some older systems use both for different rolls.) Â For very new players, you may want to explain the results of the roll. Â Tell them that they rolled over their opponents defense, so now they get to roll for damage. Â More experienced players will often pitch in to help newer players at the table. Â They are doing everyone a favor and helping improve the mood at the table. Â Also, avoiding jargon is important for new players. Â Using terms like “d20” or “percentile dice” isn’t going to help someone who doesn’t know which die is which. Â  All of these suggestions can help players feel more comfortable with the process.

Even if you are very familiar with a system, you may still learn a lot Â as a player. Â For example, while I am very familiar with old school fantasy systems, I had never used multiple six-sided dice to control the difficulty of ability checks. Â The GM even had mini-dice in little jars and just handed them to the players when needed. Â So I learned both a new approach to doing things, and a neat way to make it easy for players.
Sitting at someone else’s table let’s us see different approaches even to our favorite systems. Â For example, some GM’s might play the game much looser and lighter than you are used to, and you can decide whether that would help your home game. Â Perhaps you always play with maps and minis, and you play in a game that is more “theater of the mind”. Â Even if you don’t switch the format of your game, you may still learn new storytelling techniques. Â And of course, the reverse is true. I usually run things fairly fast and loose, and was surprised how much I enjoyed a game that used gridded combat.

PLAYING UNDER A NEW GM

When I first started GMing, I was a little self-conscious about speaking in character for NPC’s (It can seem a bit silly). Â However, after seeing a GM who used all kinds of different voices and mannerisms for his NPC’s, I was sold on the concept. Â If you are already playing a game with elves or aliens, what’s a few funny voices among friends? Â If I hadn’t played with that particular GM, I might be more reserved than I am today.
Besides rules and storytelling techniques, you can watch how different GM’s handle the other players. Â I saw one fellow who was masterfully low-key when dealing with a scene hog. Â He just let him do what he wanted, but didn’t let it bog down the game for other players. Â He just hand-waved and said that the player’s theatrics succeeded in minor ways and moved on.
And of course, lastly, you might find something in another GM’s style that you want to avoid. Â You might notice that they have trouble wrapping up because they have a predetermined outcome in mind, don’t resolve combat in a timely manner, or let the game bog down when a subtle hint would keep things moving. Â You may recognize some bad habits that you have, or at least find things that you want to avoid. Â I’m not suggesting mentally beating up another GM. Â It’s a hard job no matter the group. Â We should always look for what other GM’s do right, and try to borrow those techniques. Â Realistically, however, we will see things that we think could have gone better. Â I wouldn’t tell the other GM those things, but keep them in the back of your mind next time you are behind the screen.
Do you have any other thoughts on GM’s needing to play more? Â Share them below.
This post is brought to you by our wonderful patron Rob Abrazado, supporting us since July 2016! Thanks for helping us keep the stew fires going!

8 Responses to The Other Side of the Screen: GMs Should Play More