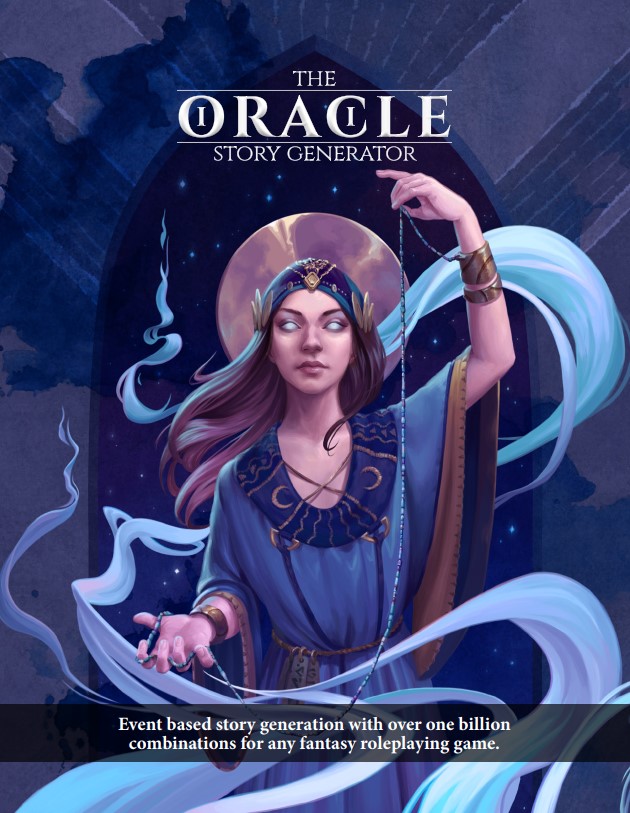 If you show me a card-based accessory to a roleplaying game, it becomes very difficult for me to turn down that accessory. Ironically, if it’s an optional component or an add-on to the main game, which can function without the cards, I’m probably more likely to pick up the deck. I’m also an easy mark for tarot-sized cards.

That’s why I ended up backing The Oracle Story Generator cards on Kickstarter when it first ran. The concept behind the cards is that you pull several cards, which are based on specific themes, and you get a fairly detailed sentence outlining an adventure for a fantasy roleplaying game. 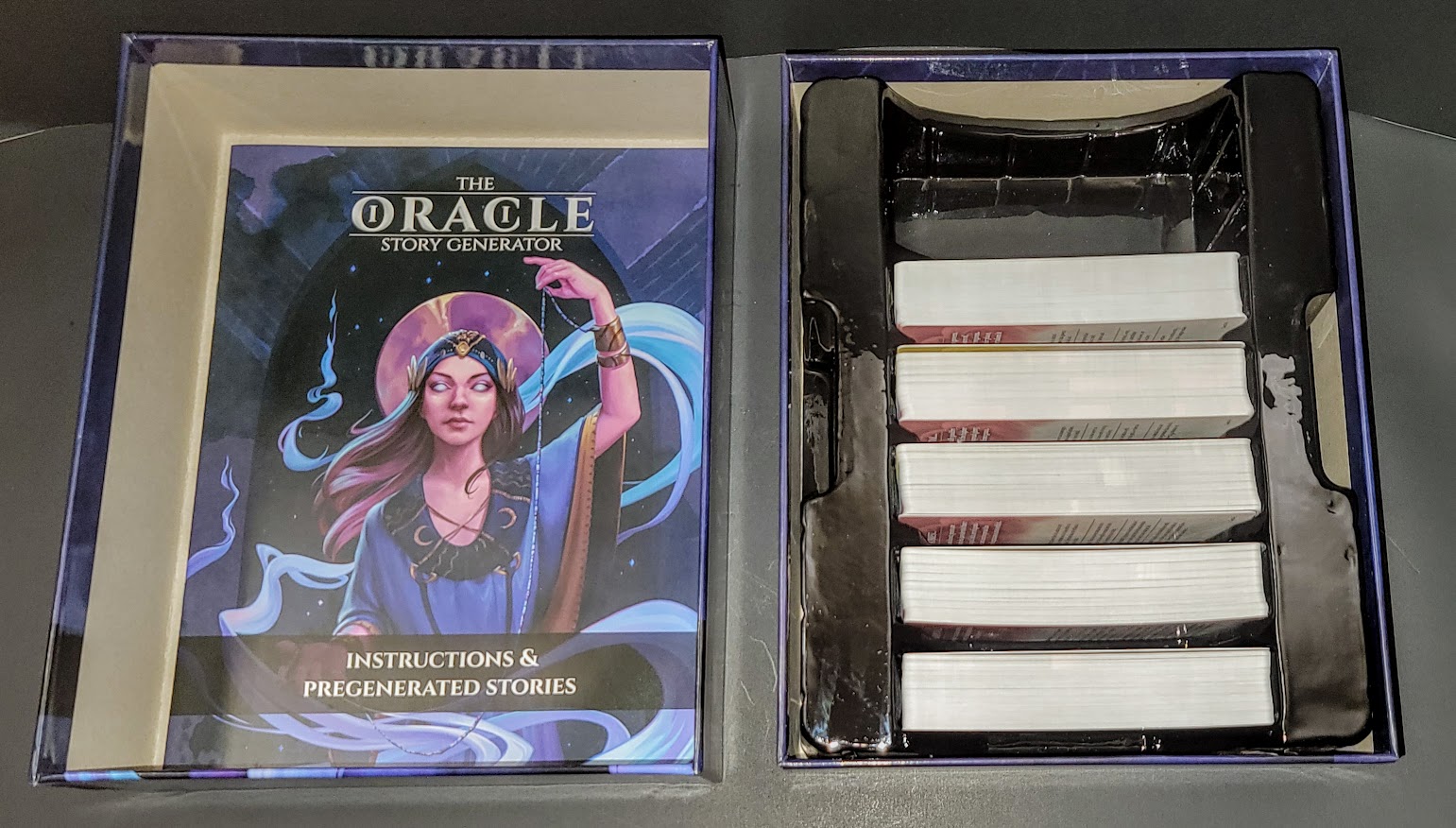 I backed this project on Kickstarter, and my review is based on the version I received as a backer of the crowdfunding campaign. I have not had the opportunity to plan an adventure for one of my campaigns using these cards, but that’s mainly because I’ve had the next few sessions mapped out for a while. I have used the cards to generate some scenarios to see what they look like.

What’s In the Box?

I ordered the full boxed set, which includes the following decks:

The box that holds the deck is very solid cardboard, and includes a plastic insert that holds each of the decks, with room for expansion. In addition to the decks, there is a 134-page instruction booklet that comes with the box, which includes all of the prompts that appear on the cards, as well a selection of pre-generated adventures broken up into a three-act structure. 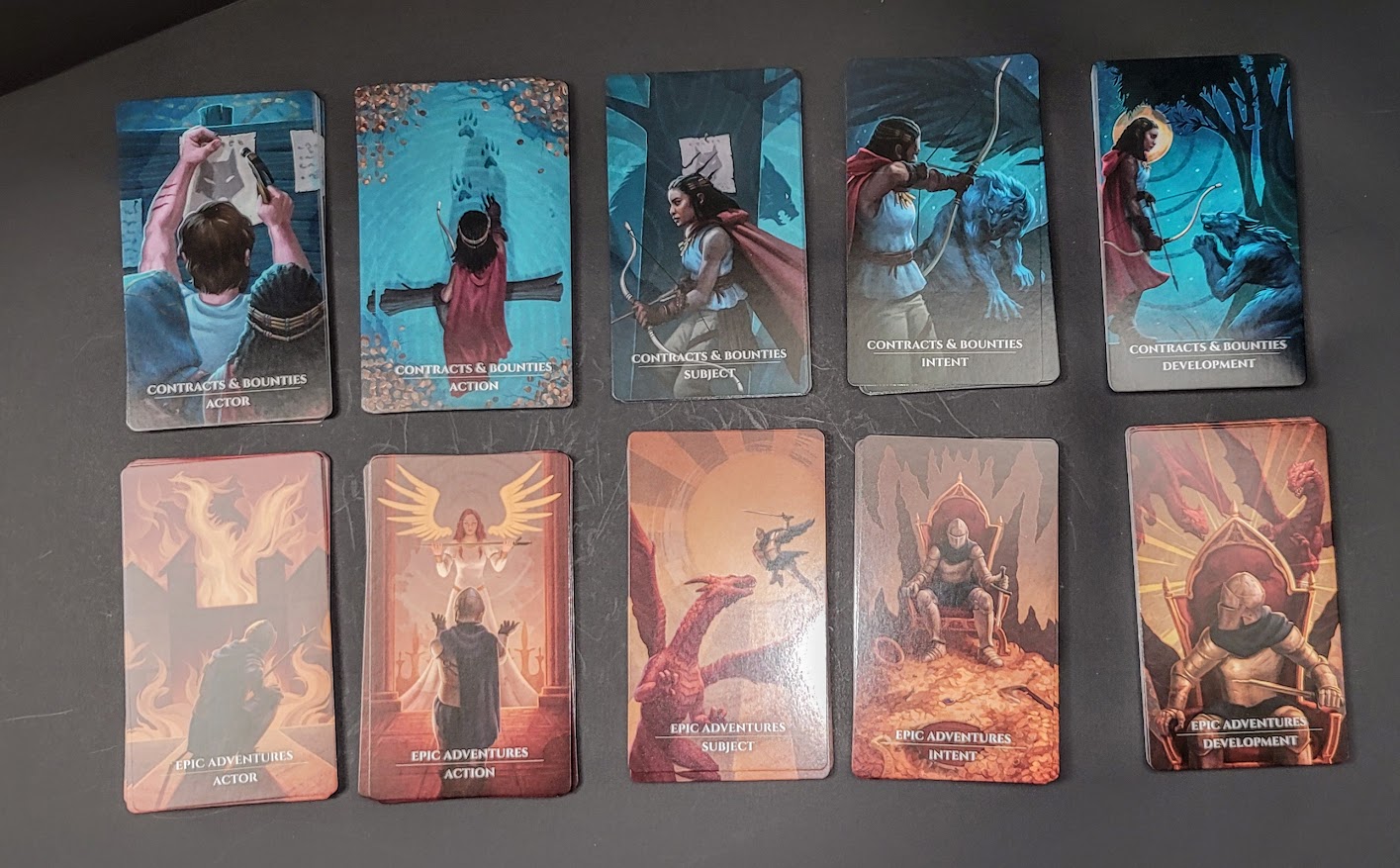 Each of the decks has the following card types. You draw one of each, to form your sentence that outlines what the adventure is about. Each one of these categories has twelve cards, meaning that a full deck is 60 cards.

There are four variations under each card. For example, the main card may say A Leader, but if  you want more details, there are four options under that category that will subdivide that option into Mayor, High Priest, Noble, or Monarch. Since these are prompts, you don’t need to “drill down” further if you already have a good idea that matches the general theme of the card. That said, those four subcategories help to add variety to your card draws and give you more versatility in using the decks repeatedly for a game.

I do want to spend some time talking about some of these prompts, because even with the instruction booklet, there isn’t much of a discussion of safety or content calibration. This is important, because some of the prompts are less than heroic, and include content that may not be comfortable for players. If the game facilitator is using these to create adventures during their prep, they will need to have a strong grasp on any lines or veils the players have expressed.

As an example, the Contracts and Bounties deck has the following “actions” (among others):

While there may be other decks that include plot points that could be on different player’s lines and veils lists, I feel like having a potential employer explicitly hiring the character to plan for colonization, displacement, and enslavement is going to be asking a lot upfront. At the very least, wondering why the party has a reputation that would lead someone to assume they would be okay with that kind of job. 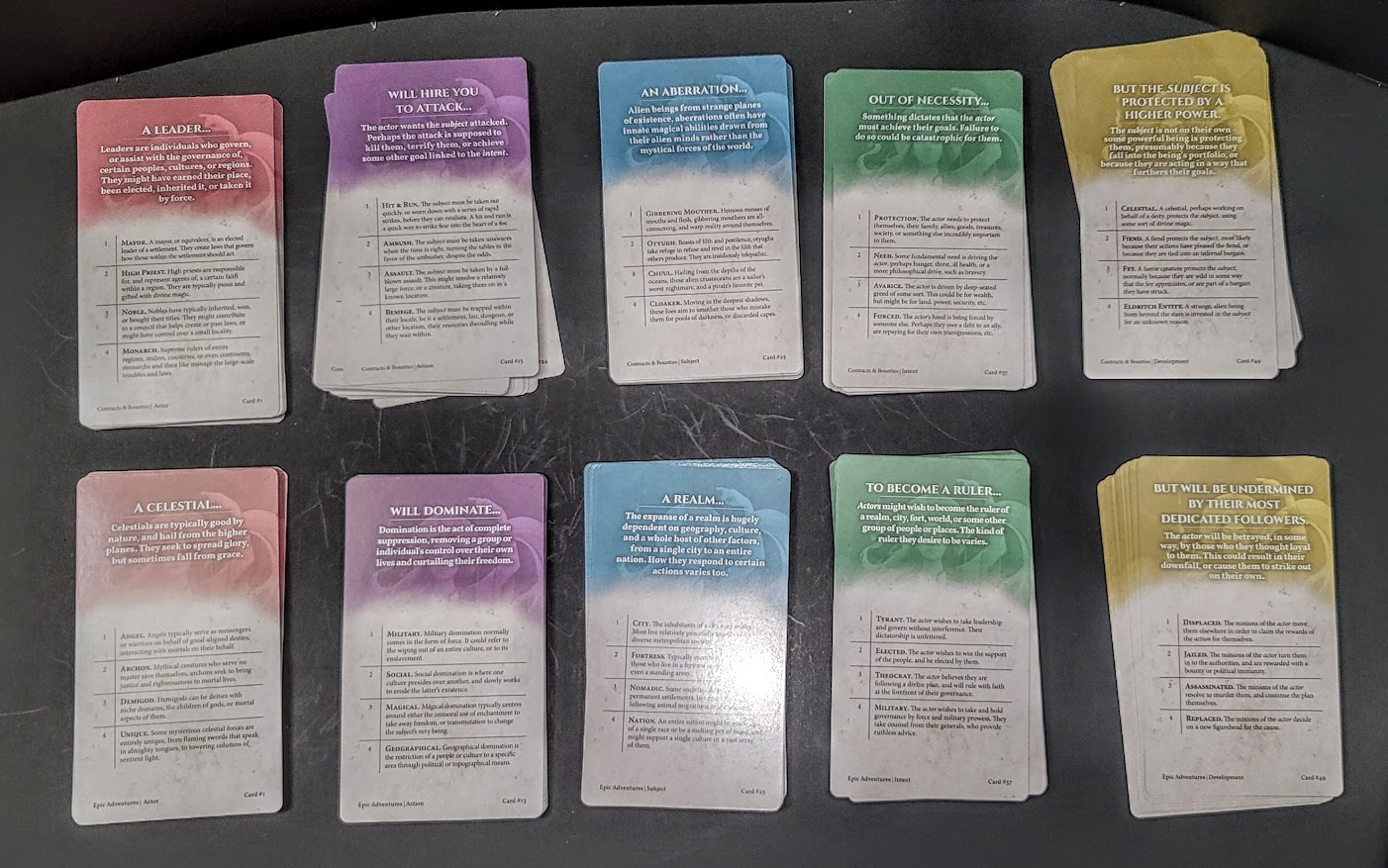 The booklet that comes with the boxed set includes a table of contents with a half page of instructions, a page of instructions to help guide the game facilitator into turning those prompts into an adventure with a three-act structure, explaining the basics of the storytelling format for anyone unfamiliar.

The next section of the booklet details the contents of the individual cards for all of the decks. The first page of each section is formatted with a d12 table, in case you want to roll your prompts instead of drawing cards. These pages also appear in the individual PDFs for the decks, if you pick up the PDFs instead of the physical cards.

The final section of the booklet includes 25 different adventure outlines, each one broken into a three-act structure, with some example hooks for pulling the player characters into the adventure, and some non-player characters to add to the scenario. The prompts for these scenarios are listed at the top of the adventure, and each one is based on the prompts from one of the individual decks in the set.

The prompts on the cards are generally applicable to a wide range of fantasy settings, but the pregenerated stories add in some monsters and other details that are very clearly drawn from D&D. In most cases, it’s pretty easy to swap out D&D-distinctive creatures for something similar, but it’s worth noting that the stories do assume a D&D baseline for the fantasy stories being fleshed out.

This set looks and feels amazing. The box is sturdy, the cards are colorful, and the art is attractive. Most of the prompts are specific enough to give you variety, but broad enough to give you flexibility. While I’m often reacting to the players in my campaigns, it’s very useful to have some ideas to bounce off yourself to see what sticks. I’m very happy with how this boxed set turned out.

Trouble Forecasted
This set satisfies my urge to play with fun gadgets that can facilitate roleplaying prep.

I wish the bounties “actions” had been a little more restrained, and geared towards adventurers that have a reputation that would preclude some of those jobs. I would also have liked a little bit of discussion in the booklet to describe safety tools and calibration in games.

This set satisfies my urge to play with fun gadgets that can facilitate roleplaying prep. I think if you like tactile items to use with your gaming, you will be very happy with this, and if you just want a wide range of prompts, the PDF version of the decks will likely be useful to you as well. It’s just going to take some additional game facilitator know-how to avoid some of the pitfalls that can come with results generated without direct player input.