Online, virtual tabletops (VTT’s) now allow more people to game than ever before. Â Regardless of geography, or work and family commitments, it’s possible for almost everyone to find a game that fits their needs. Â This article is the first in a series examining different aspects of being an online GM. Â Even if you don’t play online, hopefully you can find some food for thought here.

Let’s first look at traditional, top-down maps. Â These are the gridded maps we’ve all loved for decades. Â Online VTT’s allow you to upload large, detailed maps without the expense of printing. Â A GM can often pre-load the map, expand it to a convenient size, black out the areas that they don’t want players to see, and even hide NPC’s and monsters on a “GM-only” hidden layer.

You can find more maps than you’ll ever need online, or you can generate your own using any graphics program. Â Two online map makers that I use are:

The first generates random dungeons, and the second allows you to draw your own. Â Top-down maps for VTT’s have some advantages and concerns that we should look at. 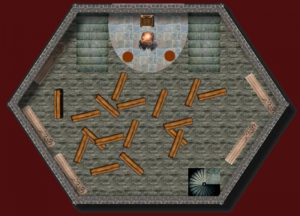 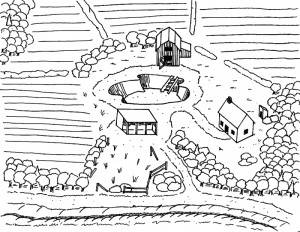 Often tabletop games are played by having the DM sketch the map on paper or a grid sheet during play. Â VTT’s usually have freehand drawing tools to help you do this as well. Â A small graphics tablet makes things easier, but in a pinch you can use the mouse. Â This “on-the-fly” mapping has at least a couple of advantages.

Next time we’ll discuss other types of images you may want to use. Â We’ll look at background images, area maps, and player handouts. Â Until then, let us know what your thoughts are on this column below.