The Most Important Word In Your Game Is Why 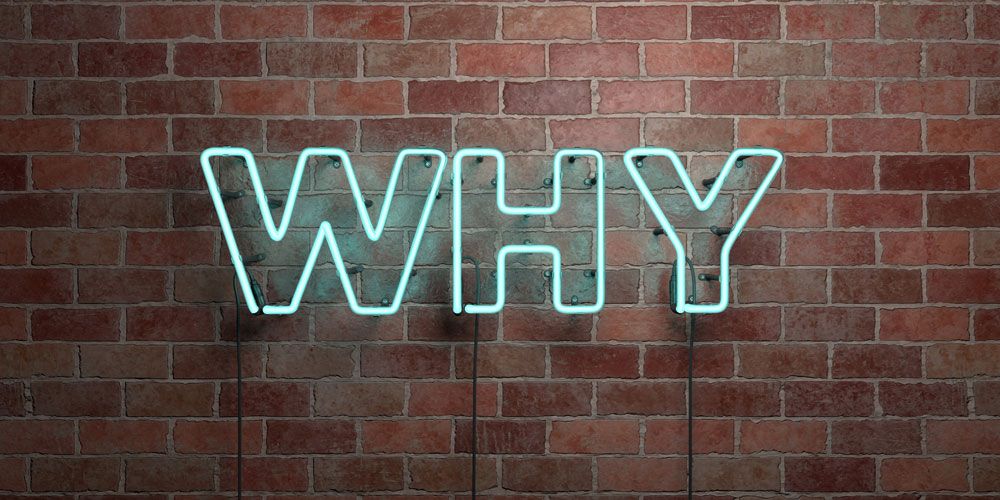 There is one word you should pay particular attention to as a Game Master whenever you are running your game. It sounds dramatic, but this one word is often going to be the key to a mediocre game or a good game. It applies in the game world and in the meta of the game and keeping it front and center in your mind while you run games will create far smoother and more enjoyable play experiences. That one word is WHY.

WHY is the reason the players are being ambushed on the road. WHY is the driving force behind the main villain. WHY is the focus of the player when they come up with their crazy plan to fire an arrow and rope dipped in oil. The other interrogative words are important, but WHY is their leader and the first thing that needs to be understood.

The old acting trope (and joke) of “What’s my motivation?” is an important implementation of WHY. In relation to gaming, it slots in with both the META and the IN-GAME elements that occur. Take, for example, a basic random encounter for first time out first level fantasy characters. They are traveling on the road and you decide to roll on the random encounter table. A pack of wolves and bandits attack them while they are camping. A common occurrence, and fairly boring in its implementation. The players could just tackle the combat and move on, gaining a bit more EXP and currency and forgetting about it altogether. Throw a handful of WHY questions at it though.

WHY is the gateway question 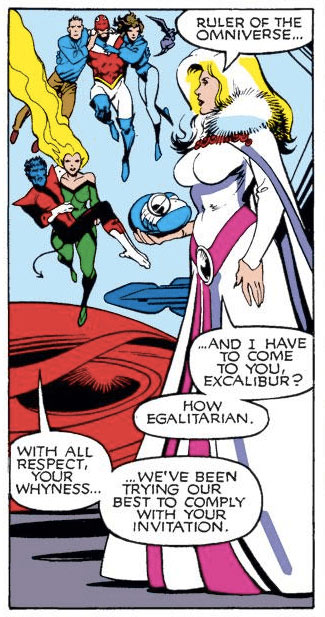 The omniversal majestrix Opal Luna Saturnyne is referred to as her WHYness in the comic Excalibur. – Issue 24 of the 1988 run of Excalibur – art by Alan Davis and story by Chris Clairemont

It’s obvious that throwing a bunch of WHY questions at any part of  your game leads to a lot more questions, but those questions need to be asked if you want the element you are looking at to really shine. “Why does this element deserve so much focus?” is a great question as well. Should this random encounter steal focus? Maybe you decide the note the bandits have should be just a bit of window dressing and not pull the PCs off the path they are on. You can throw in enough exposition to showcase it for what it is rather than an open point. WHY as the gateway leads you to HOW to make sure the players know this is a sidequest with a quest complete banner popping up.

You had planned the note to say:

“Bring me the magic sword and make sure it is the right one this time. Use the scrolls, but remember they are expensive.”

Realizing it is very open ended you add:

“I have a noble willing to play a lot of money, but only if it was crafted by Miyagashi and is capable of wielding the abyssal fire.”

Sure, the players may find that morsel tantalizing, but now you have enough info to tell them they could reasonably determine that has nothing to do with the quest to retrieve the stolen crown that will only glow when on a person of royal blood.

WHY is where you get into all the other things you hadn’t already been asking yourself and how you decide what things to showcase.

WHY when focused on the players

WHY is also a phenomenal question to apply to the players and their characters. It’s great to ask when the rogue is detailing out a complex plan of dipping a rope in oil and attaching it to an arrow in a VERY specific way. You can interrupt (kindly) and ask “Ok, WHY is Aven doing this? What are you trying to achieve? What’s the end goal?” to get at the truly important part. When Aven’s player says they want to hit the flying owl beast and hope the rope catches on one of the campfires, now you know what they intend. The long explanation was likely to sew up any loose points and make sure they could pull off what they wanted, but if you don’t know what they wanted you can’t decide to help that along. You can then jump to the WHY of the player wanting to take out that owl beast in a spectacular way. Maybe they think it’s far tougher than it is, maybe they believe it will sow chaos to have a flying giant owl that’s on fire in the battle (it would). You can straight up ask them WHY they want to do this rather than just shoot it with the crossbow and with light shone on that secret motivation, you can decide all the other factors of the situation. Would it be likely to succeed? Would it be more fun? Would it be heartbreaking to say no or to not let it have some effect? Would it actually instantly take out the 5 hp owl  and thus ruin the player’s plan?

Without focusing that light on the intention, all that stays in the dark. Asking the question also lets you think about the WHY of the way the player tried to do it. Why did they describe it in a long winded way? To justify that it was well thought out? Why didn’t they just ask to shoot an oil soaked rope and arrow combo at the owl to set it on fire and cause chaos in the battlefield? Maybe the player is feeling anxiety from experiences in a different game and having everything questioned. Now that you’ve thought about that possibility, you can lay some better foundations for communication.

“If you have a crazy idea, feel free to tell me what you’re trying to accomplish. I won’t shoot it down unless it’s waaaay outside the realm of possibility. This is a game where clever means the difference between winning and losing, so throw those ideas at me.”

When you focus WHY on problems with the players, you can also find solutions. When the player says the “I’m just playing my character and how they would do it.” in that way that accompanies a gear grinding, game stopping type of moment you can use WHY as the lever to get at what’s going on behind the scenes. Why does the player feel the need to throw a wrench into things? Is their character actually that defined and does that mean they feel they aren’t being acknowledged? Are they just acting out and deriving joy from wrecking the game? Should they be in the game? Is it bugging the other players? Is it bugging you more than it should? Is it something else entirely that you need to address or have you misread the situation? When you ask “Can you expand on that?” does it shine a light on the reasoning? Will it keep being a problem going on? Starting with WHY also removes you a bit from the situation. It helps you empathize and realize that there is a reason behind the action. It moves you a step back so you can see a bigger picture.

Why is a powerful tool. It opens up all the other questions surrounding an element or situation. It lets you pull yourself back and look at the bigger picture. It also helps you decide what is worth focusing your time and efforts on. It may seem rudimentary, and it is, but we all need to go back to the basics and relearn the foundational stuff from time to time. WHY gets at a deeper look into your game and that’s never a bad thing to do. To be dramatic a bit, socrates said “The unexamined life is not worth living” and maybe the unexamined game could be a lot better by poking at it with the crowbar of WHY and getting a peek under the hood. Do you find yourself asking the WHY of elements of your game, even if you use different terminology? What games have you run that might have been better with a bit of WHY thrown in to shine some light on things?
This post is brought to you by our wonderful patron Fabrice Boulakia, supporting us since December 2018! Thanks for helping us keep the stew fires going!