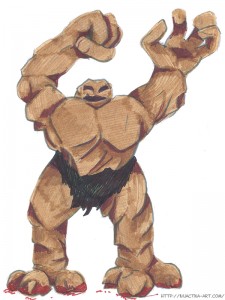 He even has gnome bits on his feet. (Drawn by our monk, Chris Mann)

As GMs, we plan and plot, putting together adventures we hope will entertain and challenge our players. Occasionally we carefully measure the stats of an encounter, working to create an epic fight that should challenge and reward everyone involved. And occasionally the players walk into just such a carefully crafted encounter and one-shot the monster.

I’ve been running an off-and-on Eberron game using Pathfinder mechanics for about a year and a half now. Eberron is my favorite D&D setting, allowing for the perfect mix of magic and steam punk in a politically complex world that is ripe for an epic story line. In this game, the characters are (mostly) veterans of a renowned mercenary company that fought for Breland during the Last War. Three years after the end of the war, they reunited for an anniversary celebration and were quickly caught up in a quest to prevent artifacts scattered across the globe from falling into the wrong hands. The game is my attempt at creating an epic game for my players, and so far, it seems to be working.

The most recent game night had the group fighting off assassins in the middle of the night and then traveling to the Library of Korranberg to get much needed information about the remote and dangerous home of the dragons, Argonnessen. If they had to travel there, they wanted to be prepared. A friendly NPC had referred them to a gnome scholar at the library, but they had also been warned that he could be a bit … anti-social. As they arrived, he was in the midst of berating underlings for a problem that had apparently gotten out of control. Before the players could even get in a word edgewise, he’d slammed the door in their faces. Eventually they piqued his curiosity and coaxed him to open the door again. He declared that since they thought they were capable of going to Argonnessen, they should be capable of dealing with a berserk golem loose in an artificer’s workshop on one of the lower levels. If they took care of that problem, he would be willing to answer their questions.

I had set this up carefully. The team was a party of six 8th level characters. They were decently equipped and they always work well together, so they would be challenged but capable of handling the encounter. A clay golem is CR 10 due to a fun mix of damage resistance, magic immunity to anything that allows spell resistance, and it deals cursed damage that resists magical healing. The scholar they needed to talk to also declared that they were not allowed to use any fire magic. It was a library, after all. This is a particularly big point for this group since they include an elemental witch, a fire oracle, and an evoker wizard. In the course of one round, they can get off three fireballs with another round of them in reserve. An unfortunate group of hapless bandits discovered this particular fact during a previous adventure.

If they’d rushed right in to deal with the golem, it would have been a tough fight, but this group is smarter than that. They quickly determined that the library’s guards and wizards had the golem contained for the time being, allowing them the chance to do some research. A couple of knowledge checks determined that they knew just enough about golems to realize they didn’t know enough. Being in the largest library on Khorvaire, they sought out an expert on golems and learned what they could about clay golems. While they’re resistant to most magic, earth movement and disintegrate spells can cause significant damage, but acid spells would actually heal the damn thing. Additionally, while they are incredibly difficult to damage (DR10), adamantine or bludgeoning weapons would hurt it normally.

At that last piece of knowledge, the gunslinger’s face lit up. When outfitting his character at the very beginning of the campaign, he’d purchased a number of adamantine bullets, thinking they did more damage than normal ammunition. Once he discovered they didn’t  he’d switched to using normal bullets but he never sold off the adamantine bullets. This was the perfect opportunity to use them. In addition, the group rushed out to acquire some blunt weapons, and the wizard bartered for a scroll of disintegration (since all of her spells involved fire or acid).

Within an hour they were down at the entrance to the workshop. I took care to describe the sounds of the creature rampaging in the now destroyed workshop while gnomish guards and wizards kept the entrance vigilantly warded. Throwing the doors open, they could see the lumpy, brownish, grayish golem as it smashed furniture to smithereens with the bloody remnants of its previous owner on his feet.

Going at the top of the initiative order, the gunslinger stepped into the room and took aim, firing his enchanted pepperbox at the golem. He rolled a 19, but had recently purchased Improved Critical. Barely containing his glee, he rolled again, confirming the crit. After calculating all the bonuses he had from buffs and special abilities, he rolled 8d8+64 to get a total of 89. One action into the combat and my big, bad, scary monster had 12 hit points left. The monk and the cavalier each took their turns and before the creature even got a chance to bellow incoherently at them, he was a pile of deactivated sludge.

On one hand, my carefully crafted encounter was in pieces around me. I’d spent time setting up the encounter just so, making sure that they were challenged but not completely outclassed. There was a temptation to fudge things a little and let the golem have some extra hit points to keep going a little longer. Or even have there be a second one hidden around the corner.

But on the other hand, there was the look on my players’ faces. They had gone at the challenge intelligently and beaten a tough opponent with a minimum of fuss. They were the big damn heroes of the story and they’d just done something incredibly cool. There was no way I was going to take that away from them.

There are times when it may be okay for a GM to fudge things to stretch an encounter a little further, such as when it is an obvious, end-game ‘boss fight’, but sometimes it’s just as rewarding to let the players have their well won, if lucky, victory.