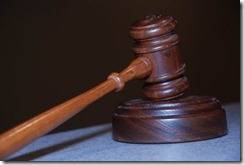 In many legal systems (particularly Anglo-American ones), a jury’s job is to answer questions of fact, while a judge’s job is to answer questions of law. This distinction is important, especially when a case is vague, convoluted, or has conflicting testimony and evidence. The lawyers build their cases (and tear down each other’s), and the jury uses the evidence to determine the facts of the case.

(If you’ve had some experience with the legal system, you already know this. Oh, and my apologies for your lost innocence.)

Many of us GMs love mysteries, especially the Big Reveal when the party finds out they’ve been barking up the wrong tree. But sometimes, as the party unravels the latest whodunit, they fixate on one or two pieces of evidence, or try to bend the facts to fit them to a predetermined conclusion. Even overwhelming evidence to the contrary will not dissuade them from their convictions.

This is potentially a Bad Thing. Because either the dots are too confused to connect, or the group is just incapable of connecting them, the whole awesome-until-this-point storyline is about to collapse.

One option at this point is to evolve, and let the chips fall where they may. If you as the GM can handle the fallout, and the party is going to survive their failure to connect the dots, then this may be your best option. Roll with it; failure can be fun.

But what if the party’s failure means The End Of The World As We Know It, or something equally disastrous, all because the GM underestimated the party’s ability to solve a mystery? (Or because someone didn’t take good notes.)

The Juror is someone the party trusts, who can help them determine questions of fact, usually by asking questions about the evidence (and the sources thereof). For instance: “Didn’t y’all just find out that the Ambassador of Upper Calumny has been lying the entire time?” or “Do you have proof that Finn McCool was the thief, or just a suspicion?”. Sometimes the party needs an objective (and trusted) view of their evidence to help them discern the facts behind it.

Use a light touch with your Juror NPC. Don’t point out the group’s mistakes, but ask the questions until they see them.

The Juror NPC approach has a few risks:

Have you ever used an NPC to help the party piece together the puzzle, or connect the dots, or complete a metaphor? Got any other advice to offer? Think it’s too much like railroading? Sound off in the comments and let us know!

10 Responses to The Juror NPC