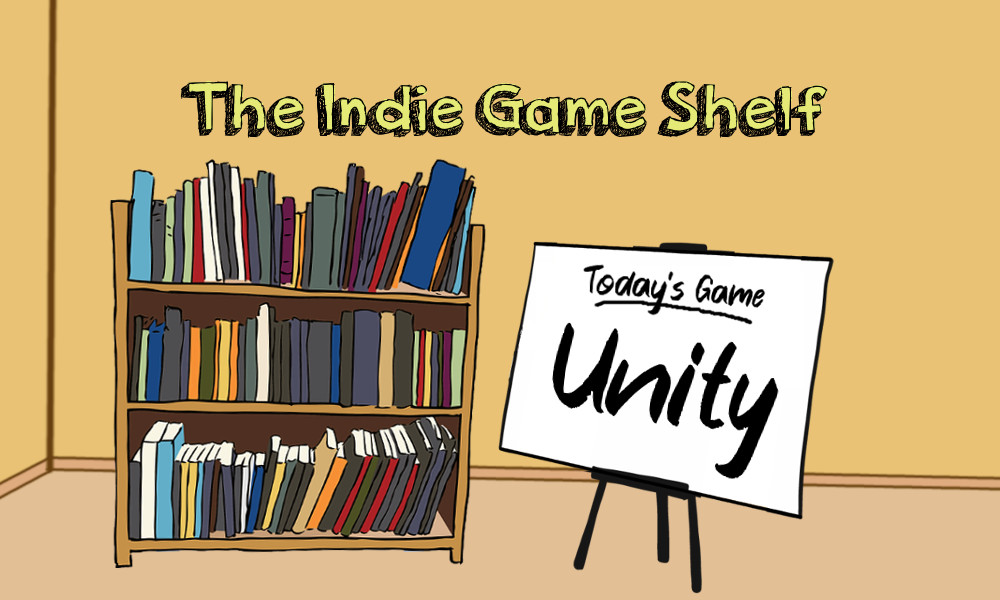 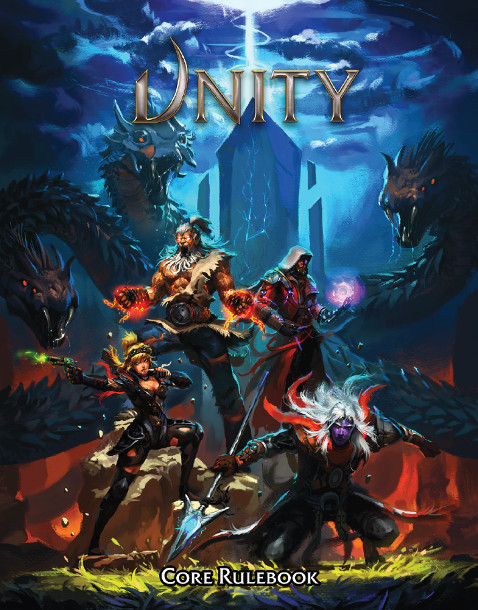 [1]Unity [2] by Anson Tran and Zensara Studios is a GMed fantasy roleplaying game designed for 3 or more players (including a Game Master) to experience adventure in an apocalyptic fantasy setting. The game book contains not only plenty of setting history, but also a generous portion of short fiction to help communicate the feel of the world. The book also features plenty of beautiful full color artwork by Nguyen Dang Hoang Tri and Raph Lomotan and is worth flipping through for that alone.

The rules structure of the game evokes the traditional school of RPG design, but it also makes use of some modern elements and streamlining techniques for a more cinematic feel. Though not, strictly speaking, a d20-based system, the rules are nonetheless built around the traditional polyhedral dice set, and the mechanisms will be familiar enough to anyone versed in d20-based games.

Rather than the game being narrowly focused on telling a particular story, Unity instead presents a detailed setting with a rich history. The text provides some recommendations for tone and theme, but the game otherwise offers an open invitation for a variety of play styles and narratives.

The setting of the game is the titular world of Unity, known to its denizens as a single continent bracketed by two oceans, themselves bordered by a (thus far) impenetrable wall of storms and whirlpools. In addition, the world of Unity shares space with the Drift, a spiritual plane fed by the psychic and emotional experiences of the inhabitants of Unity. The history of Unity is one largely punctuated by the primary gods of the world (the Skyfather and the Ivory Queen) screwing up the world by creating intelligent life on it. Get ready for a tale.

The gods first created the Valla, long-lived collectivists psychically linked together by Spirit Stones embedded in their foreheads. Unsatisfied with the Valla’s eventual lack of ambition to spread across the world, however, the gods then created the Furians, volcano-born craftspeople and warriors. Once the Valla and the Furians settled into peaceful trade relations, the gods tried again to create people who would finish the job of populating the world. The third attempt, the Humans, were made short-lived and vulnerable in an attempt to motivate them to thrive, which seemed to do the trick. Lacking the elder races’ divine physiological blessings, Humans learned to harness resources and develop technology, which put them on more equal footing with the others. Eventually, as happens, everyone went to war with each other.

The game can be played to focus on the struggle of physical survival, but it also makes room for the quest for an exploration of better lands as well as the examination of moral thought and quandaries.
Share18 [3]
Tweet5 [4]
Reddit1 [5]
Email [6]
The two gods, displeased by this development, reacted in different ways. The Skyfather disappeared and headed off to parts unknown. The Ivory Queen, encouraged by a whispered voice from somewhere beyond the void, decided to populate the world with horrible monsters to give all three races a common enemy to fight against. At first, this enemy, the Crimson Horde, did too good a job, nearly finishing off each of the earlier peoples. But in the end the Valla, Furians, and Humans banded together and drove the Horde out of civilized lands. This unification finally seemed like what the gods wanted, as it led to a Golden Age. However, the Children of Unity eventually turned their might against the gods themselves and killed the Ivory Queen.

This act of deicide caused the Skyfather to return…and return angry. Raging at what the Children of Unity had done, he smote the world and broke it. The spiritual realm of the Drift, which had been amassing terrible psychic energies not only from the people warring among each other, but now also against the Horde, cracked open and spilled onto the world of Unity in what came to be known as the Great Calamity. Demons poured forth from the Drift, the dead on Unity rose from their graves, the technological automata the Humans had created as labor-saving devices awakened to sentience and revolted, and the world filled with corruption and blight. In addition, all three Children of Unity were divinely cursed: the Valla lost their collective psychic link, the inner strength of the Furians was twisted into uncontrollable rage, and a number of Humans inherited a supernatural disease called the Phage which ultimately resulted in the formation of an additional subrace, the Afflicted.

It is into this world that the characters are thrust to begin their story. The world has been torn apart, literally and figuratively, by the Great Calamity. I call this apocalyptic rather than post-apocalyptic because the protagonists, like the societies of the world at large, are still trying to find their way in this new and dangerous situation. The world is wounded, but not dead. Dangers abound, but the people trying to survive still have access to martial might, mystical powers, and magical technology. A lot has gone poorly for the world, but a lot of hope remains. The game can be played to focus on the struggle of physical survival, but it also makes room for the quest for an exploration of better lands as well as the examination of moral thought and quandaries.

In terms of genre markers and tropes, the game draws from a variety of traditions. The way the game is presented makes it seem based primarily on familiar fantasy ideas: fantastic peoples and creatures, gods and magic, epic tales of good and evil, and the like. There are, however, also strong elements of horror presented, particularly cosmic horror, existential horror, and body horror. I stop just short of calling the game dark fantasy or fantasy horror…though only just. The elements are present, but it doesn’t feel like the action-oriented game is strongly pushing a fear-based tone that I associate with the horror genre. In addition, the Afflicted feature mechanical body part replacements or augmentations reminiscent of a game revolving around cybernetics, and some of the magical technology available includes gigantic war engines known as Titan Rigs for that dash of mecha aesthetic. There’s a lot going on in this game!

The rules and structure of mechanics in Unity are at minimum reminiscent of traditional design. Characters are defined by the combination of several elements: Race (one of the three Children of Unity races or the Afflicted), Class, four Attributes (Might, Agility, Mind, and Presence), and three Core Paths (fairly freeform backgrounds that take the place of a skill list). In addition, a character’s Class confers Features, Perks, and Powers which are the primary pieces that differentiate Classes from one another and which let characters engage with the rules with more than the core resolution rolls.

The primary resolution mechanic is a 2d10 + modifiers roll vs. a target number. The modifiers involve an Attack Rating and/or Defense Rating for combat rolls or Attribute and Core Path modifiers for skill checks. There is also a Benefit/Hindrance mechanic which includes an additional die to the pool which will either help (keep highest) or hinder (keep lowest) the result of the roll, as appropriate. Rolling doubles in combat introduces extra benefits, and rolling double tens is the equivalent of a critical hit (resulting in extra damage). The target number is generally an opponents Defense or Attack Rating (in combat) or a number based on the difficulty of the challenge (for skill checks).

Combat is based on rounds, as in many traditional designs, but the turns within the rounds are team-based such that all the player characters act together, and then the GM-controlled characters act together. Initiative is primarily decided narratively, though under certain circumstances it can be altered in the first round by skill checks. There is a familiar action economy per turn, with one each of different categories of actions available (Standard, Movement, Quick, and the like). 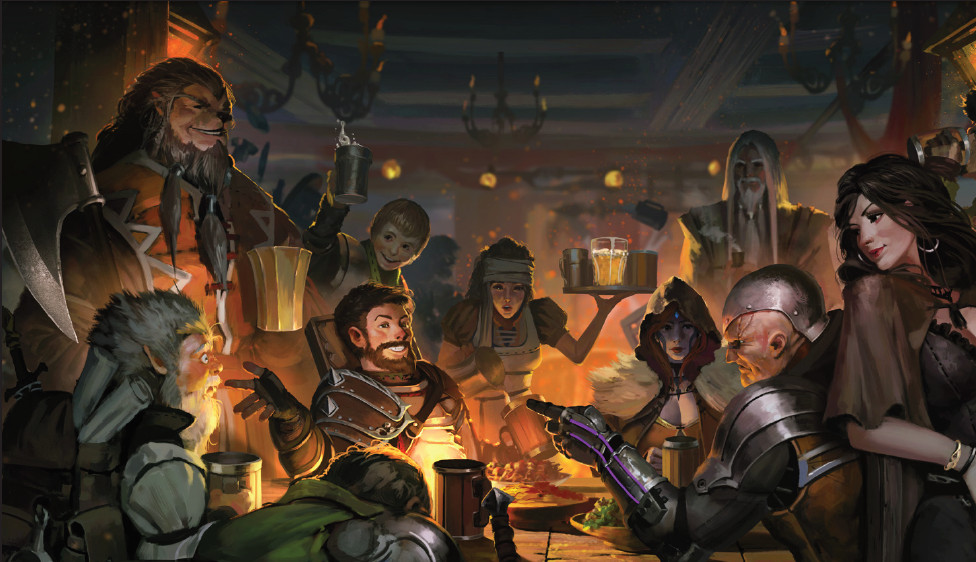 Equipment is highly abstracted, divided into Necessities (which are spent during rest and recovery periods) and Gear (which represent the items of adventuring tools and similar available to the characters). There is a player-facing narrative currency called Spark Points (which are earned for descriptive prose and spent on mechanical bonuses to rolls) as well as a GM-controlled narrative currency called Ruin (accumulated by the passage of time and various character actions and spent by the GM on complications or to power opponent powers). Distance and position in combat are abstracted as well for a more fluid and cinematic approach than offered by grid-based maps. There is a traditional hit point track, and loss of all hit points leads to a death save mechanic called Fading.

There are many other game mechanics, some of a more traditional bent and some more indie. There is a whole rules section for piloting a Titan Rig, which is a cooperative success-collecting exercise for the entire party. A session zero (pre-story collaborative character creation session) is explicitly recommended in the game. The “failing forward” technique is also explicit in the rules, as a failed combat roll results in the player choosing whether the attack misses or deals some damage while opening up the character to a counter-attack.

Finally, I’d like to note that this game is best enjoyed with plenty of pre-game discussion about tone and content, and (as with all games) I cannot recommend enough the use of safety tools in play. There is much in the setting that can easily lead to problematic content at your table, and it’s worth taking that under advisement before diving in with both feet. The Afflicted in particular can easily strike notes of ableism if not handled with care. In addition, there may be troubling cultural elements present in, not just the history, but the present day of the playable peoples, like slavery and ritual suicide. It is explicit that part of the game is the examination of moral decisions and thought, but the game offers some ideas that players may not be willing to take on in play, and there are no warnings in the text to let you know. Proceed with understanding and care for your fellow players.

Unity is available for purchase in print and PDF from the Zensara Studios online store [8]. Mechanically, this game is not only reminiscent of mid-to-late editions of Dungeons & Dragons [9], but some design elements (like Core Paths) also remind me strongly of 13th Age [10] (one of my personal favorites in the fantasy d20-based space). Thematically, Unity falls somewhere for me in the neighborhood between Shadow of the Demon Lord [11] and Numenera [12], a kind of mashup of fantasy horror and science fantasy.