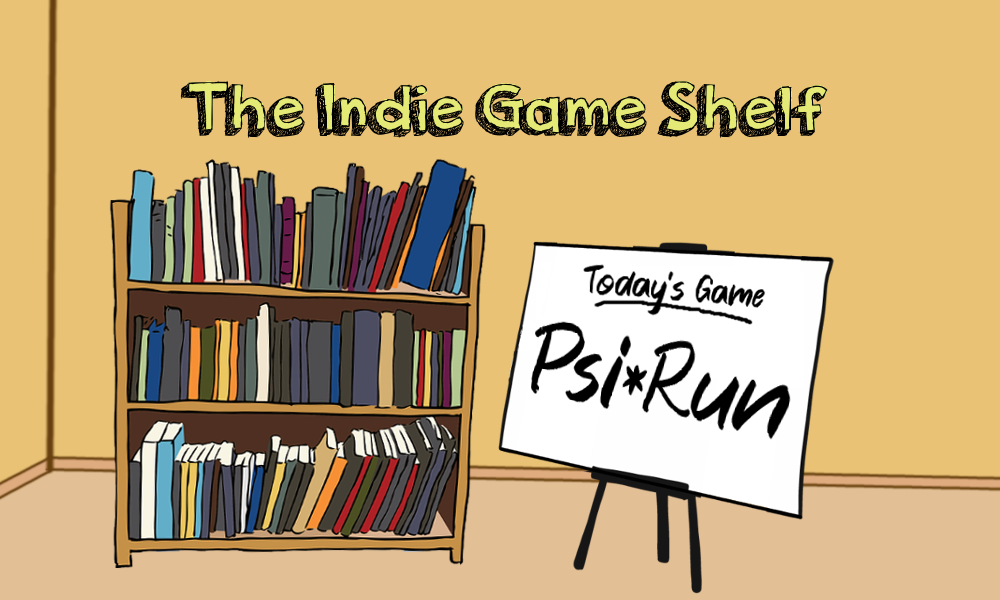 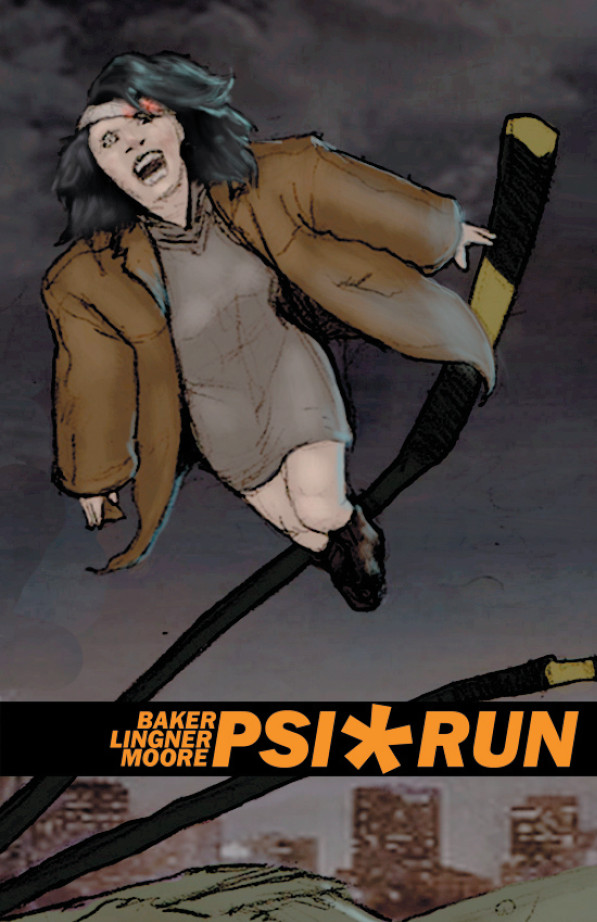 Psi*Run [1] from Night Sky Games [2] is a low-prep, GMed roleplaying story game designed for 4-6 players (including a Game Master) to explore the stories of amnesiac psychics fleeing relentless pursuers. The Night Sky Games edition is Meguey Baker’s 2011 remake of a 2007 ashcan by Chris Moore and Michael Lingner. The game uses a handful of six-sided dice, some playsheets available in the book or by download, a few tokens, and a stack of index cards. It is one of my all-time favorite games, not only overall, but also particularly for introducing people to story games.

Psi*Run is built to tell a particular kind of story with specific themes, and while the setting is in large part decided at the table, the fiction is best placed in a modern or near-future time frame. The desired narrative themes lean on a cat-and-mouse chase, and the game benefits from the fiction occurring in a time, place, and culture with mass communication and mass media but with technology advanced only to the point that psychic powers are extraordinary and dangerous.

While all Psi*Run stories are improvised, they also all start the same way: with a crash. The party of player characters (the Runners) are being transported somewhere in a vehicle, and the transportation has gone awry. They also each have psychic powers, and none of them remember who they are or anything about their past. All they know is that they are being chased and they have to run to avoid capture. From there, the rest of the story is up to the players and the dice.

The Runners move from place to place in an attempt to outpace the ever-following Chasers. As the Runners move, they build the map of the world they inhabit which, in a sense, consists only of the space between them and the Chasers. Along the way, they can take actions, use powers, and investigate the handful of clues they have about themselves to try to uncover their pasts. The game continues, the Runners run, and the Chasers chase until one player has answered all their character’s questions about themselves, at which point they have learned enough to stop running. This signals the end phase of the game, and one by one, all the characters find themselves no longer on the run, one way or another.

This game, like many low- and no-prep story games, includes a dedicated setup phase before starting the story proper, but it is also interesting for establishing questions instead of answers. To put it another way, due to the conceit of the Runners knowing very little about their past, the ideas gathered during setup and character creation are more for looking forward in the fiction than looking back. The character sheet (Runner Sheet) for the game is very simple; besides including some reminders about the base mechanics of the game, a player only records what the Runner looks like, what power the Runner has, and a list of questions the Runner wants to answer. Even knowing a character’s name is optional. 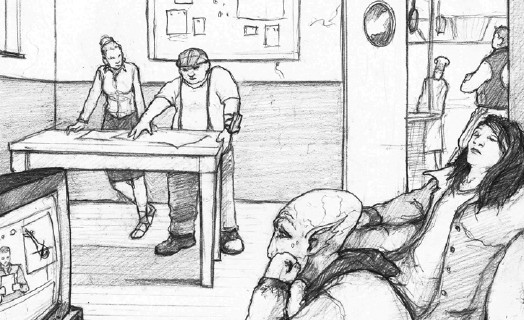 The Runner questions comprise the core of how the game mechanizes narrative progress. Each Runner will start with 4-6 questions about certain prescribed topics: their powers, their strengths and weaknesses, and their situations. These questions may collaterally establish facts in the narrative (“What does this key in my pocket unlock?”), but none of the answers are known at the beginning of the story. Over the course of play, Runners discover answers to these questions. Once one Runner has answered all of their questions, it signals the imminent approach of epilogues and the end of the game soon after.

Once the Runners are created by the players, a few details about the Chasers are decided on by the GM and recorded on the Chaser Sheet. These are just a few notes on the Look, Method, and Technology of the Chasers, and all of it is public knowledge so that the players know what they’re running from. In addition, though, the GM also makes a few private notes on a Chaser Card to focus and guide their descriptions of the Chasers over the course of the game.

There are no character-specific stats or attributes. Significant actions call for the roll of a pool of dice which is assembled by perusing a list of questions on the Runner Sheet. Each question which might be answered by the action being undertaken adds a die to the pool. The pool will always be 4-6 dice in size; some questions will always be asked by an action, while others are optional. (For example, all significant actions trigger the question “Do I achieve my goal?” However, only actions involving powers will ask the question “Do my psi powers cause trouble?”) The questions and their possible outcomes are listed on a playmat-style sheet called the Risk Sheet. Once the pool is rolled, the player assigns the result of each die to answer each question that was triggered, and each result indicates two things: (1) how successful or beneficial the answer and (2) who has narrative control of the result.

For example, the question “Does anyone get caught?” may be triggered by an action. If the die result is 1, the Risk Sheet says “Everyone gets caught. Other players have first say.” For results 2-3, “Somebody gets caught – it may or may not be you. GM has first say.” For 4-6, “Nobody gets caught. Player has first say.” Note that in each case, each range not only dictates a different narrative result but also indicates a different person taking narrative control of the outcome. Because every roll involves a die pool, every roll involves a player decision about how to assign outcomes. In a simplified example, a player might be left with a 1 and a 6 and have to decide which question gets a good outcome and which gets a bad one: “Do I achieve my goal?” or “Do my psi powers cause trouble?”

Eventually, everyone stops running, but not every ending will be a happy one.
Share36 [3]
Tweet9 [4]
Reddit1 [5]
Email [6]
The final key components of the gameplay are locations, as the story of the game focuses on the pursuit of the Runners by the Chasers from place to place. The scale of locations is variable and important only so far as they impact the fiction. If the Runners flee immediately to the next room, that could be a new location. If they escape to a different city days later, that could also just be a new location. Each new location is denoted by a separate index card, and as the game progresses, a path of index cards (the Trail) is built which shows the course of the Runners’ flight. The Runners’ locations are indicated on the trail by tokens, and likewise the Chasers are also represented by tokens, so the Runners always know just how far away they are (or how close they are!) to getting caught.

At the end of the game (when one Runner has all their questions answered), all Runners get the chance to end their story. They choose from a list of possible reasons they are no longer running which guides the tone of their epilogue. However, the list contains a variety of endings, some good (like “Home”) and some not as good (like “Trapped”), and a given ending can only be chosen once. Eventually, everyone stops running, but not every ending will be a happy one.

I’m including an extra section in this installment of The Indie Game Shelf, because this game is one of my absolute favorites, particularly as an introduction to story games. The characters not knowing anything about their past means that no character backstory is needed in order to play. The game itself is all about learning things about the characters and their world, and the mechanics are character-driven narrative prompts, so everything the characters learn about themselves are things the players wanted to learn. The action resolution mechanic is a straightforward directing of every action to impact both the immediate result and the overall game story in a significant way; every action answers questions that are important to the game. The decision-making the players must engage in when determining the results of their actions teach quickly that character “failure” is not the same thing as storytelling failure. If a player chooses that a character doesn’t achieve their immediate goal with a roll, it is often because the player chooses to succeed in some other way: to protect other Runners from the Chasers, for example, or to remember something about their past. Even if all results of a roll are low and a “success” isn’t possible, the results still cause the fiction to progress; it is an elegant mechanical implementation of the “fail forward” philosophy. In addition, the shifting responsibilities of narrative control over roll results mean that everyone at the table can get a chance to contribute to every character’s story. Lastly, the separation of character failure from story failure is also promoted by the ending of the game, in which not every character may get the ending they were hoping for, but all players get to construct some kind of ending for their character.

Also as a recurring theme in The Indie Game Shelf thus far is my love for collaborative map-building. Although map-building in this game is not of the same type as, say, Legacy [7] or Companions’ Tale [8] or The Quiet Year [9], I find it just as enjoyable and for different reasons. The collaborative map in Psi*Run (the Trail of index cards) is far more abstract, and even more temporary, than maps in other games, but it is built with narrative importance at the forefront and is more of a “logical” map than a geographical one. It is also built over the course of play instead of during setup, so each new location adds a dose of the thrill of discovery to every scene change.

I cannot recommend this game strongly enough to gamers of all levels of experience and all styles of play. No matter your personal approach to playing RPGs, I believe this game holds both enjoyment and learning opportunities for roleplayers of all kinds.

Psi*Run is available for purchase in print and PDF from Night Sky Games [1]. The game has a compelling theme and has inspired a variety of hacks and reskins. A couple popular (and free!) fan-made hacks based on existing worlds are Psi*Run: Days of Future Past [10] (based on the X-Men title of the same name) and Terminator: Runners [11] (based on the Terminator movie franchise). For those familiar with those properties, the parallels with Psi*Run are unmistakable. I also recommend a more recent entry to this family of games, No Crime But Living [12] by Silent Ferrets Games, a GMless game about outcast mages hunted by wizard fascists. Finally, there was an excellent discussion about this game on an episode [13] of The Farrier’s Bellows [14], a podcast which explores deep examinations of many indie RPGs. If you’re interested in indie RPG design history and haven’t already subscribed, I recommend checking the podcast out.