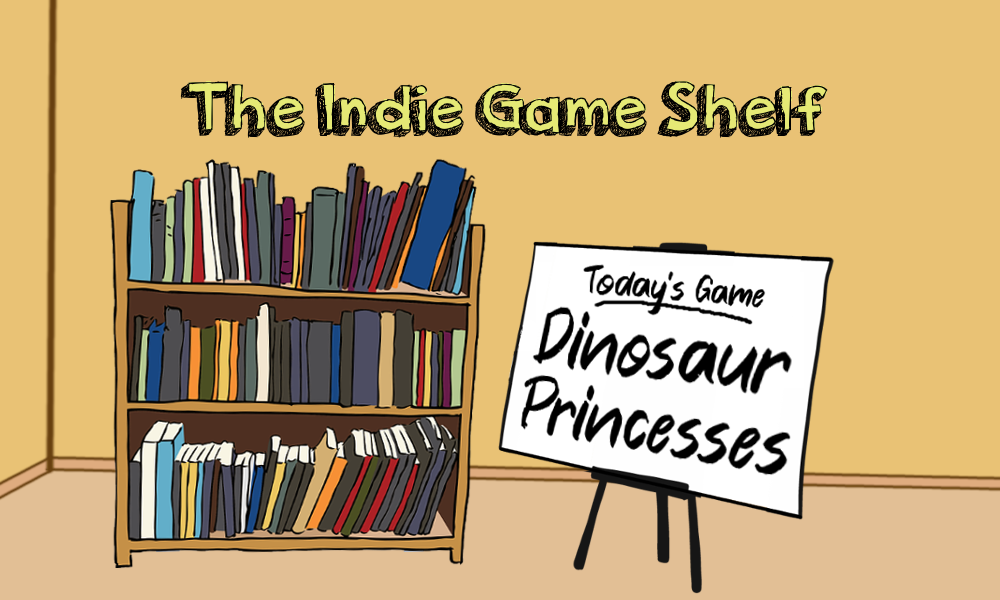 Dinosaur Princesses: A Story Game of Collaboration and Cooperation for All Ages 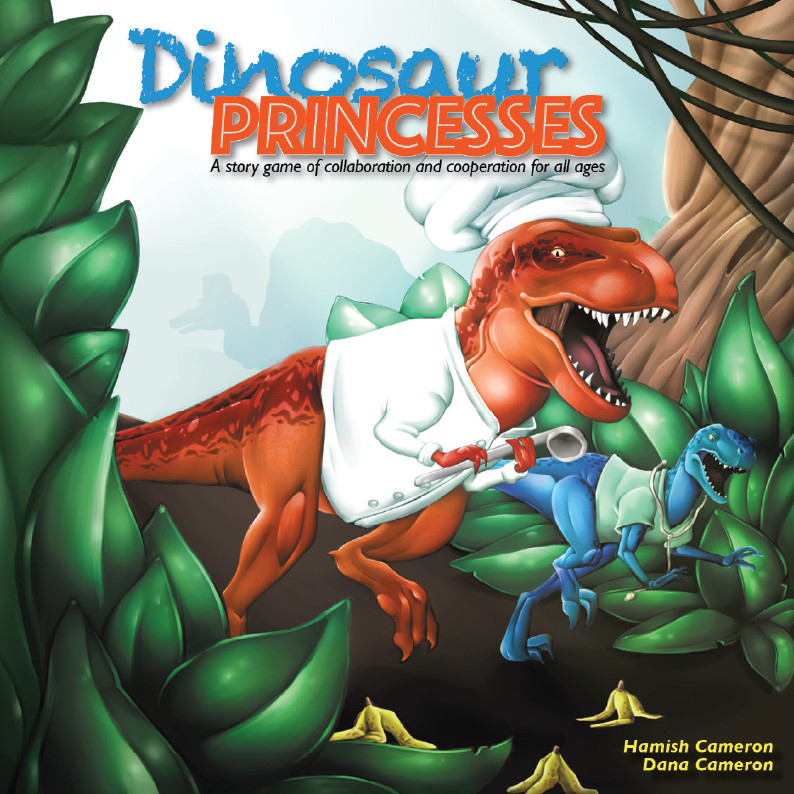 Dinosaur Princesses from Ardens Ludere, written by Hamish Cameron and Dana Cameron, is a GMed roleplaying story game designed for 3 to 5 players to tell the story of a group of friends working together to overcome a problem and help their community. The game is designed for all-ages, short form (1 to 2 hours), single-session play with a straightforward system to teach and learn and an easygoing approach to foster cooperative narrative play. Besides rolling dice and telling a story, the game also encourages drawing and coloring, with collaborative map-building as part of the game and character sheets that encourage artwork. Even the rule book itself serves as a delightful coloring book! Though coloring the book is not essential to the gameplay, it offers a wonderful opportunity for each book to be made one-of-a-kind. The game won the Silver ENnie in 2019 for Best Family Game.

There is no established setting in Dinosaur Princesses. Though the game focuses each session on a story with a specific framework, the details of both the narrative and the setting are collaboratively established as part of play. The tone of the game is, by default, a cartoony adventure featuring lovable pals, and the tale told is one of friendship, support, and cooperation. The characters are, as you might surmise from the title, both dinosaurs and princesses. Mostly. Maybe. Both the dinosaur and princess aspects are thematic to the game, but not actually essential to the story. “Dinosaur” as a character trait can be as specific as “Stegosaurus,” as general as “Monster,” or as different as “Ghost.” The game leaves a lot of space and encouragement for creativity.

The stories involve the characters encountering a specific problem facing them and their community, and the players design and execute a step-by-step plan to solve this problem. The scenes that make up the bulk of gameplay describe how the group accomplishes each step and deals with each obstacle that crops up along the way with a particular focus on how they work together to meet their objectives. The story ends when the group solves the problem and celebrates their success.

As a game designed for quick one-shot play, character creation in Dinosaur Princesses is simple and speedy. After coming up with names and pronouns, players choose a dinosaur type, a princess type, and two descriptive words to go with each type. Aside from adding artwork, that’s all it takes to make a character! The Dinosaur Type describes the character’s physicality, and while examples from the book do include a wide array of dinosaur species, as noted previously the type can actually be anything from non-dinosaur examples like “Cat” to non-living examples like “Train.” The Princess Type describes something like your character’s profession or nature, with Princess Type examples like “Dancer,” “Fairy,” or “Park Ranger.” Players have lots of latitude when coming up with types, but choices for the descriptive words are even more freeform. Two words must be chosen to describe the character’s strengths as a dinosaur and two for strengths as a princess, but those are the only guidelines. While example dinosaur words like “Big” and “Spiky” certainly speak to a character’s physical nature, others like “Optimistic” and “Stalwart” apply to personality. It really is just about your character’s dinosaur strengths. Example princess words focus less on physicality with things like “Inventive” and “Brave,” but even then examples like “Powerful” and “Quick” show the available range of possibilities. Once characters are created, they are each described in turn with a series of Opening Scenes, which serve to introduce a character, establish their relationships with other characters, and add to the shared world map, which is collaboratively drawn by all players. 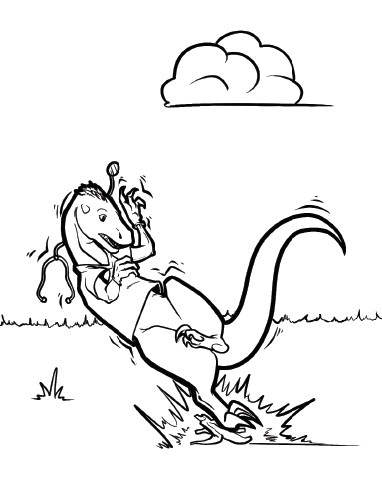 Dinosaur Princesses is overtly designed as a game built to tell a story, and the gameplay distills the story to be told into discrete narrative elements which guide the players. Once characters are introduced, the Paleontologist (the GM) reveals a problem facing the community that only the characters can solve. The problem is also drawn onto the shared world map, along with any obstacles which may be standing in the way of a solution. After the problem is introduced, the players come up with a plan to address the problem, with each player contributing a step in the plan (and drawing a representation on the map). In this way, the game provides a structure for the story, the players fill in the details, and the arc of the entire story is outlined before the story is told.

With a plan in place, the characters then begin their adventure. The players take turns acting as Scene Leader, framing scenes in which a specific goal is laid out, generally a step in the grand plan. The scene is played out, and the Paleontologist, armed with an Obstacle Pool of dice, introduces things that will get in the characters’ way. The players, generally starting with the Scene Leader and then moving on to include others, assemble a dice pool of their own using their characters’ dinosaur and princess words to describe how they are helping the group succeed. Even players who can’t come up with a way to help with the task at hand can still “cheer” the participating characters, an act which creates a bonus word usable by others in future scenes.

Once the steps have all been accomplished and the plan completed, the problem initially faced by the characters is solved! The game ends with an epilogue-like round of players describing their celebrations and explaining how the party’s success helped their community.

I want to take some time to highlight the care this game takes in making it easy and fun to run and play. The rules and mechanics open a lot of room for creative expression, but they also strongly support the game’s theme of cooperation. Task resolution is distilled to a single roll to which all party members contribute, as opposed to a more traditional structure involving multiple rolls by many different characters. The “cheer” mechanic encourages players to keep involved in the party’s greater interests, even when their characters aren’t directly aiding a roll. This game solidly does what it sets out to do thematically, and those themes are neatly reinforced by the mechanics. Plus, regular Indie Game Shelf readers don’t even need to be told of my particular love for shared map-building.

Dinosaur Princesses is…an outstanding introductory game for anyone new to running RPGs, playing in them, or both, and is particularly suitable as an introductory game for younger folks.
Aside from the ease of use by players portraying characters in the story, a good portion of the book is also dedicated to tips and advice for the Paleontologist, the game runner for Dinosaur Princesses. This section is highly approachable and encouraging, and further it highlights important points helpful for running any game, not just Dinosaur Princesses. Aside from purely mechanical concerns like managing the Obstacle Pool, the “Paleontologist’s Field Guide” touches on tone discussions, safety tools, failing forward, how to encourage play and engagement, and is generally just an excellent primer to GMing. In addition to all that, it also has a section written by a younger gamer on how to run great games for kids!

In addition to being a fun game in its own right, Dinosaur Princesses is also an outstanding introductory game for anyone new to running RPGs, playing in them, or both, and is particularly suitable as an introductory game for younger folks. Dinosaur Princesses stands out to me as exceptional in the arena of games designed with children in mind. Often with such games, I’m left with the impression that while a game may be designed for youngsters (and designed well!), the game book is still written for adults. While rules may be kept light and simple, there’s often still a lot of work to be done on the adult side in managing the game for kids. Dinosaur Princesses keeps it simple and easy from start to finish, and not only is the game fun, but the book is fun! (Did I mention it’s also a coloring book?!) The game text walks the reader through all aspects of the game, both playing and running, and is full of great advice for both. Many games are designed for adults to run for kids, but I especially like Dinosaur Princesses for being a game that teaches kids how to run games for anyone.

Dinosaur Princesses is available in print and PDF from Indie Press Revolution. It feels like there’s no shortage of games these days designed with children in mind, like Amazing Tales, the recently translated to English Ryuutama, and of course the juggernaut No Thank You, Evil! As mentioned above, though, while these are all great games for adults to learn and run for kids, Dinosaur Princesses has now become my go-to for teaching RPGs cold. In the realm of similar games not specifically designed or marketed to the younger set, I was reminded initially of Project Ninja Panda Taco. I think the two share a certain attitude of freewheeling, lightweight, and character-driven structured narrative. Ultralight games like Lasers & Feelings likewise make wonderful quick-play games, but the narrative guideposts in the mechanics of Dinosaur Princesses, along with the excellent gaming advice included in the text, make this a top-shelf recommendation from me.