Recently I was afforded the rare opportunity to slide into the center seat and be a guest GM – or “Narrator” in this case – for our regular Star Trek game. I say “rare” because in my 30 years of gaming, it’s something I’d never done before.

It started innocently enough, with Martin not having enough time available to prep a game I casually made mention that Star Trek game ideas for me are like those old AOL discs that showed up in the mail: unsolicited and far more than you could ever possibly use. Next thing I knew we were discussing my filling in – leaving my Delta commanding officer on the sideline – to run an adventure as a guest Narrator.

There was some concern on Martin’s part that my game might be “too good” and the group would be reticent to return to his tired and worn stories. Poppycock, of course, but a concern that I hadn’t, frankly, considered. This was a bit of an unusual situation in that I’ve been running Star Trek games for a good portion of those 30 years and have design and writing credits for several products within the last two iterations of the published RPG. This was Martin’s first Star Trek campaign.

The idea that I pitched was a below decks campaign – starting characters on board the same vessel, the U.S.S. Endurance – but with dramatically different duties and perspectives versus the “regular cast.” Essentially the season seven Star Trek: The Next Generation episode, “Lower Decks,” on a reoccurring basis. 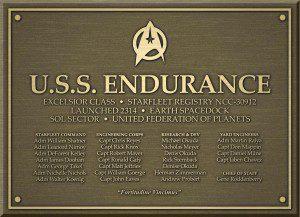 Part of the appeal was taking the life on board the U.S.S. Endurance and turning it on its side. A chance for the players (and Martin) to experience things from a slightly different point-of-view. Using the same ship allowed for continuity; the players already knew the major characters on board.

Making the new PCs ensign rank characters also changed the scope of the stories that I would be telling dramatically. While Martin’s campaign is, ostensibly, about the mounting tensions with the Romulan Empire, impending war, and pesky Iconian conduits, mine would be about more mundane – but still important – events that would realistically be beneath the command crew’s purview.

I had their other characters (sans Martin, of course) make guest appearances, including my own captain. I figured everyone would get a thrill in seeing glimpses of how the “little people” perceive their regular command characters.

For Martin I made sure to use his signature NPCs, from the always-complaining chief medical officer, to the droll Vulcan bartender from the ship’s bar, “Shakleton’s.” All characters he created and has had to play. So each of them is, in a way, a friendly nod to his hard work.

The ensigns were the first step; I also required the glue to keep them together. In this case I created “Response Teams” on board the vessel. Emergency response teams that muster in the case of an emergency (alert status) and are assigned to a deck. I stuck them on the largest deck on a Excelsior-class starship, deck 7 of the primary hull. Deck 7 has lots of neat stuff: the primary and secondary computer core access, transporter room, sickbay, battle bridge, “Shakleton’s,” turbolift control, science labs, and portions of the impulse reactor core. Lots of stuff to break and involve the ensigns in!

In fact, deck 7 is so large that two teams man it: RT-71 (port team) and RT-72 (starboard team). The other team is comprised of up-and-coming ensigns hellbent on being the next Captain Kirk, so instantly our players have a reoccurring foil for their adventures and of roughly the same power level.

So as to disarm the concern that my ensigns adventures would somehow be “better” or overshadow Martin’s campaign, the first two were deliberately “echos” of our primary character’s adventures, simply from a different point-of-view. That may not sound interesting, but while the overall mission and timeline of events were the same, much more different experiences were happening “below decks.” Discovering a Romulan saboteur, disarming a bomb, helping administer triage to wounded Starfleet personnel, and more.

Instead of competing with Martin’s adventures, I was complementing them.

Finally, I snuck in a small, overarching plot of my own to provide continuity through adventures and using the concept of the “temporal cold war” first used in Enterprise. Should I screw anything up I’ve got time modification (hey, it’s Star Trek!) sitting in my corner, ready to go. It also differentiates my ensign game (temporal cold war bits) from Martin’s (Romulan incursion).

Martin and I never discussed any rules and he’s given me access to everything I need, including our game wiki to update and keep current. However, I’ve mentally made a list of a few of my ground rules for the campaign:

So that’s all I have for now. The experiment is a few months old and everything seems to be going strong. As I said, it’s my first foray into guest GMing, so I’m not quite sure what to expect! One downside is that this does drain enough of my time that prep on my other game is falling by the wayside. I’m unsure if anyone cares as we’re having a blast!

Running a guest campaign of your own? Share some of your tips below!

9 Responses to The Guest GM Experience