This idea hit me like a bolt from the blue, and I knew I had to write an article about it. It’s weird, but the more I thought about it, the more I liked it.

Welcome to the Decamer Campaign concept, which I hope features just the right amount of crazy. 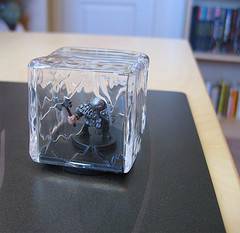 I’ll freely admit that I love gelatinous cubes. I have a gelatinous cube mini on my desk, and the cube contains minis for my first D&D character and my longest-running character.

But there are folks out there — maybe even you! — who (brace yourself) think gelatinous cubes are really stupid. And they’re wrong, wrong, wrong, and probably kill puppies in their spare time, too I can kind of see where they’re coming from.

So: Step one is to choose the 10 monsters in D&D you think are the stupidest, from any edition. Seriously.

Don’t think about it for more than about five minutes, and don’t cheat and try to pick 10 that are secretly kind of cool. You have to think these monsters are dumb, dumb, dumb.

Here’s my list, in no particular order (and the real problem is picking just 10!): 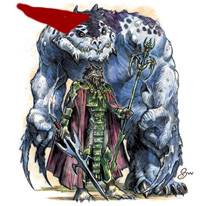 You know what’s not scary? Frogs. You know what doesn’t make them scarier? Turning them into giant, bipedal frog monsters.

It doesn’t help that it’s hard not to read their name as “salad,” or that they seem to be one of D&D’s classic filler monsters, along with elementals, golems, and giants. 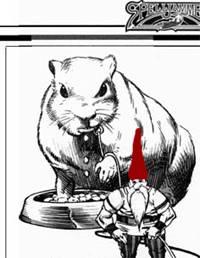 I like Spelljammer. I even like hamsters. But what clearer sign could there be that your party has hit the skids than having to fight a giant hamster in space?

Recently resurrected adventurer: “What happened? Where am I?”

Fellow party member: “We brought you back from the dead. You…uh…you were killed by [giggles]…a hamster.

Recently resurrected adventurer: “The fuck I was! I have like a billion hit points!”

Fellow party member: “In all fairness…[giggles] it was a LARGE hamster.” 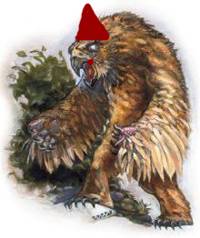 Why this is a “classic” monster baffles me — unless it’s just the tip of the iceberg. Why stop at owl + bear?

Scout: “There’s an owlbear up ahead, sir. We should detour around it.”

Commander: “Is it like a bear that can fly?”

Commander: “Ah, so it’s more like an owl with a bear’s ferocious bite?

Scout: “Nossir. It’s more like a bear with a beak, actually.”

Commander: “Somehow I think we’ll be able to survive, soldier.” 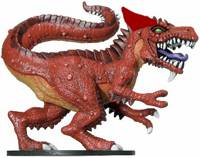 Wait, that can’t be right. It should be “Nothing says fantasy less than dinosaurs except maybe robots.”

Granted, in Eberron halflings ride dinosaurs — briefly making halflings cool, albeit still not really a fantasy trope for the ages.

GM: “Yep. Its jaws are glistening with saliva as it turns its –” 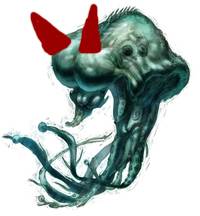 It’s full of toxic gas, and explodes when you kill it.

It flies at 90′ per round with perfect maneuverability.

GM: “It flies straight up in the air, then flies back down at Mach 1 and slaps its gigantic, gas-filled balls across your forehead. Teabagged, motherfucker!” 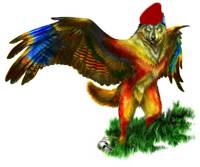 Why do the paragons of good-aligned creatures in D&D always look like a truck full of kittens crashing into a rainbow factory?

The senmurv is a perfect example: they’re giant, upright huskies with feathery rainbow wings in place of their front paws. You can also ride them.

Good deity: “I need a fearsome champion of all that is good…how about I mash together a sled dog, an eagle, and a rainbow. Let me pull some Scrabble tiles to name it…S-E-N-M-U-R-V — that’ll work. Damn, I’m good!”

Evil deity: “I need a fearsome champion of all that is evil…how about a winged demon the size of a house that carries a massive sword and a whip made from living fire — that sounds awesome. I’ll call it a pit fiend, so you know it means business. Damn, I’m good!” 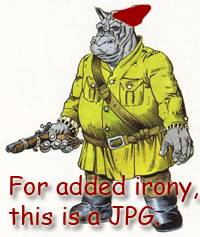 And to make things worse, they were one of Spelljammer’s iconic races.

Player: “OK, Spelljammer is actually pretty cool so far. I’m sorry I whined about it before — I just didn’t think D&D in space was going to make any sense.”

GM: “Awesome! I’m glad you like it. Now roll for initiative — you’re being boarded by a ship full of space hippos in bowler hats. They have muskets.” 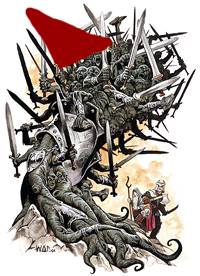 The Epic Level Handbook is one of the worst D&D books ever written, so it’s no surprise it spawned at least one thundercrap of a monster.

It looks like a tree with tentacles at its base, plate armor, 50 heads, and 100 arms — and each arm is holding a greatsword.

Yes, it gets 100 attacks per round…in 3rd Edition, a game where combat generally takes about 30 seconds of in-game time and six fucking hours or real-world time.

Won’t that be fun to fight!

Player: “Finally! We made it to epic level! I hope we fight something awesome tonight!”

GM: “Dude, you so will. Check this thing out: [shows picture of hecatoncheires]. I’m going to spread this battle across our next 12 sessions. If you lose initiative, you’ll probably get to attack it sometime around session eight.

Entire concept: Worst thing to be killed by in D&D, ever.

GM: “You see a phasm up ahead. It jiggles at you.” 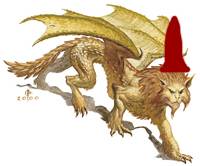 In and of themselves, dragonnes aren’t lame. But in a world where dragons exist, they’re like the ultimate bait-and-switch.

What’s one of the coolest, most epic foes you can face in D&D — at any level? Dragons, motherfucker.

What’s the cheap knockoff of a dragon, the “Goucci” to a dragon’s Gucci? That’s right: the dragonne.

Player: “Dude, a dragon! We’re going to get a chance to fight a dragon?! That’s totally awesome! I’ve been playing D&D for 10 years, and I can count the number of dragons I’ve fought on one hand. This is going to rock.

Player: “What the fuck is that?”

Step 2: These 10 Monsters are the Focus of Your Entire Campaign

Step two is really just a pause while you adjust to this idea. Yes, the Decamer Campaign is based on these monsters — no excuses.

That’s the challenge: What can you do with this set of tools? Think of it like a haiku, but all you have to work with are the stupidest words in the English language.

Step three starts with a fork: you can run the Decamer Campaign as a joke game, or you can take it seriously and try to run a “normal” campaign wrapped around this concept.

I’ve never played a long-running humorous game, but I’ve played and run my share of Og: The Caveman RPG, Bunnies and Burrows, and Paranoia — joke games are a lot of fun.

I honestly don’t think much advice is needed on doing Decamer this way — just make it funny, and perhaps don’t try for an epic, 10-year-long campaign.

The other side — trying to turn these 10 turds into a coherent, enjoyable game, sounds trickier to me.

And it really depends on what 10 monsters you picked. I pulled two themes, a nemesis organization, a shift in D&D lore, a “pinnacle foe,” and a setting out of my list:

So to sum that up, my Decamer Campaign would be set in a fantasy-ified ancient jungle, feature an organization of mad wizards as the PCs’ nemesis (and their creations as the party’s central foes), include legends around dragonnes — replacing the role of the dragon in traditional D&D settings — and would build up to a truly epic fight with a hecatoncheires.

I’d actually run that as a GM, and I’d actually play it as a player — it doesn’t sound half bad. With more than 10 minutes of thought to tie it together, and a couple hours of brainstorming, note-taking, and fruitful streams of consciousness, I think I could create a fun Decamer Campaign using this list of turds.

How about you? What would your Decamer list be? And how would you turn it into a Decamer Campaign?

22 Responses to The Decamer Campaign: Start with D&D’s 10 Stupidest Monsters…