The Cover and an Excerpt from the Foreword of Never Unprepared, the Stew’s Next Book

On June 4th, we’ll be opening preorders for our newest book: Phil Vecchione’s Never Unprepared: The Complete Game Master’s Guide to Session Prep, published by Engine Publishing. You can read more about the book itself in our first announcement — today I want to share the cover and a sample from the foreword by Sean Patrick Fannon.

Our cover artist, Matt Morrow, supported by our art director, John Arcadian, and our graphic designer, Darren Hardy, did an amazing job on this puppy: 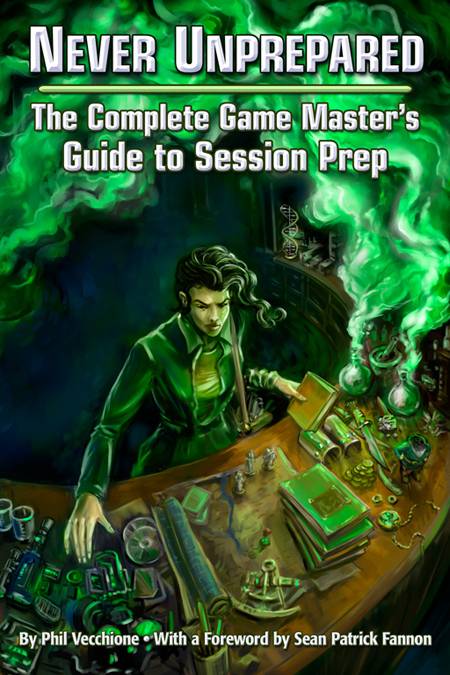 What I love about this cover is that the central figure looks like an interesting character to play, or to meet in the game. Whatever she’s preparing for, it looks dangerous — and fun.

She’s also more than just a pair of big boobs, which is important. I could talk all day about gender and racial inclusivity in our books, especially this one, but suffice to say that it’s an issue that bugs the shit out of me and this team has done an awesome job of ensuring that Never Unprepared’s artwork bucks the trend.

You’ll also find this same theme — preparation in all its forms — in the interior artwork by Matt Morrow and Christopher Reach. I’ll share some of those pieces later this month.

You may know Sean Patrick Fannon as the creator of Shaintar, the author of The Fantasy Roleplaying Gamer’s Bible, as the man behind OneBookShelf (best known for DriveThruRPG and RPGNow), his love of Savage Worlds, or his sprawling convention games. Sean is awesome, and Phil and I were ecstatic when he signed on to write the foreword for Never Unprepared.

Here’s an excerpt from his foreword — one that does double duty as a great summary of what the book is about, and what makes it unique, summed up as only Sean can:

Phil, on the other hand, has taken his expertise as a project manager and his genetic predisposition to nigh-obsessive preparedness and applied these qualities to an entirely systemic and effective treatise on the matter. He’s broken down the whole of the concept, applied a step-by-step presentation of all of the factors you need to consider, and presented it all in a clear, concise, easily grasped way.

Most importantly, he’s demystified the whole concept of “game prep.” It’s no longer the boogie-man waiting at your desk a couple of hours before game time, ready to stress you out beyond measure before people start showing up for your game. It’s also no longer that arduous, tedious task you have to force yourself to close the latest MMORPG or YouTube video to drudge through during the week. It’s a reasonable, manageable task that will actually be fun to perform, and it will take a lot of stress off of you by the time that first player arrives.

The best part of this book is that Phil doesn’t just lay out a list of steps that every GM must follow to the letter. Honestly, that would be fairly useless as well as pretentious. A wiser man, Phil, in that he instead guides you in evaluating your needs as a GM, based on your style of play. From there, he helps you figure out the steps that make the most sense for you.

Without beating you over the head with them, we’ll be doing a couple more previews of Never Unprepared this month. Stay tuned!

9 Responses to The Cover and an Excerpt from the Foreword of Never Unprepared, the Stew’s Next Book