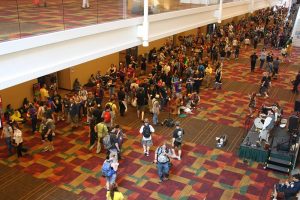 Now that it’s a new year, it’s time to start thinking about the upcoming convention season. Okay, first off let’s just agree to ignore the fact that my ‘con season’ covers most of the year, going from the end of January (Running GAGG, an awesome college con in Geneseo, NY) to mid-October (with Con on the Cob, a fantastically warped collection of awesomeness in Ohio). Whether they’re happening in a couple of weeks or months away, I’m already planning which ones I’m attending, who I’m going with, where I’m staying, and most importantly, what I’m going to be running.

Generally, a good GM is a good GM no matter what game they’re running, but there are some crucial differences between running a good campaign and running a good con game that can trip some GMs up. Con games are the ultimate form of one-shot and you’re often running for strangers that may have different expectations than your regular players. Making sure you run a good con game requires a slight shift of focus.

Here are some of my suggestions on how to make sure you run the best con game possible.

When you plan for an on-going campaign, anything the players bypass or miss can be reused later on in the campaign. This won’t work for con games. Whatever you’re going to present to the players for that time slot needs to have a solid beginning, middle and end. If you over plan and have too much for the players to get through, they won’t finish in the allotted time and the players will likely leave the table feeling less than satisfied with the game they just played.

You want to make sure you have enough planned, but have flexibility to account for both the efficient group and for the group that likes to take their time. Try and leave room in the game for the players to simply get into character and roleplay with one another or the NPC denizens of whatever world you’ve put them in. They’ll probably want to get into the plot eventually, but when they’re enjoying themselves interacting with the world, there’s no reason to rush them onto the plot train.

I’ve run one particular Doctor Who scenario multiple times at conventions. Sometimes I have a group of players who are completely content to settle into the wacky characters and just interact with one another, only secondarily going after the mystery. Other times, I’ve had players with little interest in roleplaying focus only on solving the mystery in front of them.

So, you shouldn’t over plan, but you should absolutely be prepared. Whatever you’re going to need to run the game, from stat blocks to character sheets, should be ready to go from the moment your players sit down at the table. Always remember that the players are taking a chance on investing several hours of their precious time with you in the hopes that they get a good gaming experience. The least you can do is make sure you are prepared and ready to go.

It’s of course crucial to have your notes and any other GM materials you need, but it’s also equally important to have the players’ character sheets and info ready to go as well. I’ve talked about this before, but always remember that the PCs are the player’s gateway into the game. Handing them a half-filled out, scribbled piece of paper with soda stains on it sends the message that you don’t really care about their experience with the game.

Even if you’ve run the scenario before, treat it as if it’s the first time. It’s always a good idea to play test scenarios before debuting them at conventions, but it’s also extremely important to not hang too many preconceived ideas of what the players are going to do in any given circumstance. Each combination of players is going to bring a different mix of ideas and actions to the game and you never know what they’re going to do. Assuming they’re going to do something because another player did that thing in a previous run through can make you as the GM stumble.

A Supernatural scenario I’ve run at conventions was very indicative of this. While all the sessions I ran had the werewolf hunting truck driver be a sweet, good old boy to the children that lived in the house they were trying to investigate, the psychic ghost-hunter was played differently every time. One player focused on his ability to talk with spirits and actually tried to ‘host’ the big bad spirit. Another player decided that ‘eccentric’ meant bug nuts crazy and used a dead dog’s head as a puppet. While you might have an inkling of what you’re going to get, you don’t want to be too tied to any one interpretation of the scenario or the characters.

As stated earlier, you only have a set amount of time allotted for the game. It’s absolutely crucial that you keep an eye on the time and pace your game accordingly. Your players probably have something else plannedÂ after your game is done, so you can’t assume going over on time is going to be okay. Worse comes to worse, set yourself an alarm to warn you when you’ve got an hour left so you can start getting the gameÂ wrapped up.

Speaking of wrapping up, try and give your players a good ending. Maybe it’s not the finale you initially planned because they got caught up in some other side point of the story, but it should still be something that makes them feel like the game was worth their time. Whether it’s a big battle or a dramatic showdown with the main antagonist, let them feel like they actually finished the game’s story in a satisfying way.

I’m on the schedule to run two games at Running GAGG in three weeks, so this is all on my mind as I work on getting those two games ready. The most important piece of advice I can give, regardless of whether you’re going to all the cons or just one, is to have FUN. See ya there!

2 Responses to The Con Game