The Boardgame Approach to GMing for Newbies 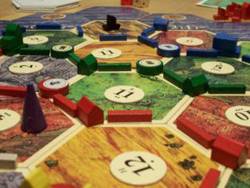 If you GM enough games, you’re going to have new players — really new, as in “never played an RPG before” — in your group at some point. Bringing new gamers into the hobby is a good thing, but it can definitely be a challenge.

For me, the hook is to approach it just like playing a new boardgame.

When you sit down to play a new boardgame with your friends, chances are someone at the table will have zero experience with the game.

Assuming you’re introducing the boardgame to your group, it’s likely that you’ll have some experience with it yourself — and that’s the assumption I’m making here. (Being a first-time GM is a whole other ball of wax.)

• Explain the rules. Boardgames are (generally) simpler than RPGs, so with an RPG you don’t want to explain all of the rules — that’s a great way to frighten off first-timers. Instead, explain the basic concepts, and give them an idea of how the overall game works.

• Play a sample round. The best way to teach is by example, so you deal out the cards, set up the pawns (or whatever) and run through a couple of turns. This acts as a refresher for anyone who has played it before, and an intro for those who haven’t.

• Start simple. For someone who’s never played an RPG before, there’s a lot going on, and it’s easy to forget that for them, it’s all new. So you keep it simple — run a pretty basic scenario, not the Meatgrinding Dungeon of Doom™ that you’ve been itching to try out. Playing an RPG for the first time can induce option paralysis: “Holy shit, I can do anything? Cool!” becomes, “So…what do I do?,” and the goal is to avoid that.

• Showcase the highlights. While you’re running your simple scenario, another goal to keep in mind is that you want to new player to see what the game’s all about — and that means picking a few things to foreground. If tactical combat is important, make sure to include a combat; if it’s all about immersion in an alternate world, layer on the descriptions.

• Have more experienced players help out. You’ve got plenty to do as the GM, so enlist someone (or several folks) to help show newer players the ropes. Whenever it’s the new player’s turn, the person next to them can make suggestions, run them through rolling their dice and so forth. This also creates a welcoming atmosphere, which goes a long way towards making new players want to come back.

• Be forgiving. When my group gets together to play a new boardgame, we take it easy for the first game or two — if you screw up, you can take back your move; if you forgot a rule, we’ll remind you of it; if you overlooked a great option, someone will point it out. This works just as well for first-time gamers.

• Remember the big picture. When you buy a new boardgame, you don’t want everyone who’s never played it before to hate it — if that happens, you just wasted $40. The same is true with RPGs: You want the first-time player to have so much fun in their first couple of sessions that they want to keep playing, and get motivated to learn more about the game.

This post grew out of a suggestion Ian Toltz made in a comment on Save My Game: Older Gamers: writing about mixed groups. It seemed like first-timers were at the heart of what Ian was asking about, though (players with some experience already “get it,” more or less, and bringing them up to speed on the specifics isn’t too tough), so that’s what I decided to write about. Thanks for the suggestion, Ian!

I hope you found it useful — and if I missed anything, or if you’re not sold on the boardgame analogy, I’d love to hear about it in the comments!

12 Responses to The Boardgame Approach to GMing for Newbies