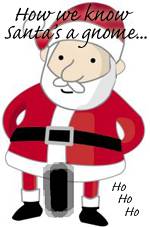 Before we went on our Christmas break (12/24 through 1/4, returning to normal posting 1/5), I asked all of the gnomes to choose their favorite three articles they’d written since our launch in May 2008. These guys have written a massive amount of GMing material — 260+ articles! — in the past seven months, and I thought this would be a good way to highlight some of the best articles you might never have seen.

From now through the end of our break, we’ll be running five posts like this one, each featuring two gnomes’ favorites.

Merry Christmas, and a Happy New Year from us gnomes!

1. “When a session gets dropped was great due to the enthusiastic and empathetic commenting. I got pointed at a lot of good ideas, and benefited from a lot of solid advice. Plus, it was a fun discussion!”

2. “Stat generation was a good discussion about a simple idea– do you mitigate random die rolls to keep everyone “equal” and a discussion of other character creation house rules. Interestingly, the commenters anticipated some of the problems that have developed– particularly in relation to judging their opponent’s relative competence.”

3. “In Without which not, I was able to identify a problem that I was having and clearly explain it. In addition to getting lots of good advice, several other people noticed they’d been having the same issue in their own games.”

Want to read all of Scott’s articles? Make with the clicky.

1. Where Does The GM’s Fun Come From?: “Sometimes we forget why we decided to be GMs, and this article brought me back to why I wanted to be behind the screen in the first place.”

2. Screw You and Your Facts!: “Having participated in many fights, been involved in various car wrecks, caught on the wrong side of the law more than once, and a plethora of other bad situations (due mostly to my own stupidity) that could be the basis for your typical RPG session the last thing that I want is a game grounded in reality. I game to escape reality for a little while, not to re-enact it.”

3. 5 Mistakes of the New GM: “My first article for Gnome Stew, and quite possibly my best, this article was written from personal experience on all five counts.”

Want to read all of Patrick’s articles? Make with the clicky.