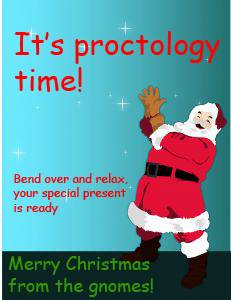 We’re on our annual Christmas break (12/27-12/31, returning 1/3/11), a week of non-stop drinking and putting our stock of powdered-dwarf-penis aphrodisiacs to good use family time and anime hairdressing holiday merriment, but we never like to let the stew stop bubbling entirely.

As in past years, we’ll be featuring six articles from the 2010 archives every day this week, with each gnome picking three favorites that they wrote. If you’re new to the Stew, or if you don’t pop in every day, this is a great way to catch up on the past year’s highlights.

Merry Christmas and happy Kick a Kobold in the Junk Day New Year from all of us at Gnome Stew!

1. Do You Want Criticism or Affirmation?: This article reflects an issue I had in past campaigns when I asked for honest feedback. In truth, I’d always been looking for affirmation that my time and effort in running games wasn’t wasted. Because of this, I tended to take even the most well-intentioned criticisms in the worst possible light and overcompensated to fix the “problems.”

2. Jump Starting a One-Shot with the Familiar: Judging by the lack of comments this wasn’t a popular article, but I really had a lot of fun with the campaign that inspired this article. I’ll certainly keep it in mind when running one-shots in the future.

3. The Pitfalls of Episodic Gameplay: This article piggy-backs one of Martin’s but stands on its own. I used to think that short, episodic adventures were easier to plan than long campaigns but, as I point out in the article, that’s often not the case. If you don’t see some of these pitfalls coming they can really wreak havoc on your game.

Martin’s note: Matt’s a dirty cheater and managed to shoehorn five articles into his three picks.

1. Seven Ways to Spice Up Your Treasure (and Seven More Ways to Spice Up Your Treasure): I love treasure. I love treasure almost as I love monsters! Treasure has the capacity to be both the most exciting and the most boring part of RPGs, so these articles (and the comments readers left on them) are a collection of ways to help your treasure be the former, not the latter.

2. A Beginner’s Primer on Probability (and Part 2): Probability is one of the most important aspects of the underlying mechanics of RPGs, and something I’ve been trying to get a full grasp on for decades. Taking a course on probability as part of my Masters program helped me understand the final pieces that had been confounding me, and I felt the need to share with everyone who may have been in the same boat as I had been for so long.

3. Whatever happened to the seventh son?: I loved fairy tales as a child, and still love their themes and elements, so an article on how to more closely model fairy tales with your RPGs was an article I had to include. Some of these techniques I used to great effect with my brief Shallow Cove campaign (see GMing concept garage sale. Everything STILL Must Go).