I recently picked up The Art of Ian Miller, a gorgeous book jam-packed with illustrations by one of my favorite fantasy artists. 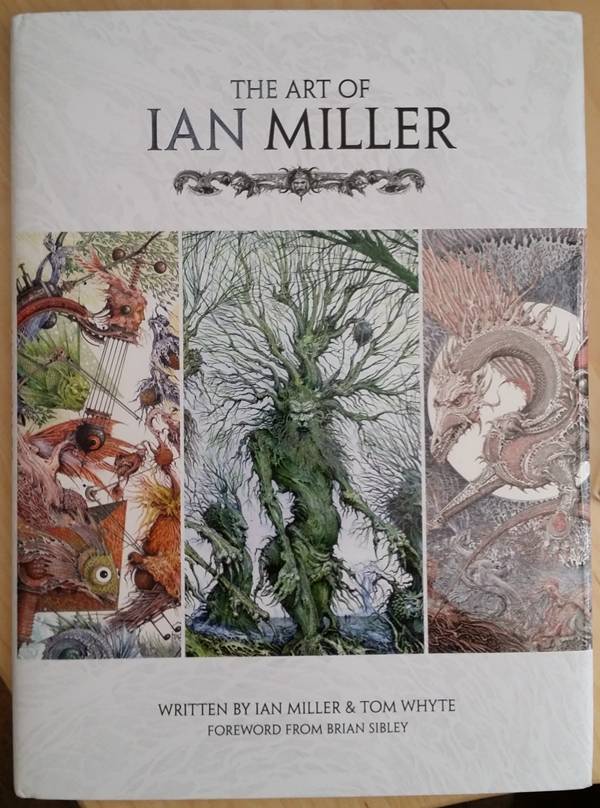 I picked it up not only because I love Ian’s artwork and I’ll enjoy having the book in my collection, but because it gave me an idea: The “art book campaign,” a campaign built around and inspired by the contents of one or more art books.

Here’s how it works, broken down into steps with my own examples for each step.

Type an artist’s name into Amazon’s search box, browse the art section at your local Barnes and Noble, or otherwise choose a book however you like.

I went with a simple approach: I love Ian Miller’s artwork, and whenever I see one of his pieces it inspires all sorts of weird gaming ideas. I also liked that this book wasn’t limited to a specific universe (Mass Effect, Star Wars) or genre, although it’s mostly fantasy.

Flip through the whole book, taking as little or as much time as you like, and jot down the first thing that springs to mind about any picture that strikes your fancy.

Don’t be constrained by trying to fit those ideas together — just let them flow. And don’t worry if you write down too many: It’s easier to connect and cut than add ideas later.

I flipped through The Art of Ian Miller once, set the book aside, and then flipped through parts of it again a week or so later. Below are the illustrations I chose, and the ideas I came up with based on them. 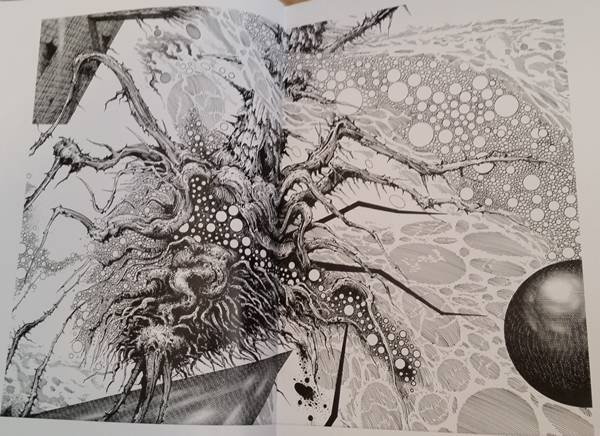 This guy is clearly the BBEG in my campaign. 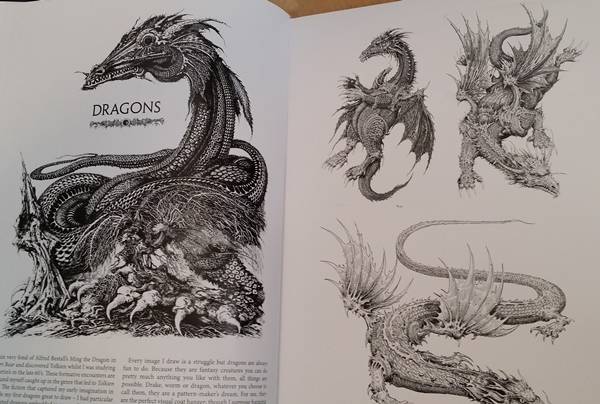 There are dragons in this campaign. 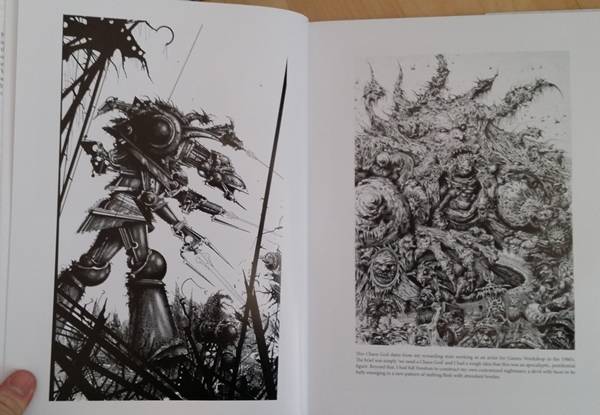 There are titanic, mechanical war machines and slobbering, house-sized chaos beasts in this campaign. 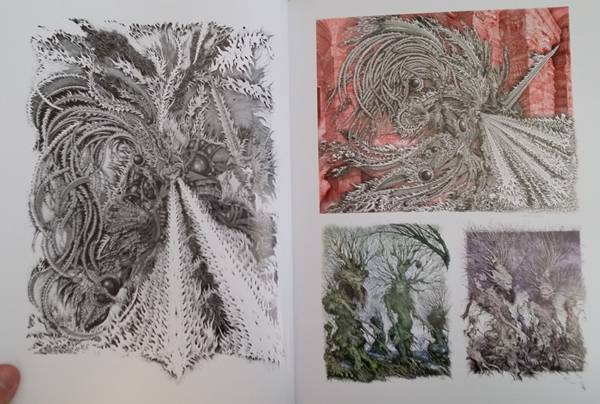 These dudes are fearsome champions of good. 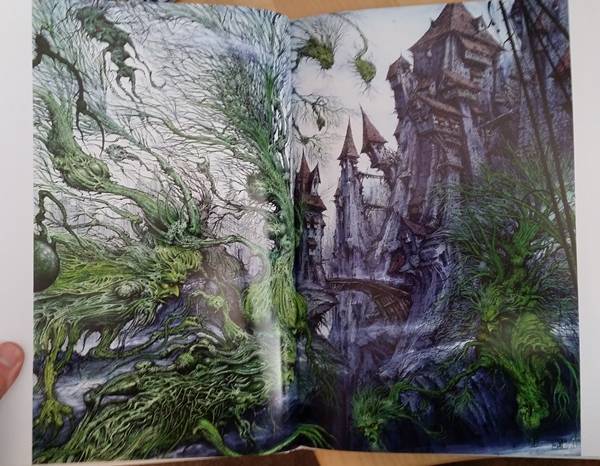 This place is important somehow. 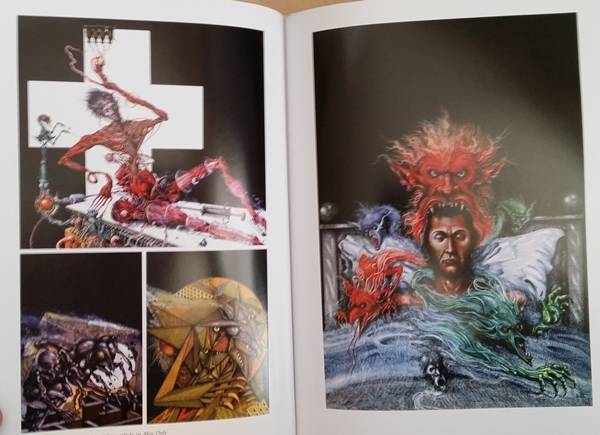 Dream-monsters are in the campaign.

3. Winnow down your ideas

Go through your list and pick your favorite elements. Move them to a new list, rewriting them if it feels right to tweak them a bit. If you like them all, keep them all.

Ignore the ideas you left behind. (Or keep them for another time, if you like.)

I liked my rough, big-picture list, so I kept them all and added tweaks:

Optional: 3-A. Flip through it again

Not loving what you came up with on the first pass? Take a second pass. No third pass, though — trust your instincts. 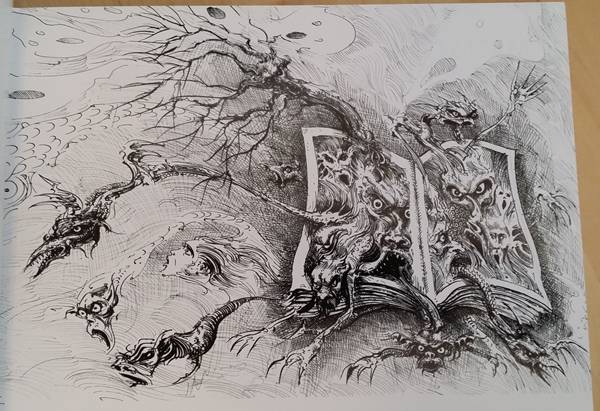 There’s a book that spawns monsters. 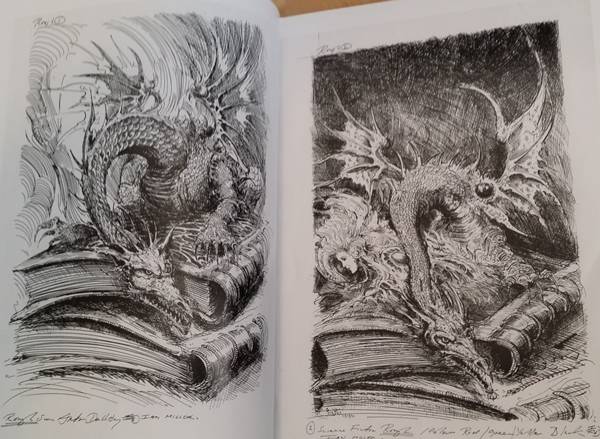 Dragons come out of books. 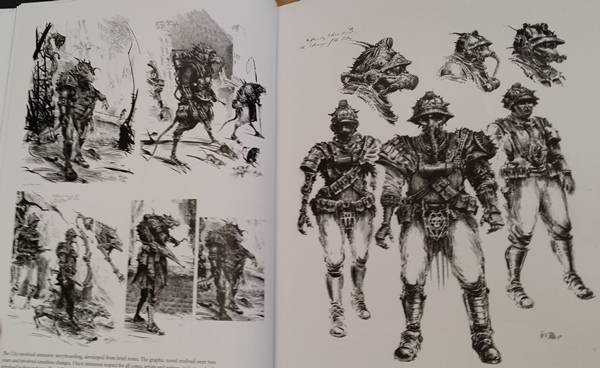 There are rat-men and poison gas is used in warfare. 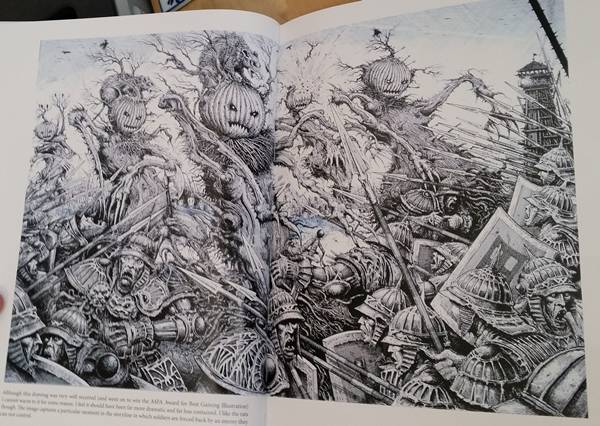 Nightmares can be made flesh. 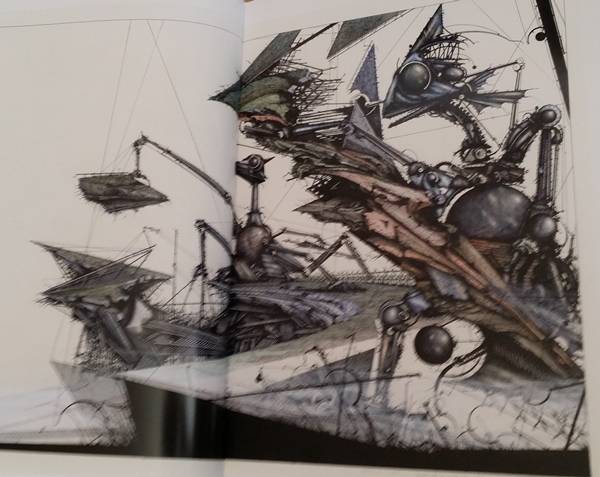 This sentient city is trying to take over the world.

4. Assemble those ideas into a campaign framework

I did this as a solo exercise, but you could just as easily do it in collaboration with your group.

Combining that list with my first list, tweaking things a bit, and doing a few minutes of noodling, here’s a first draft campaign framework for my Ian Miller art book campaign (written in about 10 minutes):

Charnuboleth, the Hell-Maelstrom, seeks to reduce the universe to chaos. On this world, it planted the seeds of the Living Abattoirs, house-sized mountains of flesh capable of crushing entire cities.

Malferak the Constructor, the deity opposed to Charnuboleth in this cosmos, in turn planted the seed of Mechos, a sentient city. As Mechos grew, it tried to combat the Living Abattoirs in different ways. First it built the War-Titans, enormous war machines powered by clockwork brains that emit poison gas through their leg-vents. The battles between the titans of flesh and the titans of metal ravaged continents, and in time Mechos went insane.

Before madness overtook it completely, it spawned a second sentient city, Libreum. Libreum wrapped technology in magic, making it easier for humanity to understand, and it communicated with humans through books. The books of Libreum are dangerous, spawning dragons, corrupting dreams, turning nightmares into reality, and teaching humanity rituals it can barely comprehend — let alone control.

But despite their many downsides, the books are effective. Over the past century humanity has summoned powerful Bleakflames, winged warriors capable of standing up to the Living Abattoirs; convinced some of the dragons to fight alongside them; and developed technology to aid their soldiers and rat-men allies alike in surviving the wastelands where the Living Abattoirs and War-Titans battle.

In this campaign, the PCs will seek out dangerous, unpredictable books that can spawn monsters, invade their dreams, and teach them powerful magics. They’ll journey to Libreum in pursuit of new weapons to use against the Living Abattoirs, breaking the spirits’ siege on this peculiar city. And they’ll work to convince more dragons to ally with humanity. In time, they’ll journey to the wastes, fight alongside rat-men, and fuse magic and technology to fight back against Charnuboleth itself.

Want more granularity, or more things to work with? Want to dive into a specific concept or place from your list and expand it further? Take additional passes and repeat steps 3 and 4 for each element you want to expand.

To keep this article a manageable length, I didn’t take this step.

Optional: 6. Get all crazy

However you choose to create an art book campaign, stay loose, be open to weird ideas — and conjunctions of ideas — and don’t hesitate to write down things that sound stupid at first.

This article is the spiritual successor to one I wrote back in 2009, The Decamer Campaign: Start with D&D’s 10 Stupidest Monsters…, and the freedom to use constraints in a positive way is an important component of both approaches — as is letting what at first seems stupid marinate until it becomes interesting.

However you approach creating an art book campaign, I hope you have fun with it — and if you’ve got suggestions for fruitful art books to use, drop them in the comments!

7 Responses to The Art Book Campaign