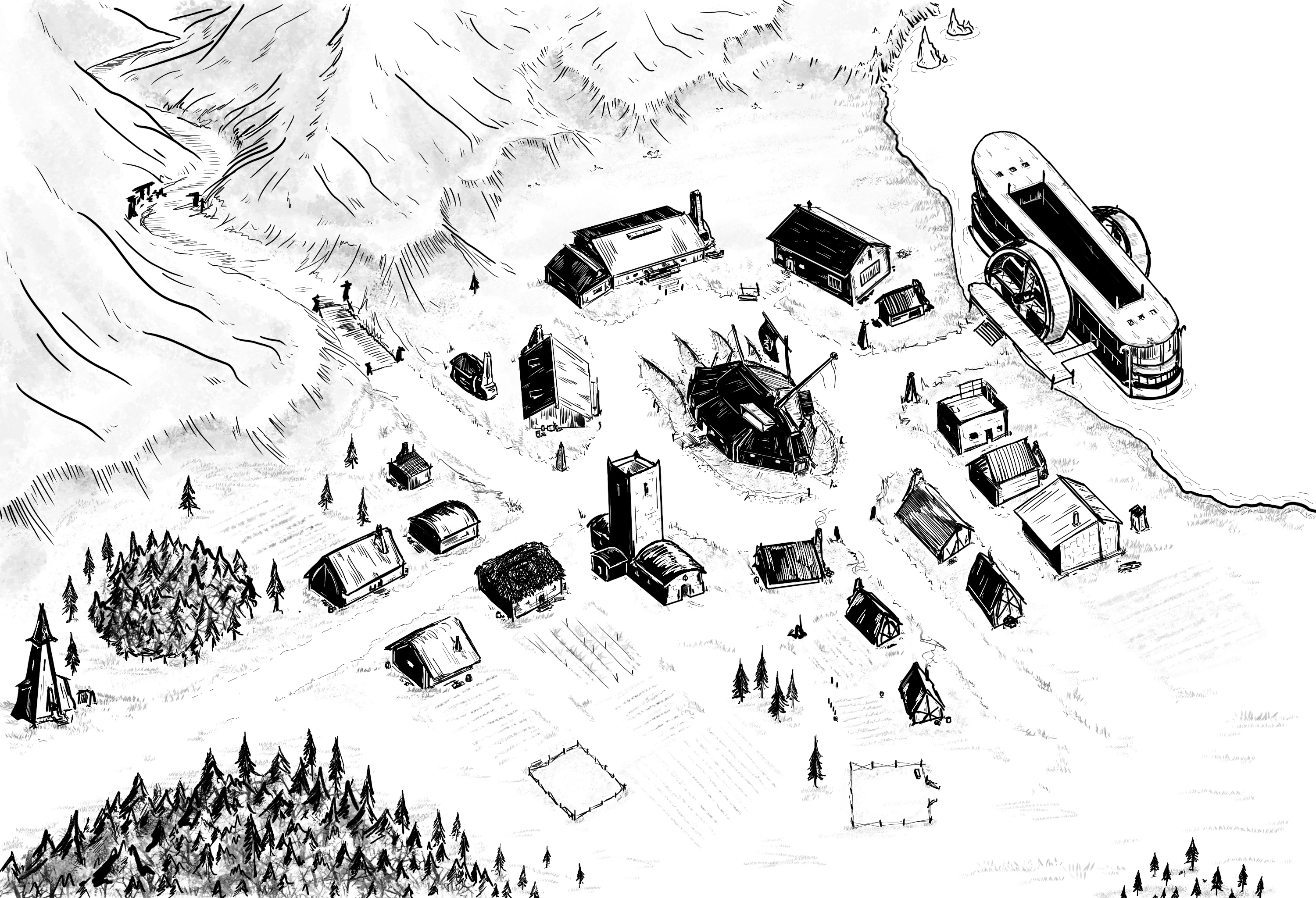 As you emerge from the Pineward Forest you see the mountains known as the Airy Peaks. They loom in the north, grey, black, and unnaturally bare of snow. The Red Runner River guides your approach to the mountains and the town known as Foot. The river narrows as you come up to a stone bridge arching over it. On the other side you see the farmlands being worked by people, you notice all of them are human. Beyond them, in the shadow of the mountains, rests the town of Foot. It sits right in a crook of the mountains and the Red Lake, called such because the water is red. Some believe the water is colored with the blood of all who’ve died within the Peaks.

A waterfall feeds the lake, pouring out of the mountain but you don’t really hear it as you reach the edge of the town which has been built up around a strange building. It rests in what looks like the indentation of a huge dragon’s footprint. The sign hanging by the door shows a set of scales with red dragon scales on them.

Surrounding the odd shaped building are several storefront establishments making up the center of town. Near the back of the town is a one story building with several towels drying in the windows.Â A sign of a bathtub stands near the pathway leading to the front of the building and steam can be seen escaping from a chimney in the roof.

You can’t help but notice the local constables station and jail. The tall stone tower with bars on the windows and the man wearing a star on his green jacket sitting out front in a rocking chair are a dead giveaway.

A short road heads to the Red Lake on the east side of town. It ends at a dock and a red and white river boat, or a lake boat in this case. The water wheels on the ship are a multicolor affair, but the colors are all stained red from the water of the lake. A few people move about the deck attending to tasks.

In the back of the center of town a metallic ringing of hammer on metal can be heard. It’s a blacksmith’s forges where several dwarves and humans work weapons, farm implements, armor, and other various pieces. Attached to the forge building and area is the storefront.

Just to the left of the Blacksmith is a two story building with no first floor windows. When you walk near the door a variety of smells and scents assault your nose. The sign hanging by the door has two flasks painted on it, one filled with a red liquid and the other a bubbling green.

To the west of that building is a road leading right to an opening in the mountain with a large painted sign pointing down it. It reads:

The Airy Peaks & the Goblin’s Wares.

There are several other buildings in the town. One is a general store with several wheelbarrows outside the stone building. A shopÂ that has several displays of clothing in the window and a sign with a spool of thread and a needle. Then there are a bunch of houses, some near the mountain, which very suddenly rises up out of the ground, and others trailing off towards the farms. To the west you see the multicolor beauty of a flower field filled with all the colors of the rainbow right next to an old stone tower. In the middle of the field is a stone block. Surrounding the flower field is a forest.

Welcome to the town of Foot. May your stay be filled with adventure and fortune.

The town of Foot is the home base of any Airy Peaks campaign. It’s a place for adventurers to rest between delves into the Peaks, pick up rumors, spend their coin, make alliances and enemies with other adventurer’s, find hirelings, and get caught up in an intrigue or two, especially since it’s the home of the Cult of the White Fangs, the Church of Purity, and a nest of vampires. The characters might even meet a young lady who is really a golem.

In my next few Airy Peaks articles I’ll be talking more about the town of Foot, and when the series about Foot is done you’ll have a home base town you can use for your games.

Header art and Map is by Drew Smith