Over on Google+ someone started the meme #7rpgs, which I think is quite clever. When I posted mine, I picked the seven games I’ve played the most often. The leap from that concept to the seven games you’ve the most run (#7rpgsrun, which I started last night) was a short one.

Years ago, our own Don Mappin wrote an excellent post on his now-defunct personal website about ranking your favorite campaigns. While I think the original is gone, my personal list of 10 (as of 2007) survives on Treasure Tables, so you can at least get the gist of the idea.

I think this stuff is important to understanding one’s own tastes as a gamer. We only get so much time on this Earth, we don’t get to decide how much time that is, and we all want to spend a portion of it gaming. So why not pay some attention to how we’re spending that portion? I know I don’t do that as well, or as often, as I could, and things noodling about top 10 campaigns, rating games on RPGGeek, and taking stock of most-played and -run games are all part of an effort to do better.

I know I’m an odd duck in this respect, as the number of people who obsessively rate their entire gaming collections is pretty damned small, but I don’t mind. I think it’s valuable, and if you don’t that’s cool by me.

Here are the seven RPGs I’ve played the most since 1987: 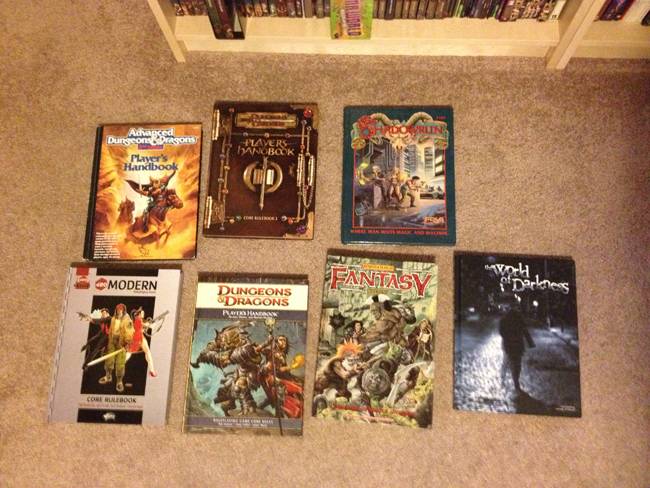 …and the seven RPGs I’ve run the most: 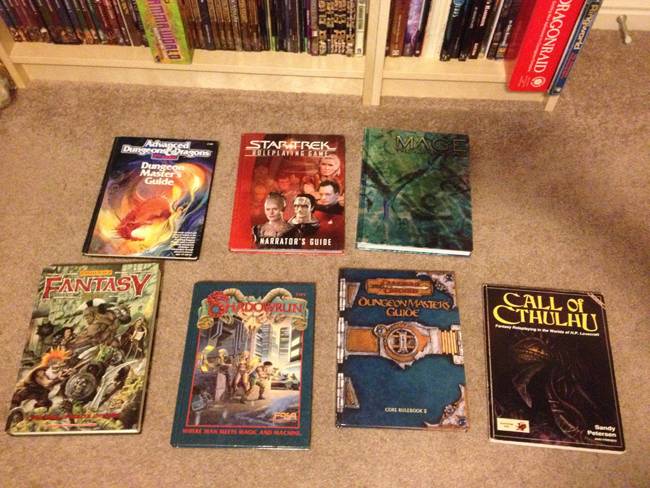 What does it all mean?

I won’t bore you with the personal details — as I think the most interesting thing here isn’t my books, it’s your versions of these lists — but I will share a few things that jump out at me as starting points for considering your own experiences as a GM and a player.

The first thing I noticed about my lists is the easiest thing to notice: AD&D 2e is the #1 game on both lists. It’s not the first game I ever played, but it’s the first one I bought into and ran, and the one I got into at an age (12) that meant I had a lot of spare time to devote to it. The gap between AD&D and the next game in either photo is probably better described as a gulf, not a gap.

The difference in play time between the first and the last in both pictures is also huge. I’ve probably only run 5-10 Call of Cthulhu sessions in my life, compared to dozens and dozens for 2e; ditto with World of Darkness (a placeholder for a number of games), which I’ve played a ton less of than most things ahead of it in the most-played list.

The fact that Call of Cthulhu is one of my favorite games and yet one I’ve run only occasionally, and not played enough to make it into the top seven (though I’ve played quite a bit of it), is a bit depressing. Less depressing is that two of the games on my most-run list, Mage and Star Trek, were run within the last few years — which tells me that despite having a kiddo, starting a publishing company, and starting to look at 40 as a Real Thing That Will Happen, I’m still gaming my ass off.

I find the overlap interesting too, though I suspect others’ overlap will be more telling. Mine tells me that when I find a game I like, I wind up both playing and running it more often than not. Which seems like a good thing.

Not shown in the photos is the fact that I would be hard-pressed to play D&D 4e or 3e ever again, and would think pretty hard before playing AD&D 2e as written. Which means that looking back I’ve spent an awful lot of time playing games I wound up not enjoying that much mechanically (though in all cases, good gaming was had because of good people and fun times, and often cool campaigns as well). Inertia is a powerful thing.

So that’s where staring thoughtfully at these two photos while stroking my beard and going Hmmmmm in a deep, sexy baritone voice (*) gets me. What do your lists look like? And what do they tell you about yourself as a GM, a player, and a person?

For the record, no one has ever, nor will ever, describe my voice as “deep,” “sexy,” or “baritone.”
This post is brought to you by our wonderful patron Erik Hymel, supporting us since July 2016! Thanks for helping us keep the stew fires going!