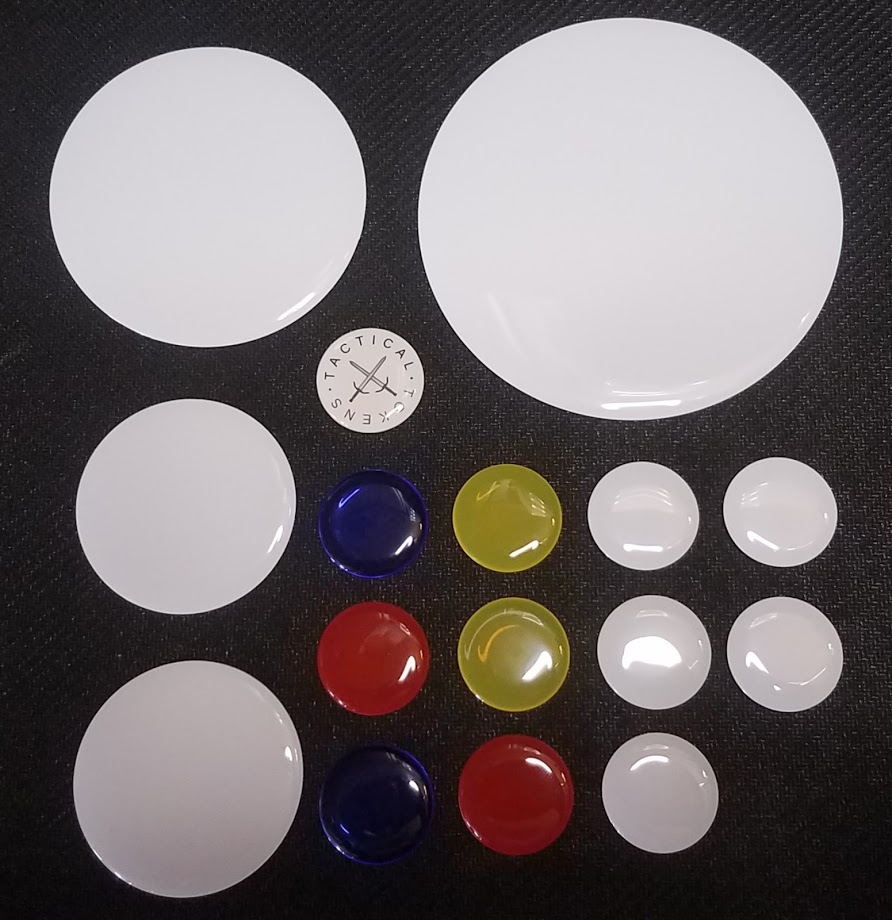 Today’s review is going to be a little different than my regular reviews. This time around I’m taking a look at Tactical Tokens, blank tokens that can be written on and used for games that benefit from tactical representation. Tactical Tokens currently has a Kickstarter going for a new run of these tokens, and I did a review of the previous run of tokens on my blog here. In the interest of full disclosure, Tactical Tokens provided me with samples to review for this article.

If you read this article in the future, thank goodness we survived 2020. If you are reading it closer to when it was written, obviously tokens as physical objects are more useful in face to face gaming. That said, I’m not extremely comfortable with using VTTs, so most of my online gaming involves some means of communicating, but not necessarily an online representation of a map and tokens. For my recent D&D online sessions, I did use a grid with my Tactical Tokens to keep relative distances in mind. I would have loved to have had these when I ran my Storm King’s Thunder game online, where I used a whiteboard with notes on distance, constantly updating it and drawing lines and lines and lines to track movement.

A comparison of the 4″ tokens from the current run, versus the 4″ token I purchased for my previous review.

What In The Line?

The tokens that I’m looking at today include 1″, 2″, 3″ and 4″ blank tokens. All of them are designed to take dry or wet-erase writing. In addition to the solid white blank tokens, I also received two each of the 1″ red, blue, and yellow tokens. One thing that I immediately noticed is that the 3″ and 4″ tokens are now manufactured in a similar manner to the 1″ and 2″ tokens. The previous 3″ and 4″ tokens that I picked up for my last review were thicker plastic, although they still had a white surface that could be written on with dry or wet-erase markers.

Just as I did in my previous review, I wanted to look at what these tokens would look like in an actual game situation. I also wanted to see how the tokens looked after being erased and written on again. For today’s exercise, we’ll use my game’s current player characters. Say hello to them if you will. 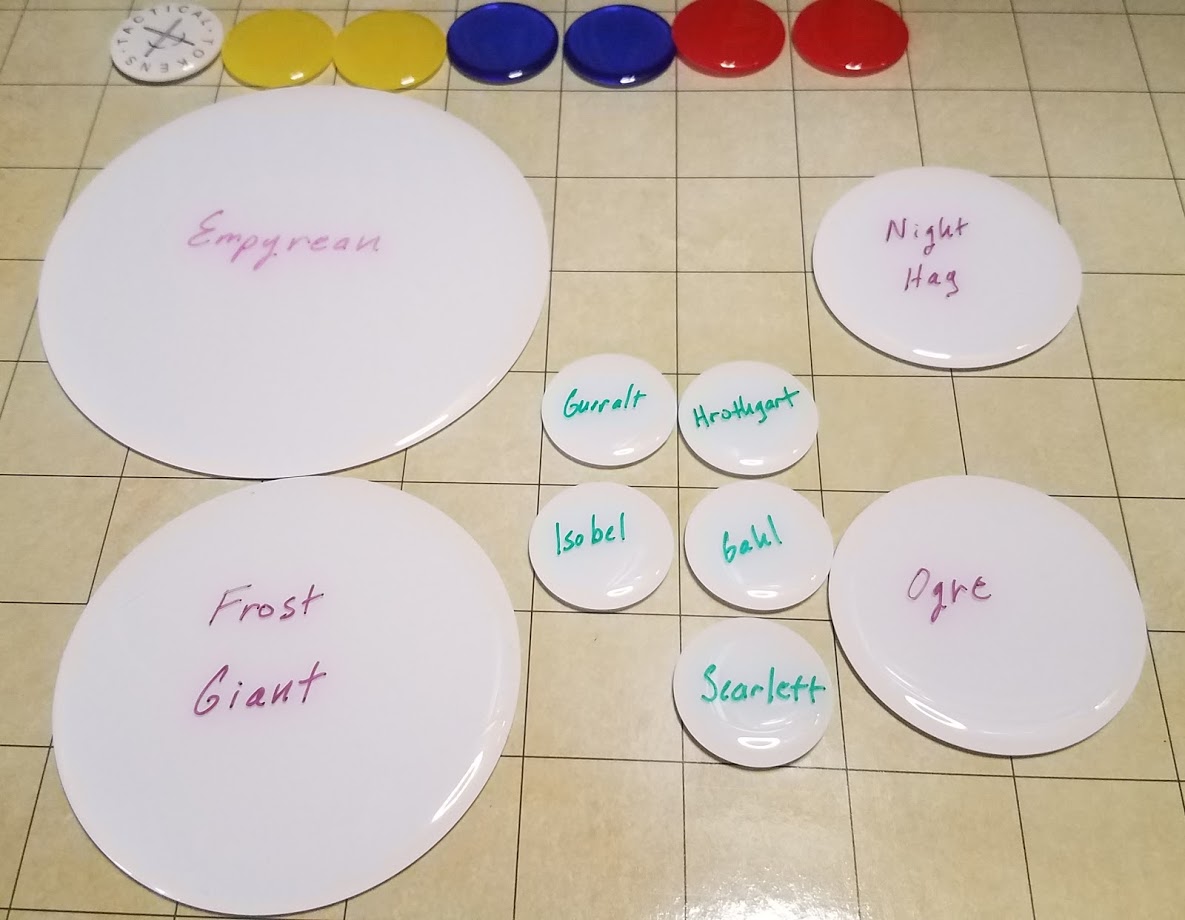 I wrote the names of my group’s player characters on a few tokens, as well as a few sample monsters of different sizes. I used Expo Ultra Fine Point dry erase markers for this demonstration. I would also like to point out, I would never be so mean as to assemble this particular set of foes for my players. At least I haven’t up to this point in the game.

Writing on the blanks was very easy. Given that ultra-fine point dry erase markers have a tendency to dry out quickly, the markers took the surface of these blanks with some precise lines and clear colors. 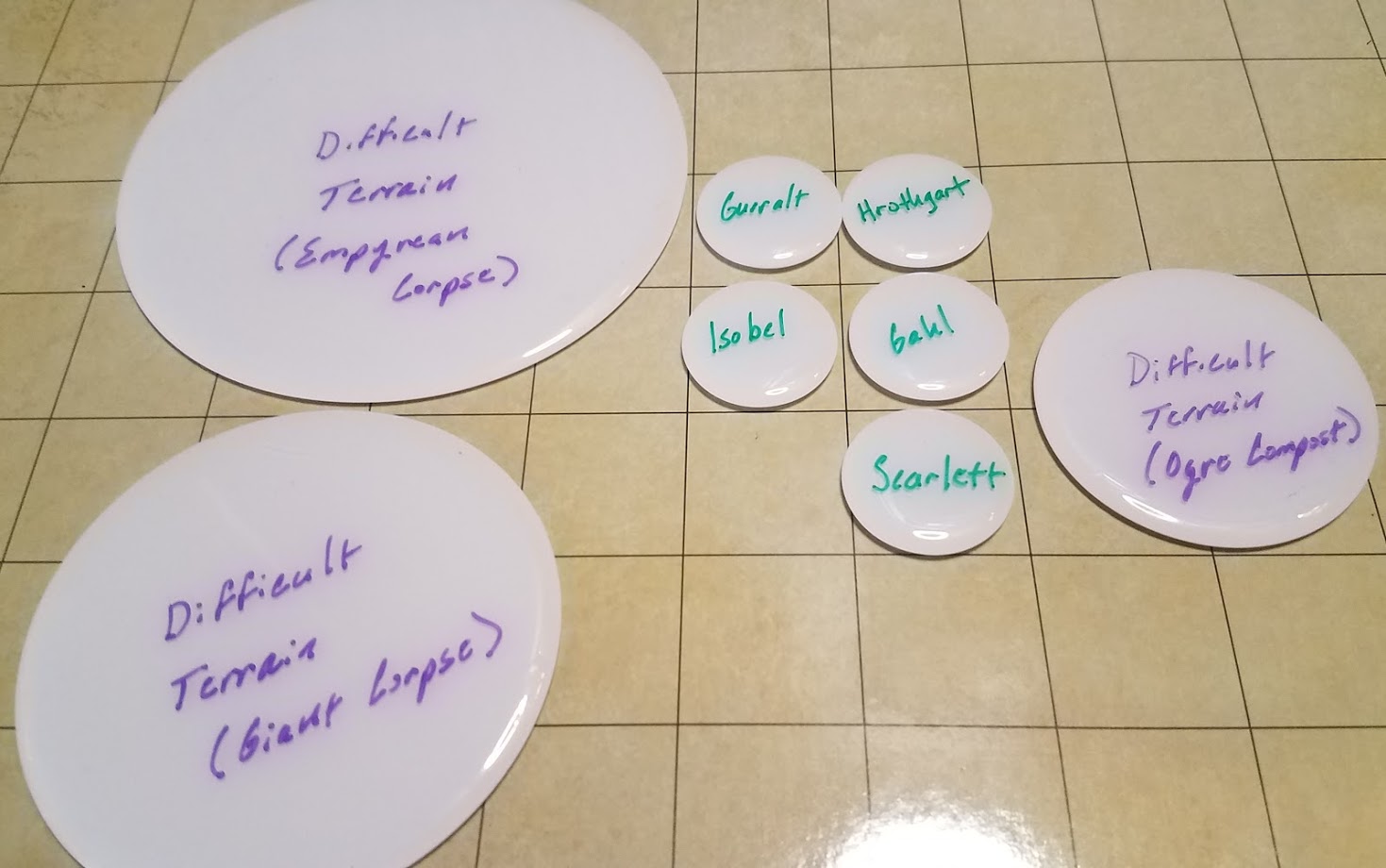 The night hag got away.

Now we’re going to take a look at what the blanks look like once they have been erased and written on again. I used the same dry erase markers that I used for the previous image, and all I used to erase them is a standard eraser that often comes with dry erase marker kits. It only took a swipe or two to remove the previous wording, and then I wrote new comments on all of the larger blanks.

We’re going to assume that my player’s characters continue to be prosperous in their adventuring careers. 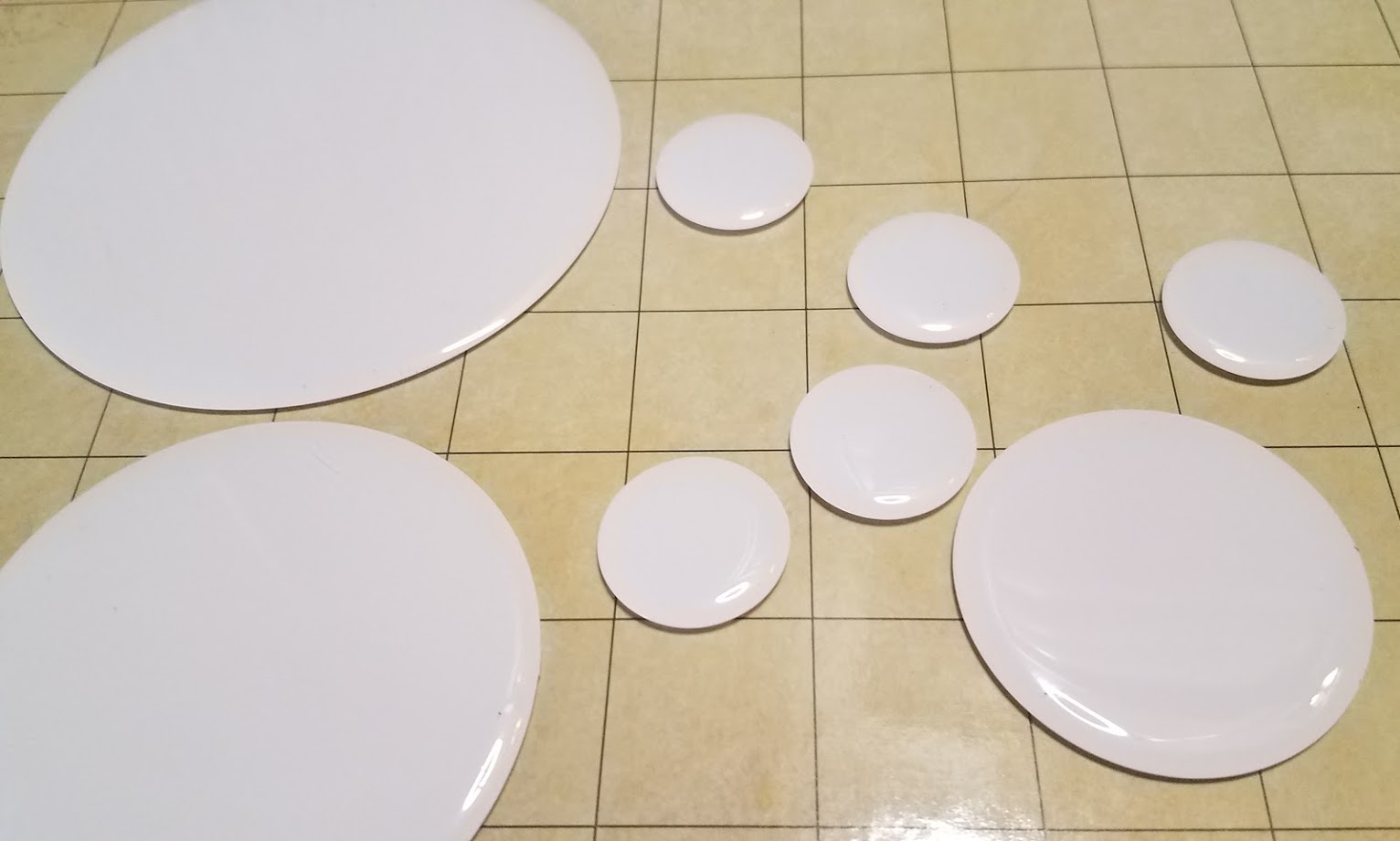 All clear, ready for the next initiative roll.

Now I wanted to see what all of these looked like once I wiped away all of the dry erase marker that I had used on them. Just as before, I used an eraser that comes with a standard kit of dry erase markers to erase the tokens, and it only took a few swipes to clean them off entirely. Looking at them, it’s pretty hard to find much residue, and this is using colors that can often leave more of a trace than black dry erase markers.

Now that we have looked at the blank white tokens, lets take a look at the clear blue, yellow, and red tokens that Tactical Tokens sent me. I did not pick any of these up with my last order, so I am interested to see how these tokens look, feel, and hold writing. 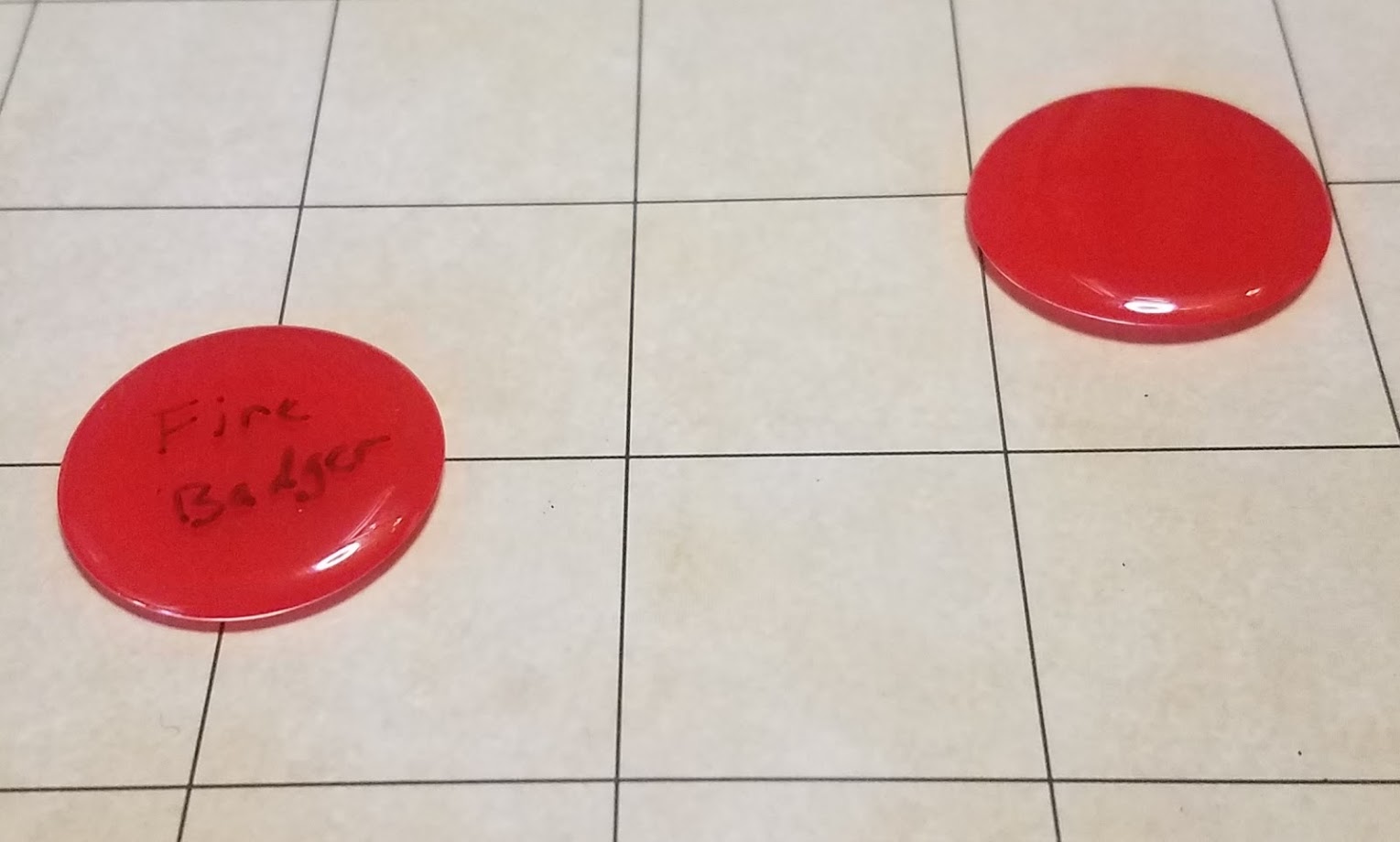 Not only is the fire badger a good friend to Hrothgart the bearfolk druid, they also practice proper social distancing when not setting things on fire. 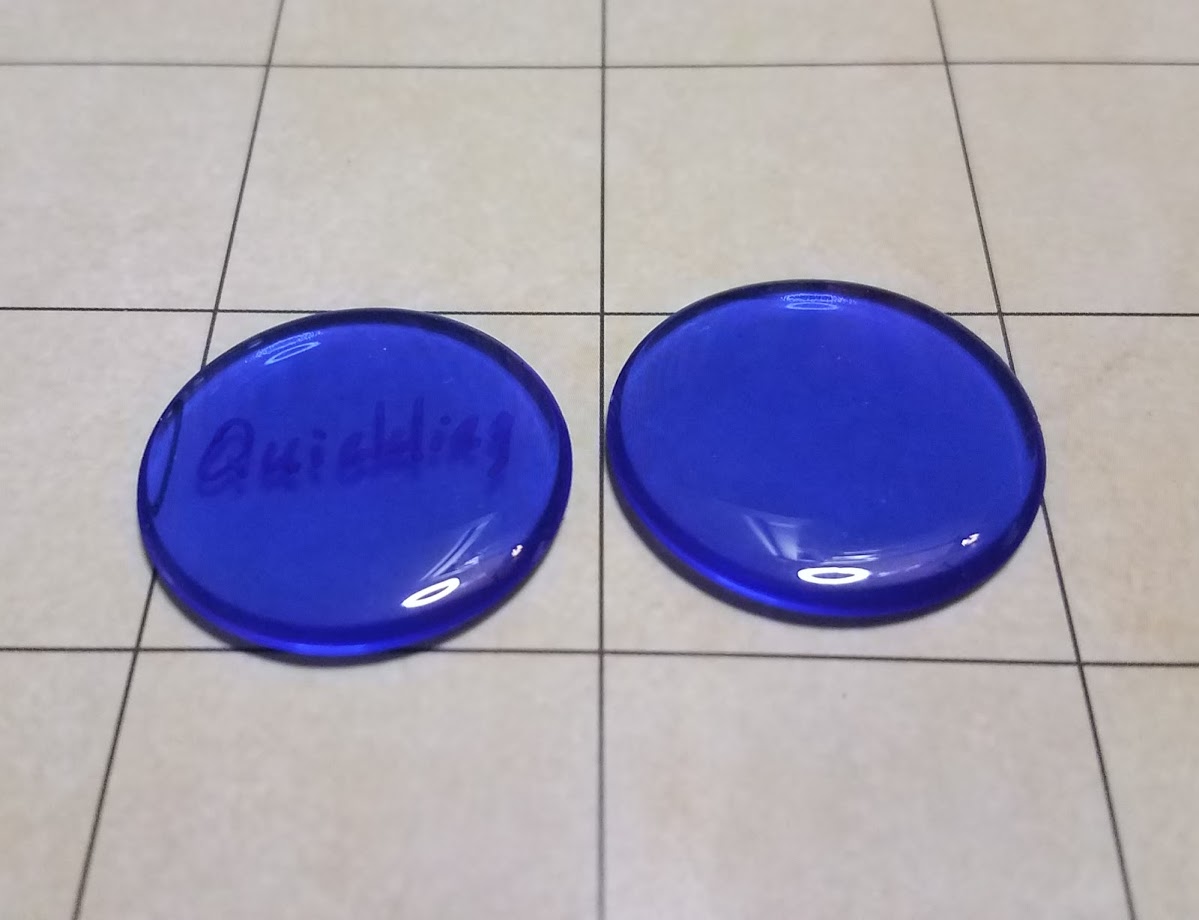 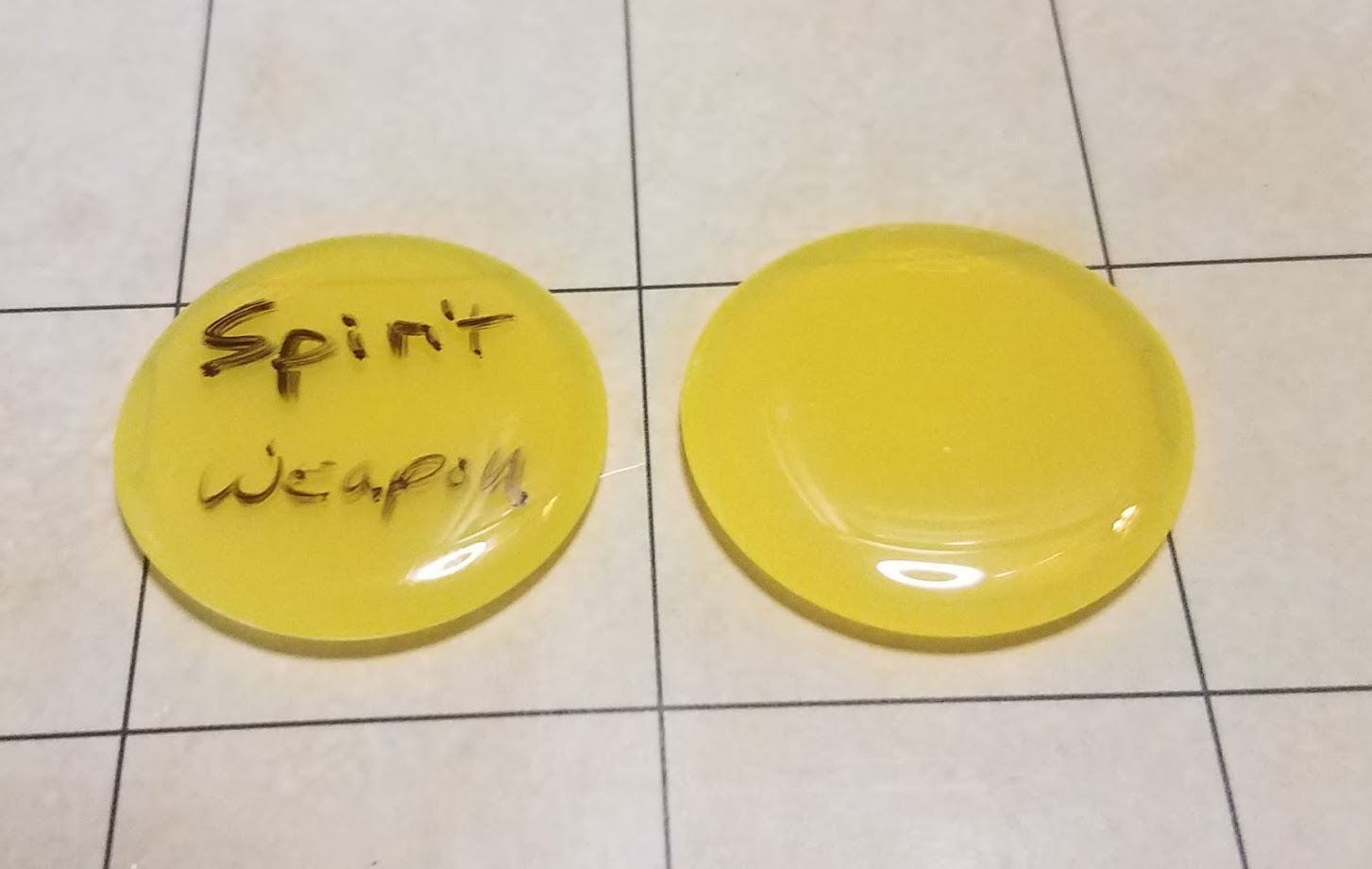 For the record, I miss playing my cleric of Jergal and using his spiritual weapon, a quill that writes names in the book of the dead. You know what they say about pens and swords . . .

In general, the color tokens feel just a little bit, for lack of a better word, gummier than the blank white. The color makes it hard to read the writing on the blue and red tokens, especially, but the yellow token was difficult to mark on with the ultra-fine markers, and I had to move up to just the fine tip markers to write on it for any good results. I’m not overly disappointed with this result, however. It would still be relatively easy to mark these with numbers to keep track of multiple instances of something on the tactical map. In fact, my first thought is that I would like having these to track things like spell effects, like summoned creatures or the location of movable effects, that come up after initiative order has already been established.

In this case, having the bright colors that pop will be better than writing out another name on the tokens that might get mistaken for a monster or a player character. Bright colors work well for this kind of signifier, and I think I might want to get a few more of these for just that purpose. When it comes to removing the dry erase marker from these, even with the gummier texture, it still only takes a few swipes to remove the writing, with little to no residue from the markers left afterward.

If you read my original review of the first set of these tokens that I ordered, you will know this is the kind of tactical RPG solution I was pleased to see become available. While everyone loves having the perfect miniatures for those epic set pieces, for any situation that is going to be more fluid, where you may not know where and when a fight will break out, I would much rather have tools that work for a variety of situations, than to try and come up with a range of “close enough” miniatures. There are also situations that come up, like vehicle chases, or even suddenly appearing persistent zones, where tokens are very handy to have on standby.

We Don’t Use Flanking in These Parts

I don’t want to ding the clear color tokens too hard for this, because I don’t think its the best use of their functionality, but they are a little more difficult to write on, although they appear to be just as easy to erase as the smaller tokens. I’m not sure this is really a negative, but I’d love to see some of the larger sizes in clear colors in the future, since marking effects and zones seems to be a good implementation of this style of token. I’m also interested in potential future tokens with preprinted creature symbols on them to denote broad categories, but that’s for another day.

If you play roleplaying games that lean towards tactical representation, I think these would be a solid addition to your library of gaming tools. They are flexible, easy to write on and erase, they are durable, and they feel good to the touch. The multi-color tokens are bright and attractive, and the clear white blanks are shiny and slick. They feel like they should hold up to a lot of use in gaming at the table.

If you are more accustomed to set pieces with exact representations, the utility of these may be lessened for you, but even then, spell effects and summoned creatures seem to come up even in the best-planned games.

What are your favorite non-miniature solutions for tactical games? Have you ever needed to improvise, and if you have, what are some of your best improvisational tokens that you have used in your games. We would love to hear about your tactical deployments below.