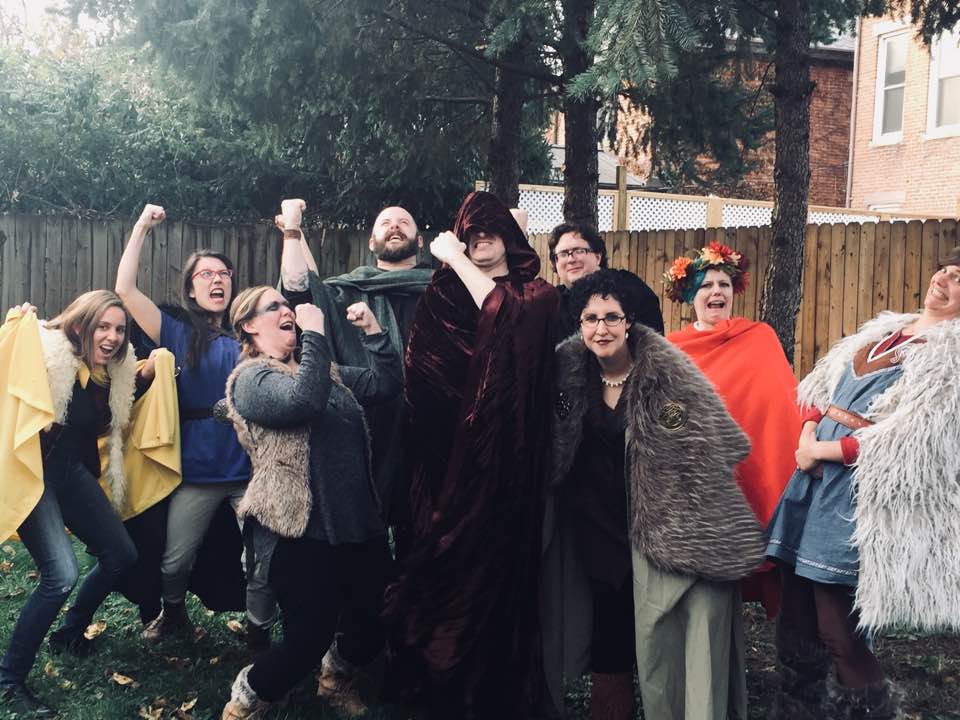 “I don’t really feel comfortable a lot of the time in LARPs,” a friend confessed after playing my run of The Inheritance, a viking family drama LARP by Luke Crane. Â “I dunno it’s just like, extra nerdy? Nerdier than tabletop? And there’s costuming? It’s like, harder for me to separate the game from what I’m doing I guess? I don’t know what it is it just feels weirder somehow. I was nervous before I played!”

I nodded along, listening. I’ve actually heard a similar story from lots of people about LARP. Some people are more nervous about “parlor larps” or “emo larps,” games that have emotions, romance, or touching. Some people are nervous about wearing costumes. Others just aren’t really sure what to do when walking around instead of sitting. LARPing has a completely different set of social cues and rules that maybe they’re just not used to.

All of this is completely perplexing to me, since a lot of my entry into gaming was through vampire larps and goth clubs, both places where moving around and costuming ridiculously were a huge part of the fun. I’m also very comfortable at house parties! So when my friends tell me this stuff, my ears perk up with curiosity and I try to learn what makes them so darn nervous about larping. Here are some of the things I’ve found.

Embodiment is something I pay close attention to. I think that being genderqueer, a studier of human behavior, and having an obsession with body modification gives me a bit of an edge sometimes. I like to examine how people embody themselves, how they hold themselves, how they perform gender in their body movements, how they lounge. Embodiment is a huge part of LARPing. The joke is that LARPing is just gaming standing up. That’s true, but some of us are more comfortable in our bodies than others. With a recent diagnosis of fibromyalgia, it’s actually harder for me to sit for many hours than stand and move around in a LARP, so I can empathize.

There’s also the fact that moving your body around brings your mind closer to your character in many ways and that tabletop is more of an abstraction. Do you want to talk to someone? Move over and stand next to them. This simple action can actually cause a brain to believe the fantasy a little more. I’m reminded of the third hand illusion, where a fake hand is put in front of you while your real hand is hidden. After some sensory stimulation, your brain begins to believe the fake hand that you see is so real that you flinch when it’s stabbed. Our body movement is very closely related to our reactions to things, and a LARP can intensify that, even if there’s no simulated sword fights and you’re just moving around a room.

I’ve heard that some people have amplified feelings when they’re embodying characters in a LARP. There’s been some discussion about this before from Lizzie Stark and other prominent LARP writers, but a lot of it has to do with Alibi.

Alibi is basically the mask that you wear that is your character. You put it on, your character takes actions that are not entirely you, but definitely driven by you. When you’re roleplaying at a table, there’s more abstraction between you and your characters actions.
A player might describe these actions, or even just roll for them. In a Larp there is gesturing, dancing, sitting, standing, falling down, etc. So the distance between the player and the character can shrink, therefore leaving less alibi in its place. With less alibi, a player can feel closer to their character.

That closeness can lead to bleed, where a player feels what their character feels. This type of crossover can be as simple as “my character is an outsider, and I feel that way sometimes too and understand it” or as complex as “I just broke up with my boyfriend and so did my character and now I feel extra sad”. This type of bleed can happen in any game, really, but in a Larp where the alibi is much smaller and all the embodiment makes it feel more real this can hit close to home.

Sometimes this is really fun! Other times it can feel super intimidating. Â It really depends on the people involved and what their preferences are. I love feelings and often play close to home as a kind of experiment with my own feelings about issues in my life. But that’s me. There’s also Larps that play heavier on emotions than others. I’d put Inheritance as a dramatic Larp, but not a feelings-heavy Larp that’s meant to pull on your emotions. So in my experience running this for friends, it helped them get more into a Larp type environment with low emotional bleed risk. 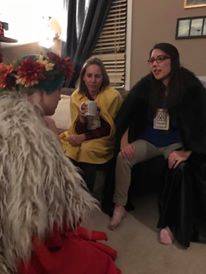 A neat thing happened in this run of the game was that most of the players were ladies, while the gender of characters were split pretty evenly. This is where many gestures, postures, and gendered movements become highlighted! In Inheritance the gender of the characters needs to stay as it is written because of gender roles in Viking culture and their relevance in the setting of the game (a long house, where women have a lot of social sway). I loved seeing a house full of mostly lady vikings shouting and toasting to Odin, it was a delightful scene I wish could exist in all of our games and viking media.

I love seeing what happens when people embody a different gender, or people who aren’t cis men get to be in leadership roles within the game. It subverts a general dynamic of spaces where cis men typically are in leadership roles, and the space becomes more welcoming for other genders. I definitely recommend doing this in LARPs if at all possible. The space surprisingly transforms from one of unsure nerdery to one of liberating roleplaying.

Overall I think this approach to introducing people to LARPing has been successful! Taking a less emotional game, with clear boundaries, in an all gender welcoming space really helps people experimenting with embodiment within LARPs. Transitioning from ttrpgs to standing up and roleplaying might be weird and new for some people, but I hope to share with more of my friends how much I love it, and how cool it can be to embody a character a little bit more.

What LARPs have you played recently and loved?

2 Responses to Tabletop vs Larp Embodiment