While I was at Queen City Conquest two weeks ago, I ran a handful of games during the weekend as well as got to play a few games. During the weekend, I was very happy to see how quickly people at the table would start making table tents for their characters. I have been doing this for a while at home and in public games, but I don’t think I have ever talked about why table tents are such great tools for your games.Â

So, here we are, get an index card and a sharpie and let’s dive into table tents!Â

What Is a Table Tent? 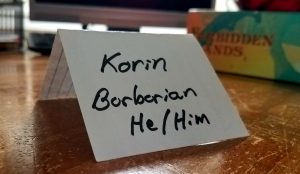 In the US, table tents are often made from index cards, though some dry erase table tents are showing up, making it more ecologically friendly. If you are using an index card you fold the card along one axis, often the short axis so that the tent stands taller. You then write your information on one side to face out, though I will encourage you to also write it on the other side, facing you so that people directly next to you can also see it.Â Â

I also recommend writing your table tent with a marker over a pen or pencil, so that the lines are thick and easy to read across the table.Â

Before we get any farther, I need to acknowledge that table tents are a visual tool, and that what I described above only works for people who do not have any visual impairments. A person who is visually impaired may not be able to see a tent across the table. In that case, a possible alternative could be to have a list of all the character’s names in front of them. When in doubt, simply ask the person how they would like to help organize the other character’s names.

If I am running a game, I will take it upon myself to have index cards and makers to pass out to my players to make their table tents. Often, I will fold them and have them ready, and then during the start of the session, have everyone make their table tent as I am explaining rules and getting things oriented.Â

If I am a player in a game, and the GM has not passed out table tents yet, then I will take it upon myself to get out a marker and some index cards and lead by example by making a tent and encouraging everyone else to do so.

What does it do?

So what does a table tent do for the game? First, it helps greatly with immersion. Having easy access to character names while playing will help you stay in character as well as helping other players stay in character by addressing them by their character’s name.Â

Second, you can put other information on the card (see below) that can help facilitate the game. By including additional information you are helping the GM in running the game because they will not need to ask you for certain information during play.

Third, it can help people feel more comfortable at the table. This is especially true when it comes to pronouns (see below).Â

So besides your character’s name, there is more information you can put on your table tent. Here are a few suggestions:

Including what niche your character represents will help the GM and others at the table to identify who the right person is for specific parts of the game. If a player is thinking someone should pick this lock, then scanning the table and seeing that there is a table tent with Rogue on it let’s them know who to address.Â

Also, some classes/playbooks may have special moves or abilities that the GM may take into account during the story. Knowing who is playing that character facilitates them providing information to the right person. For instance, you may be looking for secret doors in a B/X D&D game, and the GM knowing you are an elf will make a difference in the chances of finding it.

If your game has multiple species then having it on your table tent allows everyone to identify which species you belong to. This is of great help for everyone to visualize your character properly. Also if you enter part of the story where being of a certain type of species is important, then having that quick visual reminder helps the flow of the game. For instance, a Dwarven magical artifact has different abilities if wielded by a Dwarf than anyone else.Â

Second, having pronouns displayed is just good overall and something we should all be working towards. We need to normalize the act of displaying our pronouns. So including them with your table tent is one more step into making that a more commonplace activity for our characters and for ourselves.Â

In many games, there is information that the GM often needs. It could be something like Armor Class, or a passive sense rating, etc. Displaying that information on your table tent helps the GM access that information without having to ask your character outright, and keeps the flow of the game smoother.

Players can also put their names on their table tent so that everyone else at the table knows who they are. I will also say if you are putting your name on the table tent, also put your pronouns. Again, let’s normalize that.

If for any reason you are playing games where someone could be playing multiple characters, then have a table tent for each character and put the one you are playing forward, or hold it in your hand when you speak.Â

By the way, this works for GMs too. You can totally make NPC name tents and use them this way while you are running.Â

If your character has another identity – a spy with a cover, a super with a secret identity, or a shapeshifter of some sort – you can turn your table tent inside out for your other identity, or use multiple tents for your identities. This will help everyone at the table know which persona you are in at any given time. Having a talk with your teacher in a Masks game is very different when you are The Slayer vs when you are Susan Montgomery.Â

Take One, Fill It Out

Table tents are an inexpensive and effective tool for helping everyone at your table keep track of your character. It is something that all the characters in a game should do. It only takes a few seconds to fill one out and doing so can help deepen the immersion of your game as well as make everyone at the table more comfortable.

Do you use table tents? At home? At Cons? What do you normally put on your table tents? Also if you have some really artistically cool table tents, share them out on Twitter to @gnomestew and @dnaphil so that we can take a look.Â