Suggestion Pot – Asking The Players To Ride The Rails 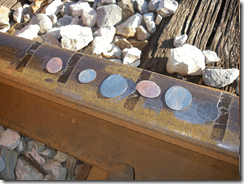 Stew reader LesInk threw an interesting morsel into the suggestion pot the other day. It is about the concept of railroading and how you force an event to happen when the plot absolutely calls for it. The concept is an interesting one, and LesInk put forth a great solution along with the question and story.

I believe I have been a victim of the suddenly-appearing-railroad scenario.Â  There I was GMing my last gaming session when I found myself in a scenario where I thought the players would be forced to a desired endpoint where they are captured.Â  Lo and behold, the players were able to keep fighting off the rounds and rounds of sleeping gas (4E game mechanic wasn’t working as well as I would have liked) and just when most everyone was knocked out, another was jumping back up (can’t fudge the dice, they get saving rolls).Â  In this scenario, they were also trying to break through a grating to a pipe they had entered through and escape.Â  The problem was I have this wonderful next scene that depends on the characters being knocked out.Â  This isn’t my normal mode of operation, but we are experimenting with more cinematic games.Â  Eventually, one of the players pulled out an obsidian horse and used it to pop open the gate, allowing them to flee.Â  I could have introduced a very heavy hand to force the ending to work in my favor, but I decided the characters earned their reward of escaping — they had already been put through enough.

The game ended there for the night and we talked a bit while I stewed over some possible new next scenes.Â  I piped up and asked the players if they would mind letting themselves get captured if I assured them that a few things would happen (namely that they would wake up alive and still have their equipment).Â  To my surprise, they agreed knowing that I was working up to something worthy of playing out.

So, here I come to my quest for advice — when you have something that you need to happen, what are some tips on making it seem plausible without offending the players?Â  And what do you do when you thought the odds were all in your favor and they suddenly go sour?

Yeah, sometimes as a Game Master there are certain things that you need to happen, especially if you are running from pre-published materials. When you’ve got a plot in a game, no matter how loose or how open it is, it often requires some things to happen.

Villains would never monologue if heroes didn’t get captured. The true evilness of the BBEG would never be solidified for the players if the BBEG couldn’t get off one or two successful evil plans. Often these things can be organically created in the game situation. Sometimes the Game Master needs to do a little nudging. And sometimes, mechanics and GMing tactics are outdone by awesome rolls, great player ideas, and the desire not to push our players around. This is the way it should be, but some things need to happen orÂ  the plot needs to change, and that isn’t always a viable option.

I think LesInk’s approaching of the players was an awesome tactic. Laying out that he needed them to be captured and that it wouldn’t create unfair circumstances led to new play opportunities and an intact plot. I would whole-heartedly suggest LesInk’s approach as a possible solution for everyone encountering this kind of situation:

When you need to force something to happen tell your players about it first and assure them that they will suffer no lasting consequences once the event is over.

I’ve been in complete developer mode for the past few weeks, so reading LesInk’s story sparked an idea. As an add-on to LesInk’s solution, I humbly present the idea of the Railroad Token:

This system would work best with a situation that needs to be forced, almost like a cut-scene in a video game, to progress the story along. The Game Master’s token represents the amount of control which they are buying off the players, and the player’s tokens represent the buying off of the control that the Game Master took. I don’t see it being necessary in all situations, especially if you use LesInk’s “Just Ask Them” approach. In most cases that would be enough. This adds a mechanical story element that lets the players cinematically build their own way out of a situation, but ensures them that they can.

(Image: Here – CC BY-NC-ND 2.0)
This post is brought to you by our wonderful patron Stew Skeel, supporting us since February 2021! Thanks for helping us keep the stew fires going!