Strike While The Iron Is Hot 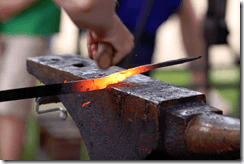 I was just reminded of an interesting concept the other day. My room-mate and I were hanging out in our shared office and talking about the game I am going to be starting up soon. He mentioned, offhandedly, that I’ve been doing a lot of prep for a game that hasn’t started yet. And then he said these bell-ringing words “Oh well, strike while the iron is hot, I guess.”

Something made me grab that phrase and cogitate it around in my gnomish melon a bit. Strike while the iron is hot. It’s a fairly colloquial saying about working while the motivation is there, and that in conjunction with the prep I’ve been doing made me glom onto it as an incredible piece of Game Mastering advice. You should do the bulk of your prep when you are most excited for the game, right at the beginning. It’s simple enough, but it is worthy of some dissection.

All your plots and ideas are clear in your head when you start
When you get that brilliant idea for a game or campaign you are going to run, all of the ideas and concepts flow like the wine of the gods. Everything seems so clear and understandable. You know exactly how Captain Ragerson should act and sound. You know exactly what plots and motivations the princess of the alien planet has. Having a fight with 4 dragon things over a crevasse with 2 rope bridges and a burning forest is awesome! I can use this rule to cause the flames to block off escape and the PCs can utilize these powers to turn the battle in their favor. Two months later when the game actually reaches those points, you will have forgotten at least some of how Captain Ragerson was going to be, you wouldn’t have as vivid an image of the alien princess, and the bridge/dragon/fire/crevasse fight was going to utilize some awesome rule in that spaltbook, but you can’t remember which one. It was right next to the picture of the guy with the lantern, but you can’t find that picture in any of the books you’ve got. The farther alongÂ  you get from an original source, the more things change. Sometimes that is for the better, sometimes for the worse. 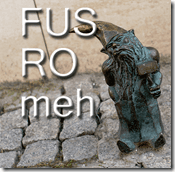 stopping it. Eventually that game faded away. No game is immune to the lack of motivation. The longer things go on, the more shiny newer things look. The game still remains fun, but maybe playing Skyrim seems more interesting than prepping out the combats for tomorrow. If you prepped, or at least outlined, the combats during your uber-excited phase of the game, then putting them together takes less time at the table and less time away from yelling “Fus Ro Dah!” at some virtual Dragons.

You can always change and tweak things later
”But John”, you say, ”No plan survives the battlefield, especially when it comes to roleplaying. Things are going to be completely different once we get a few session in.”Â  I would agree with that absolutely, but that isn’t necessarily a bad thing. Changing things is generally easier than creating from scratch. You can grab and cherry pick elements out of your prep work and modify them as you see fit. The group no longer feels investigating the thieves guild is a useful lead and decides to move into the forest and see what people are hiding out there… Meh, that’s easy to fix. Grab the best NPCs you wrote up for your thieves guild, change some names and motivations and you’ve got most of what you need for an on-the fly encounter with a wandering militia. If you prep (or find online) a handful of generic, archetypal NPCS for the system you are using, then you’ve got stats that you can swab the thematic details over. Even if you end up having to throw things out from your prep work, you have the option of it when you need it.

Working through the wall
Striking While The Iron Is Hot is a strategy that requires a lot of work up front, and that can be 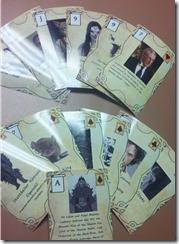 daunting. For the game I’m running, I’ve built a deck of cards bearing pictures and names of the 60 some NPCs the group will likely encounter throughout the game. Many won’t be encountered until many, many, many sessions into the game, maybe… The group might turn left and discover the name of the person plotting against them in the first session. If they do, I’m prepared. I’ve got a name, picture, and stats that I can utilize at a moment’s notice, but I had to do a lot of work to get that far ahead. There were definitely times when I was prepping that I hit the wall and said “Meh, this won’t matter till way later. Find it then.”. I had to push myself past it though and keep working. It means I’ve got way more than I’ll need and in the coming months, all I have to do is show up to game and pick up from where we left off.

Pushing through that wall was the best thing I could do to keep my motivation high, and I did it in a few ways:

All in all, the idea of striking while the iron is hot is pretty standard and applies to many facets of life. However, if you really embrace it in terms of your prep, you’ll find things running smoothly far into the future. So I’m going to issue this challenge. Before you start your next campaign, story arc, or whenever you get inspired for that next idea, sit down and barrel through your prep work. Do it in rough drafts or detailed account keeping. Use Chatty DM’s GITYB system to make the prep it’s own game. Whatever you do, strike while the iron, inspiration, and motivation are hot and fresh. Future you will thank past you for it.

4 Responses to Strike While The Iron Is Hot