I have in the past (here and here) talked about my love for the Story Forge Cards. This is going to be another one of those moments. If you have not gone out and gotten this great inspirational tool, I beg you to read this article to see another example of how cool these cards are, and then go order a pack. If you are already a card carrying member of the Story Forge, then let me take a few minutes to show you a quick technique for creating the background of an NPC.

As I have come to study the creative process, I have found over the years that my best work does not come from a blank sheet and an infinite possibility, but rather when I am given a pile of odd pieces and asked to join them together under one theme. This was most true when I worked on both Eureka, where we used the 36 Dramatic situations, and MasksÂ where we used a series of tags that we had to combine and use. In both cases having to be creative “in a box”, as I call it, created much richer content than had I just written anything that came to mind.

When we are given a blank page, we tend to fall back on things we are familiar with, old habits, and past stories. The blank page does not actually make us more creative, but rather through some form of analysis paralysis we reign ourselves in and go with what we know.

When we use random elements, we bring about two levels of creativity. The first is that we can get an element that is out of our safety zone, forcing us to now use that component in our creation. The second is that when we have a random assortment of elements, we have to find a way to connect them, and in doing that we exercise that creativity.

There are two types of NPC’s that I create in my campaigns. The first is a plot purposed NPC, a character who’s purpose is to advance the plot of the game. The plot purposed NPC is easy to create a background for, because I need them to have the necessaryÂ back storyÂ and personality required to keep the plot moving. They often don’t need to be multidimensional because their purpose is tied to a specific plot.

The second is the general purpose NPC, someone who exists in the campaign world, but does not have a specific impact on a plot (at that time). The general purpose NPC is different. They can be anything, and have any kind of dreams, desires, faults, etc. These are the blank sheet of paper for me, and so many of these turn into my own mental stereotypes. I have a gruff but nice bartender, the honorable captain of the guard, the enigmatic wizard, etc.

Four Components of an NPC

So to make these NPC’s more varied, I needed to get away from the blank sheet of paper, and get some random elements into this process. I wanted a few elements, but no so many that it would take too long to work them into the fabric of an NPC. I started with personality and immediately had to riff off of the White Wolf old World of Darkness system.

One of my favorite things in the oWoD system was the concept of Nature and Demeanor. Nature was what kind of person you were on the inside, and Demeanor was the kind of person other people perceived you as. Soak that in. This alone makes for some incredible NPC’s as you can have aligned or even better nonaligned Natures and Demeanors. You could have the Police Officer who’s Demeanor is Justice, but his Nature is Sadist. He loves catching people who break the law, but has a habit of excessive force.

So I took those two components, but I also wanted some kind of motivation. What drives this NPC? In thinking about that, I decided on two motivations: what is that person pursuing and what is pursuing that person. The first represents what the NPC desires, is seeking, etc. The second represents their past, someone who has an interest in them, something they have done in the past, or the thing that haunts them. We are as much motivated by the thing that we want, as we are by the things that have happened to us in our past.

As with all the uses of the Story Cards, you lay out the cards and then reflect on their meanings. The meaning of the card coupled with their position gives you the elements of their background. From there, some good old creativity links them together into a narrative that tells about the NPC.

So to give this a test run, lets cast an NPC for a campaign I am working on. This will be a female bartender who works in a run down hotel. I cast the cards and get the following: 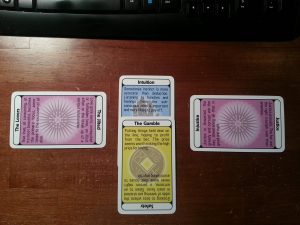 Here is what we got:

Lets take a crack at this:
Tina was once married to what she thought was a good man. He was a liar and eventually he cheated on her, then left her. In the divorce proceedings he convinced the judge that she was an unfit mother and got sole custody of their child. The divorce was a disaster for her and she lost everything.

Eventually she got the job at the bar, where the money was enough to live on and to save some, but not nearly fast enough. She discovered while making small talk with the patrons that she had a knack for gambling, all based on her good instincts.

Through her gambling the money came faster and she is well on her way to getting enough money for a lawyer who can reverse this situation, get her child back, and get her what she deserves. In the background is the husband who jilted her who’s actions are a constant backdrop.

That gives me a lot to work with in the campaign: the need for money, an angry ex, and her quest for justice. I now have all that available to me as I work on future sessions. It is doubtful I would have come up with something like that on my own.

Not every NPC needs to be complex and detailed, but the more depth your NPC’s have the more possibility they will either fit into your story or generate their own stories. The use of random elements being combined into some structure is a powerful tool for maximizing our creativity.

The Story Forge Cards are a great tool of random elements and their tarot-like use makes them multidimensional. I cannot say enough for them..go and get a deck.

So what short cut methods do you use when creating personalities and backgrounds for your NPC’s? How do you avoid going back to the well too many times, and force yourself to be more creative when working on NPC’s?