I am madly in love with Kickstarter,Â and have been backing a number of projects since I discovered it last year. Earlier this year, I backed a very interesting project called Story Forge; a tarot-like set of cards for creating plot ideas and character backgrounds (genius!). This week, I got my deck of Story Forge cards and was dying to try them out.

I will let the creator of Story Forge give you the full details on the cards and all their uses. Here is a condensed version: There are 88 cards, glossy and of good quality. Each card has Â good and bad (external and internal) story elements on it. The card can be cast either up or down. The elements themselves are pretty standard things you would find in different literature examinations, and each one comes with a brief description. The descriptions are very open to interpretation, which is a good thing, as we will see.

The instruction booklet contains different ways to cast the cards for a specific outcome: Character background, an Action Story, The Train Wreck, etc. In a given layout, each card position has a different meaning to the character or plot. This is where the genius of the cards shine. By casting cards into these positions they direct your creativity giving you a loose structure, some suggestive elements, and enough room to let your imagination work.

We have covered other Tarot based techniques here on the Stew. What makes these stand out, is that they are specific for literature, and their layouts are specific to types of literary structure. You won’t be reading anyone’s fortunes with these, they are tailored for the creative process.

Using Them In Your Game

The instruction book says that for RPG’s the character backgrounds are the most common use for the cards. The casting of the cards then creates the various facets of the character, to which a little imagination can link them together and spin a rich background.

The plot layouts are a bit more structured for story writing, as they cover the full story arc (introduction, rising action, climax, denouement). I will be tinkering with the layouts to come up with some RPG-specific templates, which will be more about setting up a situation and not what the resolution would be like. I will update you with my progress as I tinker.

Time To Put It To The Test

I could not wait any more, so with a few quiet moments in my office I used the Character “Quick Pick” layout to generate an NPC for a fantasy campaign, and here is what I cast: 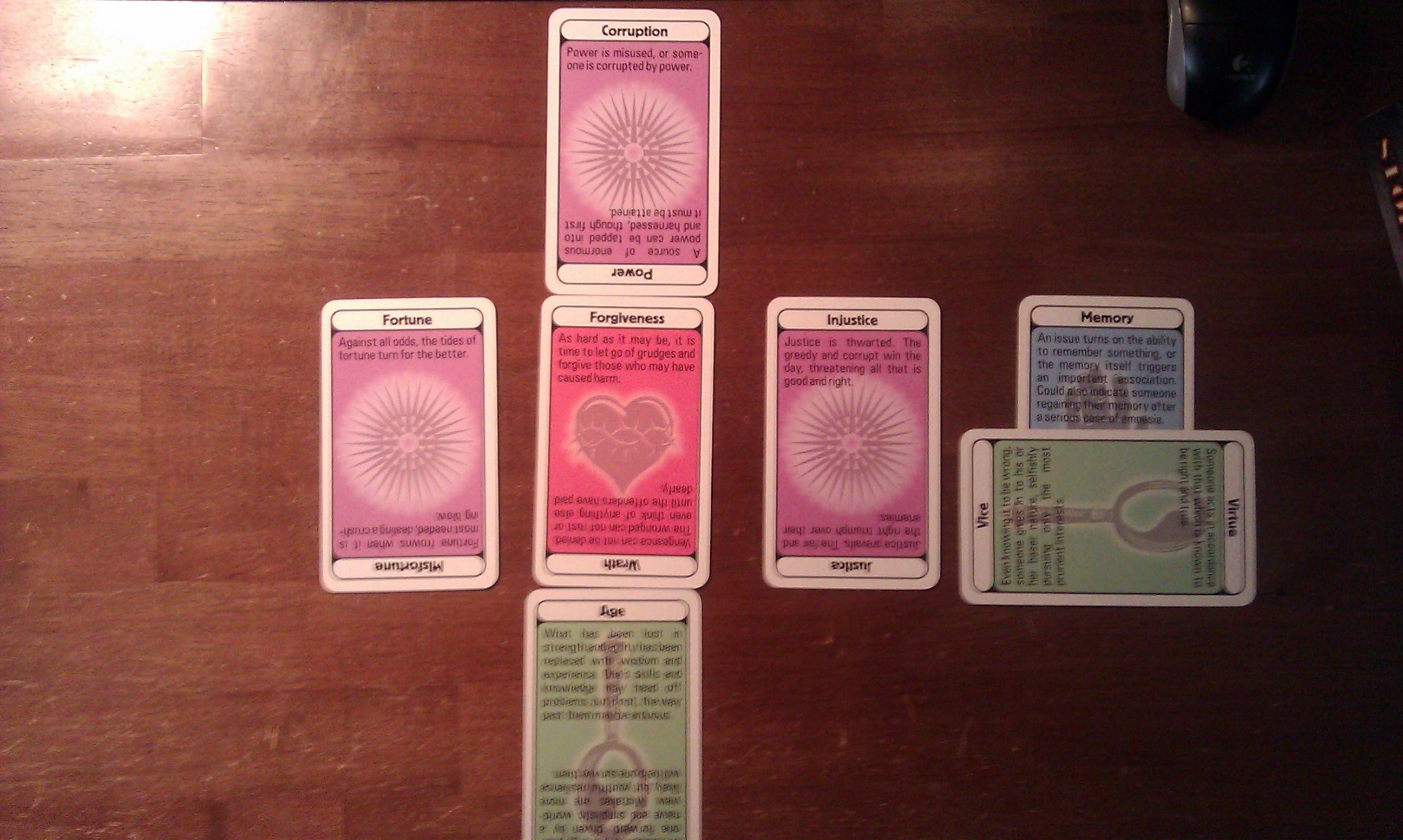 So who is this person?

Scanning over the cards for just a few minutes, some ideas began to form. So I started writing and within 5 minutes I put this together:

Marcus is the son of a Baron and grew up with all the trappings of a noble life (Fortune). His father’s barony was a peaceful land, and justly ruled. As he grew older, it was assumed he would ascend to the throne, but his cousin betrayed their family and seized the throne through treachery (Corruption). Marcus was exiled, while his cousin plunged the barony into dark times as he ruled with an iron fist (Injustice). For years Marcus wandered the far kingdoms, ashamed of all he had lost. He drank, stole, and fought (Vice), squandering his life and his rightful heritage away. He then met his now wife, another exile of his lost kingdom, who’s family suffered under his cousin’s rule. Inside he is ashamed for what he allowed to happen and now wishes to reclaim his father’s kingdom, in part to gain Forgiveness from his wife, by restoring the kingdom to the way he remembered it growing up (Memory). He is concerned, as he is no longer a young man (Age) and waging a war is beyond his years, so he seeks a group of adventurers to help him depose his cousin.

Here is not only an NPC that has some detail to his background, but he comes with a plot hook that would allow me to not only introduce him, but to create a future adventure arc from his background.

That first casting was great, and proved to me that my Kickstarer pledge was well spent. I can see some real power in these cards, as a way to help inspire a GM to come up with ideas. I cannot wait to tinker with these cards some more in the weeks to come.

How about you? Have you ever used a tarot based or other random generator to spark your creativity? Would Story Forge be something that you would use in your game?