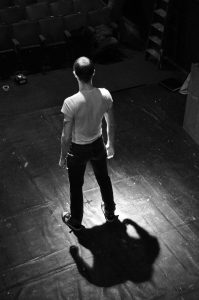 First impressions count. Some research has shown that within milliseconds of observing something or someone, the subconscious has already formed an opinion on whether or not you like what you’re seeing. A bad first impressionÂ isn’t the end of the world, but it does take time and effort to overcome — just ask anyone who’s fumbled a first day on a new job. While most players starting a new game are pretty open to what the GM presents,Â creating a chance for their characters to make a good first impression on everyone else at the table can go a long way to getting your players invested in the game.

As a player, it has always bothered me to have a proper introductory scene for the PCs completely overlooked. Each player may know who their character is, and the GM may have a good understanding of who everyone is, but the characters don’t know each other yet. Too many times to count, I’ve seen players develop an incorrect assumption about another character in the game. It’s very frustrating to have a scene awkwardly stall later on in the game as the player realizes they had the wrong idea about another character. This can be easily avoided by finding a way to introduce each character a little more clearly. Think of a movie or a play — each character gets a moment where they step onto the screen or stage where the audience gets a quick glimpse of who they are. It’s often just a quick scene or a line or two, but it goes a long way to establish that character. Who are the players if not the game’s audience?

There are so many different ways to open a game, but it’s really important to make sure the PCs get a moment to establish themselves. It can be incredibly fun to get a little creative with how you bring the PCs into the game, so have fun with it. For a campaign,Â you’veÂ got a bit more time to set the stage with the PCs, while for a one-shot, you need to get it done in a significantly more limited amount of time.

Each character, even if the playerÂ hasn’tÂ articulated it yet, has a history. That character had a life before the game started, so try giving each player the spotlight with a prologue geared towards their character. This can be aÂ little difficult to pull off in the limited time constraints of a one-shot, but for full campaigns, it can be a dynamic way to kick things off.

If you want to be slightly more ambitious, you can also plan to spend one game session per character on a prologue scene. ThisÂ isn’tÂ something I have attempted yet, but I have played in games that started this way. TheÂ GM gave each character (there were only three of us) a separate session as a prologue where the other players took on the role of NPCs in our backgrounds. A couple of the scenarios were surprisingly intense and gave a real weight to the characters.

Another methodÂ I’veÂ used to good effect is to set the scene and then bring each character in one at a time. Each player gets to describe their character and narrate a little of how they enter the scene. Whether theÂ characters enter the game knowing one another or not, this is a good way to provide a little context for who the character is in a way that lets the other players know who they are.

One convention gameÂ I’veÂ run a few times has all the characters, experienced monster hunters, showing up to the reading of the will of a recently deceased acquaintance that happened to be a (mostly) respected, olderÂ hunter. Each timeÂ I’veÂ run it,Â I’veÂ described the scene and explained who the deceased was and why they are all there. Then I ask who arrives first. Invariably, someone steps forward and they get to describeÂ theirÂ arrival and everyone gets to see their first interactions with the lawyer. Then I bring in the next player and let them do the same while also reminding them of who they may actually know. Wash, rinse, repeat. It has worked really well as a way to set-up the game and establish the personality and relationships of the characters.

Do you have any other methodsÂ you’veÂ used to get a game rolling that gives the players a chance to shine?Â