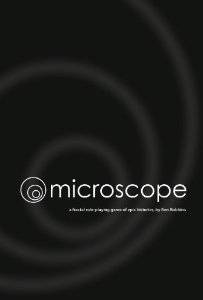 Microscope is a superb game in its own right, and one I recommend without reservation, but it also features two things that you can easily make use of in other games: collaborative setting creation and its yes/no list.

Collaborative setting creation is the point of Microscope; it’s the whole game. When you play Microscope, you build a setting and its history together in a unique and fascinating way. After two sessions, when my group wrapped up a game bracketed by humanity’s first contact with aliens and the extinction of humanity, we all agreed we could play in that setting. If that sounds even remotely interesting, go buy Microscope. You won’t be disappointed.

Technically it’s not called a yes/no list; it’s called a Palette. The basic idea is that before you play everyone gets a chance to insert things into the game world or ban things from it. You can do either (add or ban, say yes or say no) when it’s your “turn,” and if everyone contributes you do another round, then another, until someone doesn’t want to add/ban. When that happens the other players get one final chance to put something on the list and you’re done.

Discussion is encouraged. No one should be unhappy with what goes onto or is removed from the list. There’s some other advice in the book around the Palette, but that’s the concept in a nutshell.

And it just plain works. It’s especially fun to add surprising things or ban expected things, guiding the game — subtly or not — in surprising directions. In our Microscope game we added planet-busting battleships, a menagerie of species (think Star Wars), wormholes that use fixed jump points, and Hollywood science; we banned replicators (think Star Trek), old dead empires, a unified “one world” government on Earth, and AI. Just reading that list tells you a lot about the world and the game, which is the beauty of the list.

Before I knew about Microscope’s list I was stealing a similar technique, Three Things, from the Stew’s own Don Mappin. This equally simple trick involves asking your players for three things they want to see in the game; it’s fundamentally a positive exercise, and it works well. In fact, in that same campaign — a “traditional” (as opposed to “indie”) Star Trek game — I also asked my players if there was anything they didn’t want to see in the game. If I’d known about the list, I’d probably have done it the yes/no way instead, but the end product was similar: a quick, simple collaboration that improved the game.

Based on that experience, on the use of the yes/no list in our Apocalypse World game, and on its use in our Microscope game, I love this technique. It’s not perfect for every game or every group, but its simplicity makes it easy to drift and powerful when applied.