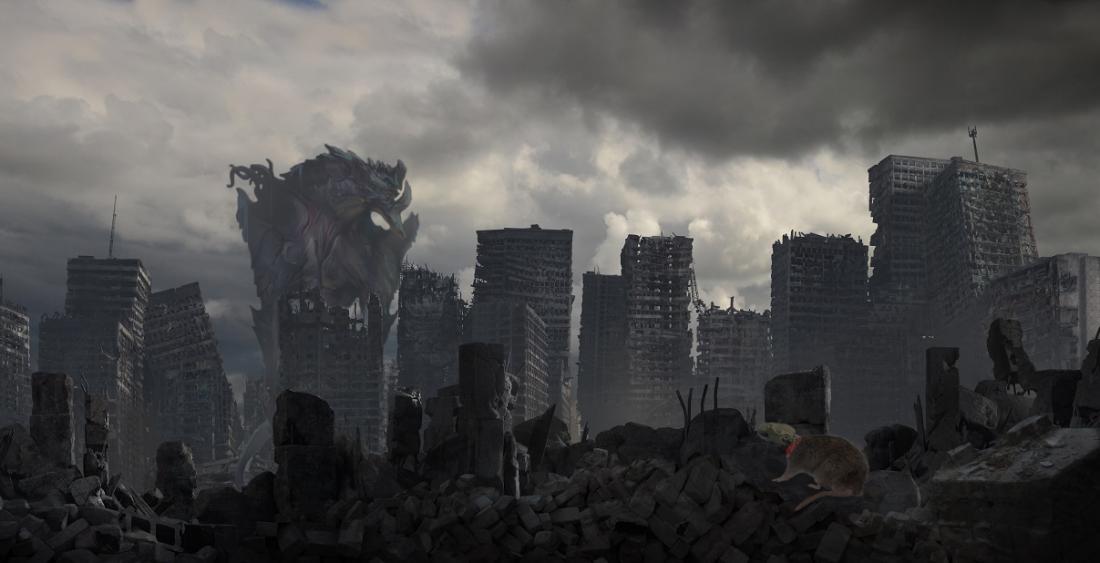 Today, we’ll be visiting a weird variation from a classical “monster” and a colossal titan. The skeletal rats are the undead version of the usual giant rats. These appear pretty much in any game. On the other hand, we’ve got the kyokors, colossal beasts from Starfinder. There’s not much of them to play with, but more than enough to create an interesting story you can steal for your game.

Kyokors are colossal beasts from space that were created with the purpose of destroying populations, standing 150ft tall. They can detect where large conglomerates of people are and go there with the sole purpose of destruction. They have arms that end in jagged claws, excellent to destroy, but not as good to grab things smaller than a boulder. In other words, they were made to destroy. However, notice that I said they are beasts, not constructs. This makes them all the more interesting. Kyokors are living beings engineered for mass destruction (extremely evil). However, little is known of their creators.

Kyokors stand two-legged with long tendrils that can be used to destroy buildings. These at the same time radiate psychic energy that enthralls their victims, leaving them so scared they can’t move. Kyokors have an exoskeleton made out of a weird plate that is almost indestructible. This makes these titans targets of colossi hunters looking to scavenge parts of these beings’ bodies. Last but not least, kyokors can breathe underwater, making them hard to notice if they attack by coming out from it.

As regards skeletal rats, there’s not much to be said about them. They are just undead rats, and not even D&D or Pathfinder have anything interesting to say about them. We could keep the rats as they are, but that would be extremely boring and particularly difficult to use in any way with kyokors. How can we then create an interesting story or combo out of the two of them?

Skeletal rats are just tiny skeletons that come bite the PCs and are destroyed with ease. What if we just used them as templates? They don’t actually need to be skeletal rats but creatures made out of tiny bones. What are they made of then? That’s where it starts to get interesting:

Judging by the size and intelligence, we know it would make sense for the kyokors to be the leaders if both creature groups were working together. Rats are difficult to work with, but undead ones can probably be controlled with ease if you are the one summoning them. What if the kyokors didn’t actually summon them, though?

We know kyokors are civilization-destroying beasts… Pretty much kaiju. What could be more deadly for civilization than a beast capable of creating small deadly and plague-inducing skeletal critters from their body? These bones for the rats could come from the civilians the colossus eats, molded into tiny rat-like beings that attack those who manage to escape the buildings being collapsed by the kyokor, possibly inflicting some kind of disease. Nevertheless, kyokors are beings, not machines, making it difficult for them to be able to create other beings. To fix that, we are going to slightly modify them so they were engineered to create life (or unlife) from what they eat. The rat-like skeletal beings have their bones connected by pulsing meat, blood, and skin and come out from the kyokor’s skin with one objective in mind: destroy life. Yep, the kyokor was built to raise an army with its digestive system.

Rumors have circled of alien life possibly having visited the region we live in, be it the classic flying saucers or described in some other way by a conspiracy theorist. The truth is aliens have already come to our planet thousands of years ago. There is a kyokor, a titan from a time long forgotten, at the bottom of the ocean. Some alien life sent it here, as they saw us as a possible menace. The kyokor is waiting in the depths of the sea, detecting the best moment to destroy civilization, feeling conglomerates of people from a safe distance. The moment an event occurs that joins thousands of people together, the kyokor comes from the water and starts to wreak havoc with its tentacles and claws, killing all people it misses with skeletal rodents made out of fish bones and the civilians it devours on the surface.

This monster combo is set to work in pretty much any RPG that has the PCs deal with an incoming menace. The kyokor inspires people to follow it and look for mankind’s destruction, the countries start wars with each other while the kyokor attacks, seeing the titan in enemy land as an advantage over them. World leaders could start trying to communicate with alien life to put a stop to this menace or send a squad of Men in Black-like soldiers after the kyokor. A Lovecraftian campaign can use the kyokor as an eldritch monster that must be stopped by finding out who awakened it and how. A supers game can try to save as many people as they can from the alien creature while other supervillains use it as a distraction to accomplish their Machiavellian plans. A fantasy or sci-fi game can lean a bit over the unknown and alien by having to seek some prophecy or weapon able to destroy the kyokor’s impenetrable plate. You could even have this creature be in a Mad Max-like world in which you play a group of people looking to gather the plate in its body before it gets close to civilization. All in all, most genres can find some way or another to have this monster combo make sense in the setting!

What do you think of this kyokor + skeletal rats combo? Is there anything you would change about it? Are you looking forward to adding them to your game? If so, what system are you using and how do you intend to have this army appear? Let me know in the comments below!