Are you one of those gaming geeks who loves to mix your RPGs with your technical savvy? Like to have all of your resources available to you from anywhere in the world via the Internet? Do you like loot? Then this review is for you.

EpicWords is a content management system (CMS) designed for GMs and their gaming groups. EpicWords offers both a free account plan and a one year subscription plan for $12 (US). With the free account you can have up to three characters and you can run one campaign as the GM. With the one year subscription plan you can have up to fifteen characters, run ten campaigns as the GM, and you also receive 1GB of online storage space for file uploads. Both plans include access to blogs, wikis, forums, private messaging, and EpicWords’ experience tracking and loot lists tools. All material that is posted can be shared at different levels, such as being made public, shared only within the group, or viewable only by the GM. In essence, EpicWords takes your campaign notes away from the realm of pencil and paper and brings them into the digital medium.

Now that we know what the site does let’s get onto the good stuff. How well does it do these tasks? 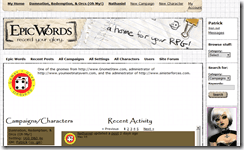 EpicWords has a simple layout with common features such as a search capability to the right of the screen, a dynamic menu that changes depending upon which site feature you are currently using below the title banner, and upon logging in there is a static header menu with your account’s campaigns and some common tasks laid out above the site’s banner. The footer also contains some common links for contacting the site’s staff, site news, and other such features.

Navigating the site was confusing at first because your eye is drawn to the dynamic menu which changes. Your main menu is actually the header menu which is in an awkward location. This is not to say that you cannot navigate the site as all of the features work and I found no broken links.

Yet there is nothing in the site’s design that presents it as an RPG campaign manager site. The theme is pleasant enough, but the doodle and notes upon graph paper is very generic and could be applied to many different sites. Adding some polyhedral dice and other such RPG staples such as a miniature would really add to the flavor of the site design.

Each campaign and each character can have its own blog. While not as powerful as other blogging tools the features provided do get the job done nicely. The forums are also pretty standard features wise, and each campaign has its own dedicated forum which is a nice touch. This way only players who are a part of a particular campaign may post to the associated forum.

This by far was the biggest disappointment for me when using EpicWords. You cannot create links to new material on the fly. This to me is what sets wikis apart from other online tools such as forums and blogs. Yet the wiki engine on EpicWords does not include this standard and defining feature. Sure you can create each page and then insert a hyperlink to it later on, but wikis were created so that you could better organize your material on the fly. The wiki is nothing more than a blog with multiple editors without this feature.

The loot tool is a simple way to keep track of gear within each campaign. It is slanted towards fantasy genre items, but it would not be difficult to use the tool for any genre. A new field for adding item details such as powers and special abilities would be nice.

EpicWords has some great features, but overall it lacks star quality. Using the site I and my group members who helped me test the site for this review felt that the interface and layout was awkward. The site also was a bit slow when we first started to use it, but that has been steadily improving since then.

I’m very torn in reviewing EpicWords. Being an IT person I’ve seen blogs, forums, and wikis done better.Â  The wiki not having an easy method for the creation of new linked material is a serious drawback. Yet you do have access to a lot of features for a dirt cheap price of $12 for a full year. I cannot think of another site that offers as much as EpicWords does for $1 a month.

In the end I give EpicWords a solid “C” as it does many things but none of them amazingly well. Yet the staff was always pleasant when answering my questions, and EpicWords’ custom tools are nicely done. Plus the site is improving and adding new features, such as allowing embedded content from the excellent iplay4e site (another online tool worthy of its own review). So while I might consider EpicWords to be an average site as of today, I believe that it has the potential to ascend to a level more akin to its name.

Are you an EpicWords user, or are you interested in becoming one? Do you agree or disagree with this review? Leave your comments below for others to hear what you think. And remember that the GM is a player too, so have fun with it!