So You Want to GM a Roleplaying-Intensive Game, Part 3 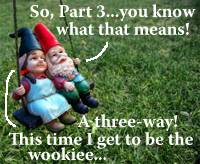 (The first three steps, and my definition of “roleplaying-intensive,” are in Part 1; tips 4-6 are in Part 2.)

7. Make Good on Your Promises

By this point, you’ve made two promises to your players, one explicit and one implicit:

I’ve been guilty of failing to live up to both of these promises in the past — in the same campaign, no less. I asked for lengthy backgrounds and then didn’t use them, and didn’t run the type of game I’d advertised. Instead, I made minimal changes to published adventures and didn’t emphasize roleplaying at all.

So while this step might sound self-evident, don’t overlook it. I didn’t make those mistakes 20 years ago, when I first started GMing — I made them about four years ago. I still feel bad about how poorly I handled that short-lived campaign, and my players rightly still give me shit about it.

My current game — the one that inspired this series of articles — represents a deliberate effort to do the opposite of everything I did four years ago, and to learn from those mistakes. It’s going much, much better because of it, and we’re all having a good time at the table.

I wrote a GMing 142 post defining and exploring spotlight moments, and I won’t retread that ground here. Instead I’ll just mention that one of the most powerful tools you have for continuing the follow-through from step seven is the spotlight moment.

Spotlight moments — scenes where one PC (and by extension, her player) takes center stage — are a great way to showcase the background hooks your players gave you, engage them in intense roleplaying scenes, bring the things that interest them into the game and otherwise make the game as fun as possible for each player.

They’re also one of the most straightforward ways to ensure that you’re running the kind of game you advertised, since sitting down and thinking “How can I create a spotlight moment for this PC?” during prep will force you to consider your campaign’s overarching story, the plot at hand and the strengths, weaknesses and background hooks of the character in question.

You pitched a roleplaying-intensive game. Your players bought into that kind of campaign. You’ve all worked to create a gaming environment where roleplaying is front and center. Your players are into their characters and into the story, roleplaying their asses off.

Want that to keep happening? Reward their roleplaying — and not just “good” roleplaying.

What you define as good roleplaying is probably slightly different than how each of your players would define that concept (although there’s likely to be quite a bit of overlap as well). And that’s just fine. Everyone approaches getting into character differently, and their output tends to come in different forms as well. You’ll know if someone isn’t putting any effort into it, and that’s something you should address with that player (and a topic for a different article).

All of the roleplaying your players do should be rewarded in several ways:

Exceptional roleplaying — which is like pornography: You know it when you see it (or more accurately, when the whole table reacts to it) — should be rewarded in all of these ways as well as in one more way:

What do you do to reward great roleplaying? Have you ever had the kinds of follow-through problems I’ve had? What tricks do you use to get your players riled up and into their characters?

The fourth and final installment in this series will cover three final topics: driftable mechanics (a reader suggestion from Irda Ranger), metagame discussion and evaluating your success. (If I get more reader suggestions, I’ll roll them into that post or do an epilogue.)

4 Responses to So You Want to GM a Roleplaying-Intensive Game, Part 3