So You Want to GM a Roleplaying-Intensive Game, Part 2 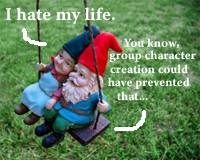 (The first three steps — and my definition of “roleplaying-intensive” — are in the first post in this series.)

Suggested by the Stew’s own Patrick Benson in the comments on the first roleplaying-intensive game post, picking a system that reinforces the kind of game you want to run is critical.

Some games are just better suited to a focus on roleplaying than others — despite all sharing the common term “roleplaying games,” not all RPGs are created equal in this department. The wrinkle is that what works for one group won’t necessarily work for another. For example, I find it harder to really get into the roleplaying side of D&D 3.5e than I do White Wolf’s Storyteller system, because for me transparent mechanics are key. Your experience might be the opposite.

The bottom line is to give the system you’ll be using some thought. No matter what system you use, the steps in these posts will help you foster a roleplaying-intensive atmosphere.

Experience has taught me that there are three keys to a good character background:

Note what’s missing from that list: level of detail. Some players love writing 10-page backgrounds; others prefer to sketch in a few details and develop the rest during play. Both approaches are fine, and you should let your players do what works best for them — except for one thing: hooks.

From a GM’s perspective, an awesome PC background is one that gives you tons of stuff you can use to tie the character — and thereby the player — to the game world, to generate adventure ideas and to enrich the roleplaying aspects of the game. There’s just no substitute for great hooks.

I’ve had good luck asking for a couple of specific things, like two or three living NPCs (friends, relatives, enemies, etc.), what your character did during a major pre-campaign event (like a war), etc. That lets my players spend as much or as little time on their backgrounds as they like, but guarantees that I’ll have material to work with. (For more details on this approach, check out PC Backgrounds: Pressure Doesn’t Make Diamonds.)

When it comes to running a roleplaying-intensive game, the single most powerful weapon in your arsenal is the group character creation session.

By sitting down as a group to talk about character concepts, share ideas and brainstorm together, you accomplish several things:

You don’t have to actually create complete, fully-developed characters at a group character creation session, odd as that might sound. As long as you end the night with everyone reasonably sure what they’re going to play — and what everyone else is going to play, too — you’ll be in good shape.

I wrote a free PDF for Treasure Tables all about this step: More is Better: Group Character Creation. It pulls together everything I know about making this approach work for your game, and just like all of the steps in this post series, it’s worked well for me.

That’s it for Part 2! Parts 3 and 4 will cover spotlight moments, metagame discussion, rewarding roleplaying and making good on your promises, as well as a reader suggestion from Irda Ranger: driftable mechanics.

How important is choosing the right game to you? Do you have any tricks for making sure you have great character backgrounds to work with? Do you have players who absolutely hate writing PC backgrounds at all?

13 Responses to So You Want to GM a Roleplaying-Intensive Game, Part 2