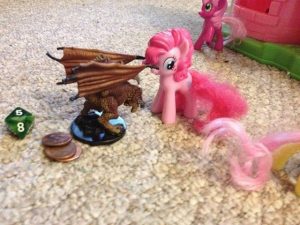 I have a five-year old daughter, so I’ve watched far more My Little Pony: Friendship is Magic in the past two years or so than I would have thought possible. (Go ahead, ask me anything. I’m a font of pony trivia!)

Unlike some of the other shows she enjoys — Bratz, for example, sends me running from the room faster than Real Housewives of Fuck You Die in a Fire — this is one I enjoy watching with her. The characters are fun, the animation is solid, and I like the focus of the stories (friendship) and the morals it emphasizes (sticking together, forgiveness, putting friends and family first, and the like).

So: ponies; RPGs; connecting these two things indirectly. (You can connect them directly, too, and lots of gamers have, but that’s not my focus here.)

Conveniently for our purposes, one of MLP’s merits is that the plots are more or less RPG adventures waiting to happen. Even more conveniently, here we are on the internet — plot summaries for every episode are available for free: Look, here are 90+ adventure outlines. [1]

Let’s grab one at random as a proof of concept: The Cutie Pox [2] (season 2, episode 6). I bet you’ve already got an idea for an adventure just based on the title, don’t you?

The episode centers around the titular illness that afflicts Apple Bloom, which causes many cutie marks to appear all over her body, making her constantly utilize the skills they symbolize.

You have to squint a bit when you read the rest, as most of the wiki page is a blow-by-blow retelling of the episode, and that’s not terribly useful as an adventure outline. What is useful is the skeleton:

That’s five scenes right there (plus some “connective tissue” between them), which in my experience is a good number to shoot for when trying to fill an evening/convention slot.

Here’s that skeleton re-skinned as an RPG adventure (in my head, for a fantasy game — but squint a little harder and it could work in other kinds of game, too):

Boom! Instant adventure. It’s not Shakespeare, but through the alchemy of roleplaying — i.e., introducing your players, the universe’s greatest agents of chaos (on the show, that’s Discord, the dragon voiced by John de Lancie, aka Q . . . ahem), into what you have planned for the evening — not-Shakespeare tends to work just fine.

You can keep or discard the whimsy of the ponies, and the moral (patience), as you see fit — notice that neither my “summary skeleton” nor my adventure have anything to do with ponies.

If you want visuals, which can be a great way to get more specific ideas — again, even disconnecting those ideas from MLP — you can always watch the episode. MLP episodes are short (22 minutes or so, without commercials), they move fast, and they’re available on Netflix. (Probably elsewhere, too, but that’s where we watch them.) I’d run my based-on-The-Cutie-Pox adventure with a lighthearted tone, and the episode itself is full of fun touches that could be repurposed to drive that home in the game.

Moving quickly is a big part of what makes MLP episodes well-suited to gaming. Ditto with being self-contained, which most of them are. You don’t need to be a certified Pony Trivia Master (9th Dan) like me to pick up the thread, or even understand the plot summaries. The building blocks tend to be simple, in a good way, and also quirky; for gaming, quirky is good.

Go ahead, try it: Hit the wiki [1], roll a d100, read the summary the dice gods chose for you, and spend no more than 3-5 minutes turning it into an adventure. Massage it until it fits into your campaign, and presto: Your players won’t even know they just played a My Little Pony episode!