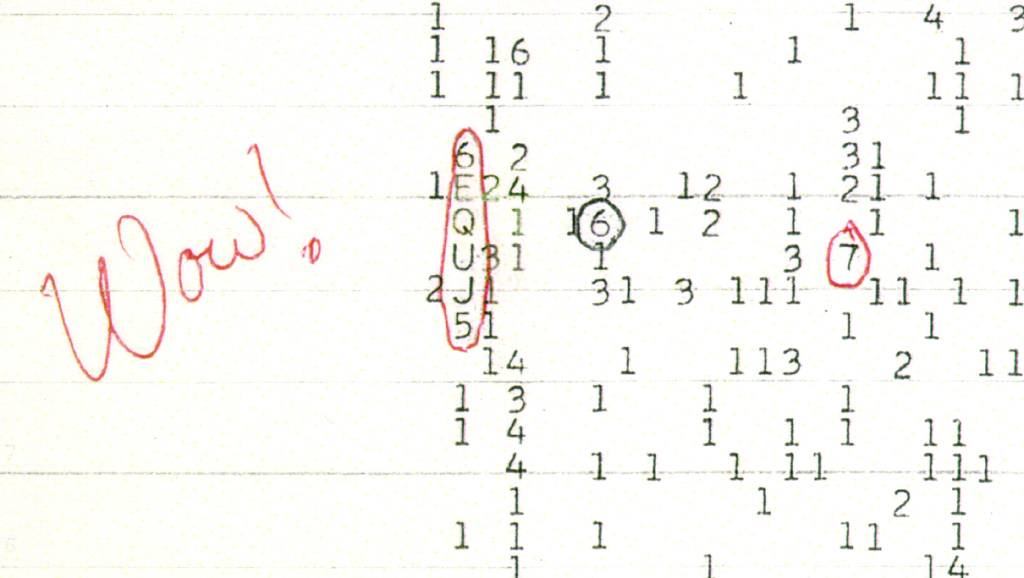 The fabled Wow! signal, the strongest radio signal from space that may reveal an alien presence…

While over at the house of my friend and fellow game writer and gnome, Tracy Barnett, I recently found my eyes wandering to his map of “haunted” locations in Ohio. He had picked up the map as a resource so that he could travel to different locations near him as weekend trips and see different places that were haunted or the sources of urban legends. Looking at that map planted a seed in my brain for a gaming concept – using Google to blow your players minds.

I’m a big fan of running modern day or recent time period games so that I can use real world locations or areas that are familiar to my players. I ran an epic game of Vampire the Masquerade set in 1920s Akron, Ohio when I was living there. All of my players knew the terrain and histories, and a similar map of 1937 Akron from the Akron Road Tourists club allowed us to get a little bit of historical accuracy as the players vied for control of the rubber city. I’m notebook sketching the idea for a modern supernatural game set in my current hometown of Columbus, Ohio, and while I was at a party at Tracy’s and kept looking back at that map, I realized I had an epic tool at my disposal – Google.

So, how can you use Google to blow your players minds? Well, this is primarily of use to a modern themed or historical game, but whenever you are asked a question about something you don’t know, like “What movie was that person in?”, what do you do? You put it into Google or Duck Duck Go (Yahoo? Bing? What the heck are those?). When we run modern games, we have to assume that the characters our players are playing have access to, and have been conditioned to use, the same tools we ourselves would use to gather information. So, with a little planning, when you players perform a gather information roll or attempt to find something out, you can say “What comes up when you Google it?”

The “Prestige” Part of the Trick

If we’re using the metaphor from the movie, the Prestige (Google it) of magic tricks, when you ask your players to Google something, they are going to look at you a little quizzically. Did the Game Master really just ask them to get out their real life phones and Google aliens in central Ohio? Yes, they did. And if they Googled it, they might come up with this article from NPR from 2010 that talks about a strange signal found at the 1420mhz frequency by researchers from Ohio state in 1977. If they are trying to figure out why WOW! was written on a piece of paper you gave them with a street address after they just chased a person in a rubber mask that they believed to be a “grey” alien, and you tell them to Google it, they might come up with that article or more information about the “Wow!” signal found in space. This might lead them to the realization that 1420mhz is a frequency they should monitor which might lead them to being able to eavesdrop on the enemies they are pursuing, the ones they suspect of extraterrestrial origins.

Setting up the “Turn” and the “Pledge”

Following on with the metaphor from The Prestige, using a modern search engine or information resource in your game to great effect requires setting up the “Prestige” part where they search it out and find something relevant. To make this work, you have to search it out yourself first. If you know that your modern day game is going to focus on some element, like haunted houses in Cleveland, Ohio, then you should Google various search terms and find out what comes up. Once you have an idea that you might be focusing on something like Franklin Castle, and you have an idea of what kind of resources the players will turn up with a search, you can set up the “Pledge”. The Pledge, in this case, is whatever clue leads them to the “Turn”, which is where you tell them to take 10 minutes and Google it as if they really were in an episode of Supernatural and were researching something out of the ordinary. In the case of our Alien signal, it would be including the piece of paper that says Wow! and the words Ohio State Signal. They might come across a recording of it, an article describing what some currently believe it is, and the Wikipedia article on it, among other things.Â  After Googling it, they will be full of ideas, ones that may match in line with things you have already thought of and are ready for, because you have already Googled it. Better than that, the players will be excited because learning something new triggers endorphins and that will build up excitement in the players.

Doing a little pre-Googling, of the sort you are likely to do for prep in a modern game anyways, and then building in a “Pledge” that gets your players to duplicate your Googling efforts and find relevant data, will make them feel a deeper connection to the game world. It will evoke a feeling that more of it is spilling over into real life, since they were just on their phones and found some actual, relevant, data. If you want to take it a step further, build a small website or hosted blog (Tumblr, WordPress.com, Blogger, etc) that has some game relevant information and would trigger with specific search terms. Something like a reporter researching a company in your game world but having the story shuttered and having to publish it on their own blog. Setting it up a week or so in advance and knowing that “Verana Company Corruption Vampire” will trigger it. It will have to be specific enough, as Google ranking is very hard to acquire, but the correct search term that is discrete enough will make your players gasp, since the Verana company does not actually exist in the real world . . . does it?