Shadows of Esteren Review: Part 1 – The World of Tri-Kazel

As part of the You Pick It…I Review ItÂ for this year, you requested that I review Shadows of Esteren. As you commanded I have obeyed, and have been hard at work reading this tome. After reaching a certain point in the book, I decided to break this review into two parts. So today’s article is a review of the Shadows of EsterenÂ setting: Tri-Kazel. A few weeks from now, I will return with the second part: the review of the game mechanics. 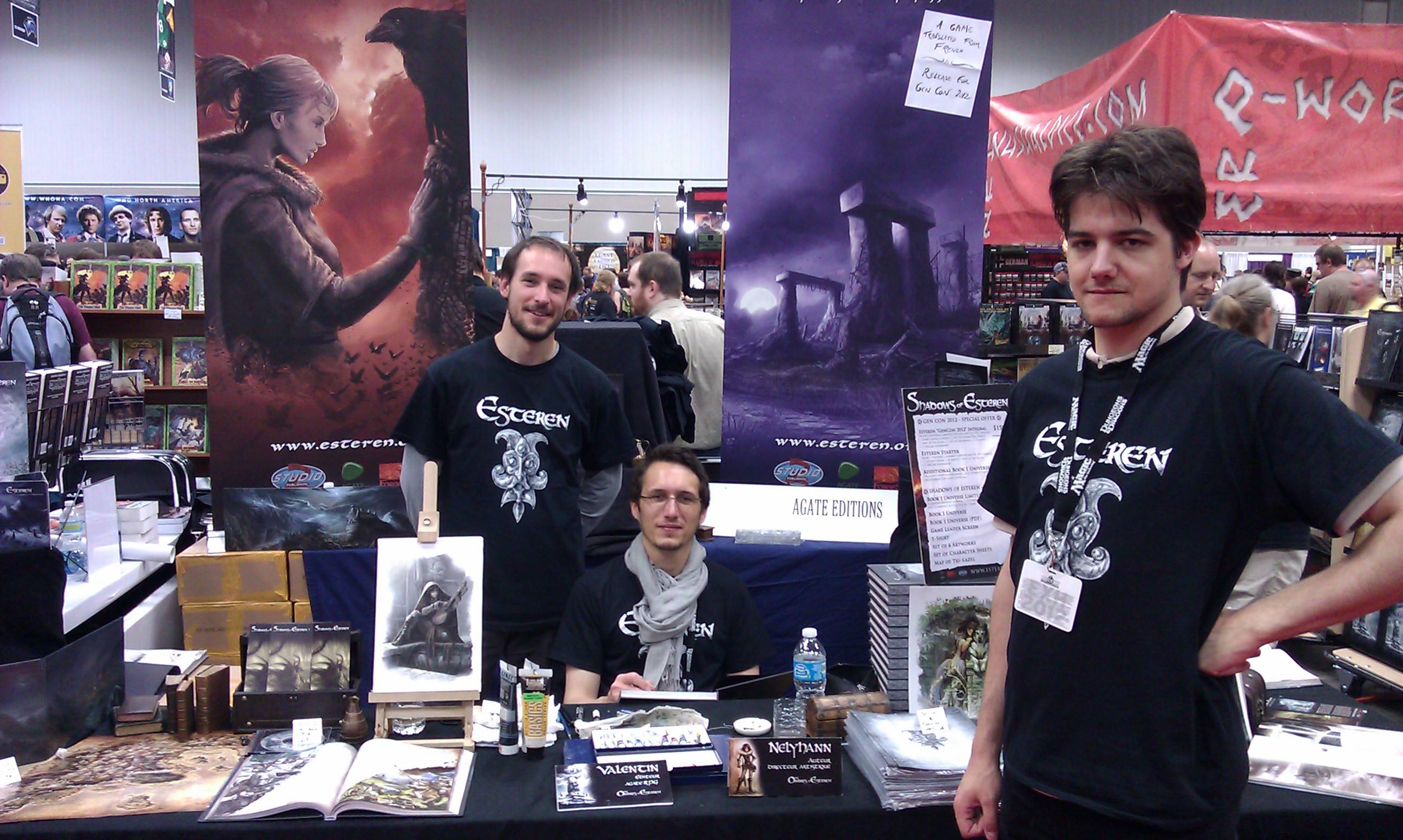 Shadows of Esteren was an RPG originally developed in France, and was only recently translated into English. Thanks to Studio 2 Publishing, I was fortunate enough to meet up with the Shadows of Esteren crew at Gen Con and they were kind enough to provide me with a copy of the book, some character sheets, and a map of the world.

The Shadows of Esteren (SoE) is a 290 page hardcover book, in full color. The artwork is a mix of half-page and quarter page images. There are also borders and watermarked textures on all the pages. In terms of artwork, the quality is on par with any large publishing house, and fitting for the setting. The artwork is often laid out in a way that looks like the pages are ripped, revealing the images. Sometimes the flow of text in these areas can be a bit narrow, but it did not put me off while reading it.

This book was translated from French into English, and I have to say that the translation is solid. I am not an Editor or Proofreader, but in my reading of the text, I only found two grammatical errors. Overall the book reads well and does not feel like you are reading a translation.

SoE has only four large chapters, each broken up into smaller un-numbered sub-chapters and sections. The first three chapters: Tri-Kazel, Lifestyle, and Factions cover 173 of the 290 pages, and describe the setting. The fourth chapter, Game System, covers how the game is played.

The writers of the book keep these sections separate, meaning there are no mechanics whatsoever in the first three chapters. These chapters are also written as a collection of letters and reports made to aÂ noble.Â  These sections are enjoyable, and they read like a travel gazetteer.

It is not until Chapter Four that you learn about the mechanics of the game. The writing in chapter four is much more technical in its presentation, and has very few cultural references, as they were covered in the previous chapters.

Shadows of Esteren is a low-fantasy world that contains elements of horror. The game is focused on Tri-Kazel, an isolated peninsula that is made up of three kingdoms: Taol-Kaer, Reizh, and Gwidre. Outside the peninsula is somewhat of a mystery, for sea travel is too dangerous for anyone to attempt, and the mountains to the north are too treacherous to cross. There have been immigrants to come from the main continent, but they have now been integrated into society. This isolated environment allows the authors to focus deeply on the three kingdoms. Though isolated, there is no lack of adventure that can be found in Tri-Kazel.

While Tri-Kazel is a low fantasy world, there is some magic in the form of the druidic traditions of the Demorthen and the more industrial and arcane Magientists. There are no fantasy races, but there are monsters in the form of the Feondas, which have less to do with typical fantasy monsters and more to do with creatures of the Mythos.

The kingdoms in Tri-Kazel are somewhat iconic, each representing one of the major factions of the world. Taol-Kaer is the kingdom of the Demorthen and represents the most traditional of three kingdoms. Reizh is the magically industrialized kingdom of the Magientists. Gwidre is a kingdom controlled by The Temple of the one Prophet.

The three kingdoms are tied to each other through a common history, but drifted apart when immigrants from the mysterious Continent arrived bringing Magience and the religion of the One Prophet. In time Gwidre andÂ ReizhÂ began to transform, while Taol-Kaer has held on to its historical roots. This relationship creates a tension between the kingdoms without allowing it to devolve into total war.

The writers do a very good job of depicting each kingdom, giving an overview of the land, its history, and its government, as well as a description of one of the major cities. While each kingdom is very iconic, the writers are careful to describe that not everyone in a kingdom is a stereotype. You will find followers of the Demorthen inÂ ReizhÂ  and some Magience in Taol-Kaer. Gwidre has some diversity, but is a bit more fanatical.

From a GM’s point of view the land of Tri-Kazel is a land that is pregnant with stories. The sections about each kingdom are made to inspire. There are locations, events, organizations, and individuals that are described enough to understand, but left open enough to draw in the imagination of the GM.

173 pages is a lot of space to talk about a game world, and the writers of SoE do not disappoint. The three main chapters create a large survey of the world of Tri-Kazel. It starts with a history of the peninsula and an overview of the lands. There is a great two page map of Tri-Kazel, which is also available as a separate poster.

From there, every aspect of Tri-Kazel is covered. The first chapter covers the major parts of the world, including the above mentioned Kingdoms, with enough detail to understand each one. The mysterious monsters, the Feondas, are discussed as well.

In the second chapter, there are sections that cover: habits and customs, handicrafts, food, architecture, various groups, currency, and the arts. The third chapter focuses in on the major factions: The Demorthen, The Temple, and the Magientists. The chapter concludes with a section of rumors.

There is a lot of detail covering Tri-Kazel, but the authors have done an excellent job balancing the breadth of topics without overdosing the reader with depth of detail. Each section contains enough information for a GM or player to understand the various components of the world, while still leaving ample room for a GM to interpret and create within those areas.

After finishing the first three chapters of the SoE, I felt as comfortable with Tri-Kazel as I did the first time I finished reading The Eberron Campaign Setting.

So is Tri-Kazel a land that I could run a game within? Without a doubt. This is a land that has a real tactile quality; you can feel this world as you read. After reading the first three chapters, I have an understanding of all the major details of the world. There is so much potential within the tension of the three Kingdoms, the three major powers, and the mysteries within the setting that there is an abundance of potential stories for any GM to tell.

If you like lower fantasy settings that are gritty and mysterious, you will find this setting compelling. The writing and the artwork blend together to create a world that is on par with any of the world settings of any major RPG company.

My next Shadows of Esteren review will focus on the game mechanics, and if my timing works out, some actual play. Also, I will be taking some time to interview some of the SoE designers to learn about how SoE came to be, how it came to the US, and what fans of SoE can expect in the coming year.

7 Responses to Shadows of Esteren Review: Part 1 – The World of Tri-Kazel