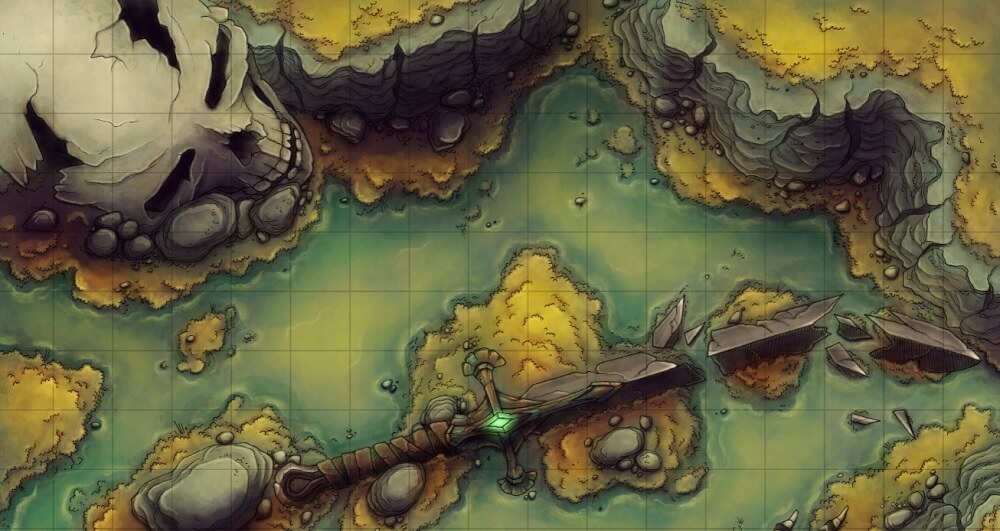 If you’re like most people, you’re capable of effectively keeping track of seven plus or minus two “things” at a time. This phenomenon is sometimes called “the magical number seven plus or minus two.” We can remember and juggle around seven pieces of information–numbers, words, names–and use them without too much effort. Much more than seven, and we start to lose track, dropping details and never quite picking them back up.

These “things” are chunked together in our minds in ways that make them meaningful as a unit to us, so we can remember a “cat” as “that furry thing that keeps knocking my coffee off of the table” (one “unit” of information) rather than as a collection of cat-like traits, with each trait being its own “unit”.

It’s tempting to think of maps as suitable only for huge set-piece battles and aggressively tactical games that linger over detailed rulings on range and movement. There’s nothing wrong with that, but having a physical representation of characters and objects in space is useful for so much more than just dungeon crawls and skirmish games. So with that in mind, here are seven (plus or minus two) reasons why you may want to inject some more maps into your game.

1. Because your players might “chunk” information differently than you do

I’m really, really bad about getting lost when I go places. Not “loses track of routes after two or three turns” bad at directions, but “ends up in the wrong ZIP code” bad. “Donner Party” bad. While I haven’t yet had to eat any of my passengers, I wouldn’t recommend myself as a partner for a road trip through any place that has bad GPS reception or barbecue restaurants with lax supply standards.

For me, even the most basic directions are not a matter of “remember this distinct route,” but a string of relationships that require all of my attention to manage. Directions that would be a single “chunk” of information for many (maybe most) drivers instead require all of my memory to keep straight.

Your players may be having a similar problem when it comes to imagining the situations their characters are in. This isn’t necessarily just the case with battles, either. Relative positioning matters in games for everything from picking pockets to genteel but vicious cocktail parties. For some people, keeping track of where all the moving pieces are while also keeping track of the board they’re moving on is a really difficult task.

Players who are spending all of their mental energy trying to juggle what is going on in the room aren’t concentrating on adding to the game; they’re struggling just to keep up with what’s already there. A map–even a simple one–provides an easy reference for everyone at the table.

2. Because maps don’t need to be a big deal

To expand on the pickpocketing example, a “map” can be something as simple as setting up a handful of coins to represent where the party leader is standing while they distract the guard, where the guard is, and where the party thief is sneaking from to try to snag the key to the cell your bard is being held in after yet another disastrous liaison.

If you’re feeling ambitious, you can sketch out a couple of lines to represent the alleyway where all of this is taking place in case the thief wants to take the roof approach. It takes seconds to draw two lines and set down three coins, but it saves time, frustration, and confusion when the dice start rolling.

3. Because it helps clarify the confusing

Your players only have the information you give them, and as anyone who has ever tried to give instructions can tell you, there are a lot of wrong ways to interpret a sentence. For instance, take the statement “there are two goblins in the corner of this room.” The GM could mean to communicate this (goblins in green):

Meanwhile, the players are imagining this:

These are two very different configurations, and the difference between them becomes very important when the party wizard says those three words every GM longs to hear:

4. Because creating stuff is fun

Tabletop RPGs throw a pretty long shadow–almost any skill you can think of has a place somewhere in it.

Tabletop RPGs throw a pretty long shadow–almost any skill you can think of has a place somewhere in it.Â

If you like woodworking, your table is likely to have some pretty neat wooden props. If you’re a writer, your game’s fiction (or your characters’ backstories) are likely to be deeper and richer for it. Even folks who do statistics for fun add to our games in ways that someone without those skills or interests couldn’t.

Maps, like props or probability curves, are a way to bring your creativity and valued skills to the table–it doesn’t take being a cartographer or an artist to add to the game, but more than a few times, making maps for games has awakened an interest in art or cartography.

5. Because it encourages players to engage the details of the environment

There are probably people out there who really enjoy listening to the GM recite lengthy, detailed descriptions of everything in a room from lighting placement to the number and types of pieces of furniture. I have never met any of these people, and I’m not entirely sure I could stay awake in their games.

Practically, there’s a limit to the number of things in the environment that are available for players to remember their characters can interact with (that limit is probably right around seven). But with the details that come with even a simple map, that list expands dramatically, limited only by the detail that the GM or players are willing to add. Tables exist to be flipped over, cupboards are filled with cutlery for hurling, and windows provide curtains for swashbuckling swings. The map provides a concrete reminder of the availability of those things, and prompts players and GMs to use them. 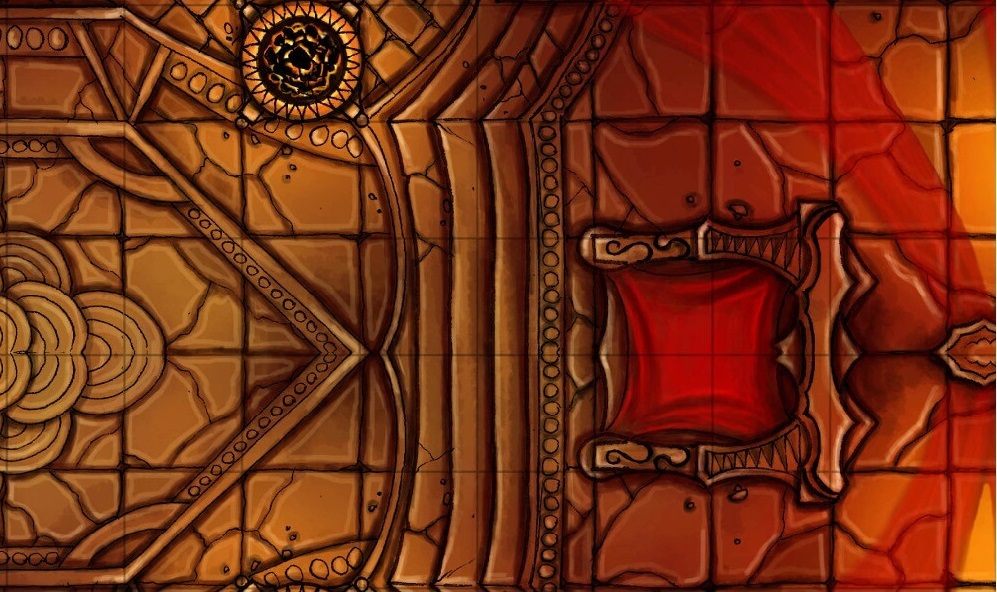 6. Because it improves immersion

Theater of the mind is wonderful. I don’t want to downplay it or say that it doesn’t have its place, but not everyone has the creativity or attention necessary to see a masterpiece in every blank canvas. Having details available for players to look at and think about when the GM isn’t directly talking to them invites players to speculate about (and add to) the world that the GM is building, rather than letting their attention wander.

7. Because it encourages the GM and players to add and flesh out detail they may otherwise miss

Drawing boxes for rooms is quick, but boring. Â With a few extra seconds, GMs can look at a room and think about details that a verbal description could easily gloss over. Does the room have a door (probably)? What about windows (sure)? A spike-lined pit full of snakes (always)?Â

With a few extra seconds, GMs can look at a room and think about details that a verbal description could easily gloss over. Does the room have a door (probably)? What about windows (sure)? A spike-lined pit full of snakes (always)?Â

By seeing all the elements of a room at once, the places where more can be added become more apparent. Even better, it encourages players to add their own flourishes to the imaginary space where the game is taking place.

When players ask “is there a campfire?” if you place a coin or a die or even a piece of pocket lint to represent that fire, it becomes a persistent detail that otherwise may not have existed, and that adds to the options players have to interact with the world, improving gameplay and verisimilitude.

7+1: There are a lot of cool maps already out there, many of them free

If you’re into quickly providing lots of detail for your players to engage with in your games, there are a lot of maps already out there, ranging from the expensive but awesome, like map packs/tiles put out by Paizo and Wizards of the Coast, to cheap or free options on Patreon or DeviantArt. If you have access to a printer, you can print out and tape even the free options together to add a “wow factor” to any game. Building up a library of these gives you the option of flexibility when your players go in an unexpected direction, and provides inspiration when you’re brainstorming session ideas.

7+2: There are great tabletop crafting and mapping communities out there

There are large communities of people who make maps for fun, sometimes using specialized software and sometimes using more standard office products. If you find yourself going down a deeper rabbit hole than you expected, there’s a whole world of tabletop crafting out there. Some crafters make entire cities out of foam and paint; others use 3D printing, and at least one designer is making animated maps for display on TV screens. Here are few resources to get you started.

Maps aren’t all gridded excuses for arguments about bonus actions and five-foot steps; they can serve a variety of purposes: enriching the game world and providing clarity so that all players are operating with the same set of assumptions being only two. As a player and as a GM, I find that having visual references greatly improves the experience of everyone involved, but I’m interested to hear if your groups have a different perspective. What do you think; do maps have a place at your table?