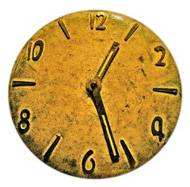 I’m not a big fan of game prep [1], and one of the reasons why is because I have trouble guessing how long it’s going to take me. My personal Achilles heel is maps: I enjoy making maps, so I tend to get carried away (this is true for tactical maps as well as regional maps).

After two or three hours of work, I find that I’ve created one pretty nifty map for one section of the adventure…and nothing else. The real kick in the teeth, of course, is when I also guess wrong about my players going to the site of that map, and we don’t wind up using my three hours of mapmaking at all.

The best solution I’ve been able to come up with is to set a time limit for map creation. This helps me out for two reasons: it ensures that after the time is up, I move on to something else; and because I don’t want to run out of time without having finished a map, it forces me to create maps differently — sketching everything in first, for instance, so that even if I do run out of time I’ll still have a usable map for the session.

Your prep time sink might not be mapping, of course, but the principle should apply fairly well to other game prep tasks.

(I’m out of town on business from Tuesday, August 7th through Friday, August 10th, and I most likely won’t be able to check in while I’m away. There’ll be a new post every day, as always, and I’ll catch up on comments and the forums when I get back. See you in a few days! — Martin)

Comments Disabled To "Set a Time Limit for Prep Tasks"

“I also guess wrong about my players going to the site of that map, and we don’t wind up using my three hours of mapmaking at all.”

My players catch me on this all the time. They are used to me being an improv heavy GM, so when I take time to prep something indepth and they don’t go that way, I get a little annoyed, get over it, and move on with something else. They are never afraid to go off the trail, which I’m glad for. I’ve come to love improv easy tools though. Lists of names, groups of NPCS, ratings that make it easy for me to cobble stuff together on the fly.

The biggest tool I use with mapmaking though is a sharpie marker and a slew of scrap paper. If I have to draw a map for something, I draw it out as best as I’m able (at least enough to give a tactical impression of the area) and go from there. Doing it on scrap paper means that I get to save it for later just in case, or produce a bigger version of it for next session if it becomes important.

Glad to hear I’m not the only “improv heavy GM”. =P

> The real kick in the teeth, of course, is when I also guess wrong about my players going to the site of that map, and we don’t wind up using my three hours of mapmaking at all.

Who says? It seems to me that, if your players are wont to head off to *places* they feel like, you shouldn’t be putting so much prep work into specific places.

Instead, key your maps (or descriptions, or other prep work) to *scenes*. That way, the “big temple where I want a showdown” or the “town quarter that has trouble around every corner”, or whatever, appears exactly where it’s appropriate, no matter which direction the PCs head.

Keep on making your maps; just make sure they’re relocatable such that you have a good selection ready for wherever the PCs happen to go.

Is this railroading? Too bad. Your players can’t have it both ways: either they want to be able to go wherever they like, in which case they should be prepared for the interesting prepared stuff to just happen to be wherever they go; or they want the locations to stay put, in which case they can only reasonably expect interesting things to happen in the finite number of places you’ve already prepared for.

The former makes for an more reliably interesting sotry with the *illusion* of PC choice, so it’s the one my group prefers.

That can work. Sometimes. For some groups of players. I hear some anger in your post, and I have certainly felt that anger in the past.

The problem with the “illusion” is that you risk making the players decisions meaningless.

Now that isn’t to say that you can never “direct” players to your prepared material. In the days of old school dungeons, the players never complained (or never complained much) that they didn’t have a choice as to which dungeon to go to. What was important was that they DID have choices within the dungeon.

You can also improve the likelyhood of the players exploring a particular place by ending a session with some discussion of the next session.

Now you do raise a valid point. The GM doesn’t have infinite prep time. Therefore, if the game is something that requires prep, then the GM does have to put some constraints on the game such that the prep is by and large useable. The trick is to make sure the constraints do not strangle the player’s ability to make meaningfull choices.

I think it’s also important to not overprep. Some GMs will prepare speaches for their NPCs. Other’s will lay out the exact steps the villain will take (necessitating “saving” the BBEG from defeat in an early encounter so his plan can continue).

Dogs in the Vinyard has a good model for how to prep just the right amount. The town creation system guides the GM to creating a situation that is already established (though sometimes for drama, the GM can slip the last couple of events into play instead of have them have occurred just before play starts). The situation is pregnant with opportunity for the players to judge. And the NPCs are prepped, not with speaches or future actions, but desires. Desires that will clash. Desires that the PCs might or might not want to satisfy, perhaps desires that some PCs want to satisfy and others don’t. The result is that the players choices about their PCs actions are certain to be meaningfull, and even if the players fail to win a conflict or two or three, the whole town will still be meaningfull.

Old school dungeons were also good models of prep. First off, the prep was actually pretty minimal, with rooms being listed as having “3 orcs.” Second, the map allowed choices, but also constrained the players. Because the goal of the game was clear, the players didn’t have to buck the prep, yet the game was always open to players trying wild ideas (which sometimes would work). It’s only when players started to demand their character’s have detailed backgrounds and goals outside the treasure that the game started to fall apart. Suddenly, the situation is a dungeon full of treasure and things to kill, but the players don’t want that. They also start to question the logicalness of the dungeon.

And how games stepped on from that was to throw the doors wide open. The GM would create a world, and the players could go anywhere in that world and do anything. Of course the GM quickly realized there was no way he could ensure that anywhere the players chose to go that there would be something interesting going on. And so GMs started to find tricks to force the players to explore the interesting bits.

I generally enjoy prep myself, keeps me away from the tv and other assorted things. What I do with prep is to embelish or expand things around the story or setting or prepare possible future things for the players to have fun (depending on point of view) with.

I also use prep time to read new material for possible inclusion.

> I hear some anger in your post, and I have certainly felt that anger in the past.

Not at all. I’m advocating firmness in realising limitations, and in communicating the realities of limited prep time to players.

Sometimes, we GMs get so caught up in trying to please our players that we lose the ability to point out the impossible where it may not be obvious to them.

> And so GMs started to find tricks to force the players to explore the interesting bits.

I find that’s exactly the wrong emphasis. Instead, my experience is that both GM and players are better satisfied if the GM makes the interesting bits portable. The players get to follow their nose, within reason; and the GM gets to present their prepared conflicts and situations, wherever it is the player characters show up.

If any of that comes to the point where it’s “forcing” the players to do anything, instead of shaping the world to follow them, the GM is focusing too much on the world as a perfect diamond or scripted story, instead of a source of material to respond to whatever unpredictable choices the players make.

(bignose) It seems to me that, if your players are wont to head off to *places* they feel like, you shouldn’t be putting so much prep work into specific places.

Yep, this is definitely one of my weak points as a GM. The last campaign where I ran into this map issue more than once, I was trying to avoid railroading. My perspective has changed since then, and I’ve definitely seen the wisdom of both ensuring that the PCs go to cool places for planned encounters and planning only stuff I can actually use.

[…] overlooked) stage of the process, or that I drill down to this stage on a couple of prep elements (maps, for example) but skip the stuff I really shouldn’t skip for all the other […]