I remember the days of sprinting off the school bus to watch anime. I come from the Toonami generation, and that, combined with the influence of my school’s Anime Club, was the gateway drug into serious anime love. Important favorites come to mind- Dragonball, Tenchi Muyo, Gundam Wing… Sailor Moon. Sure, it was all crappy dub at the time, but the important part was that it got me hooked. Before you knew it, I was borrowing manga and subbed anime DVDs left and right. Neon Genesis Evangelion. Fushigi Yuugi. Hana Kimi. Robotech. Gravitation, which naturally fueled my blossoming love for shounen ai manga. Cowboy Bebop. Throughout high school, my interest in anime grew. I became the President of Anime Club after the old ones graduated. My Chemistry and Physics teacher introduced me to the idea of going to local conventions, and I still keep in contact to this day (YOU ROCK, MR. D).

To this day though, Sailor Moon holds a special place in my heart. Magical girl anime in itself is a special thing. The magical girl is allowed to be both feminine and powerful. It’s mostly lighthearted, yet the magical girls of Sailor Moon bear the important burden of responsibility; they’re charged with protecting, well, the world and all the people in it. Also, while they are basically female knights in shining ribbons and tiaras, they are also young girls. Girls who struggle with their grades, girls finding their place among their peers, girls fascinated by boys (I mean, who wasn’t distracted by Tuxedo Mask?), girls who are just growing up but aren’t quite there. There were plenty of silly moments, plenty of moments when I was watching and yelling at the TV like, “Really? Come on! It’s so obvious!” or “Urgh, why aren’t you doing this instead that would make things so much easier–” Ahem. 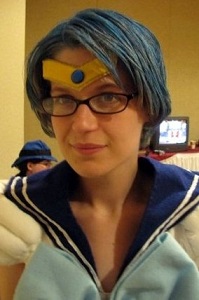 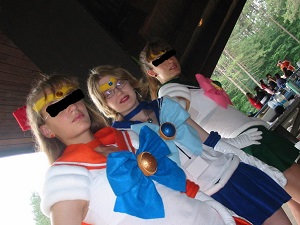 Costumes made by Friend on the Right 😉

So when I heard about Sailor Moon Crystal, I may have squee’d like a giant leaky balloon. I’m not ashamed to admit that. Question is this: Is it any good? Will it appeal to Sailor Moon fans’ sense of nostalgia? Will it be super shiny with fresh new animation? Does the music rock? Is the voice acting good? And the biggest question of all: Will it just be really fun to watch?

If you love Sailor Moon, and this show disappoints you? You, my friend, are one tough cookie. Episode the First was pretty straightforward, but hey, it’s the first episode. Still good.

Second episode really caught my eye. In case you couldn’t tell by the cosplay, Sailor Mercury is one of my favorites! I think it’s because I identified with her a bit. I’m not super genius smart, but I’ve always studied very hard to get (mostly!) good grades. I also have a tendency to be kind of shy, and people who don’t know me very well misinterpret that. When I was a teenager, it was worse, but I make friends much more easily now. That’s why I really feel for Mizuno Ami, who feels so isolated by the start of the episode. You know what helps cure loneliness though, right? Secretly being a magical girl and getting talent scouted by a talking moon cat.

The first interaction between Usagi and Ami is ADORABLE. So much blushing! Usagi’s intentions are, naturally, slightly on the selfish side (teach me to study, genius girl!) but Usagi is also that character who will just walk right up and start making friends. It’s so cute because Ami just… doesn’t expect it. The arcade scene is so good too. Ami is clearly out of her element watching Usagi play the Sailor V game. When Usagi gets her to play though, she completely owns and gets into it, beating the high score. The hug from Usagi makes the moment even more of a victory for Ami. Their budding friendship really takes off from here!

But wait- time for the Crystal Seminar! Because Sailor Moon is very reliable in its predictability, we know that the seminar is just a front for harvesting more tasty human energy. However, doesn’t anyone get a feeling it might also be a metaphor? The “study hard, and you’ll definitely be a doctor” line from our Monster-In-Disguise #2 rings so hollow when the setting is some poorly lit office, a student farm with cubicle cages and the harsh light of the computer screen to read by. The setting, already soul-sucking, kind of makes me think about how, perhaps, sometimes schools are too focused on churning out students, factory-style (not to mention, it is darn expensive for college kids). I dunno, just something that popped into my head while I was watching. I digress.

Next is the part where Usagi and friends start noticing students who go to Crystal Seminar start acting like addicted little zombies. Usagi invites Ami out for ice cream, but even though Ami wants to say yes, the memory of Evil Instructor smacks her with a wave of Roman Catholic-esque levels of guilt, and she reverts to zombie study mode. Look at those dead, cold eyes. I like the comparison between Usagi and Ami though. One extreme and the other- one who basically compulsively studies, and the other who looks for every excuse not to study. Of course, Ami conveniently forgetting to take her Crystal Disk with her to study makes a perfect excuse to REVEAL EVIL. More reliable predictability. Sailor Moon is still really good at telegraphing what it is going to do next. Yet, even though you know what to expect, you still love to watch it. I’d call that a win.

Annnd…Mamoru is still walking around all the time in a tuxedo. “Did your cat just talk?” Yeah, well… are you Tuxedo Mask because you’re always in a tuxedo? I like that the show is playful like that. It points out the obvious to the audience, but meanwhile the characters remain oblivious. It’s fun.

The confrontation with Evil is good. How could I forget about that disguise pen? It’s a great excuse to move the plot along and deal with obstacles like “I’m not supposed to be here, but wait, I have a disguise!” Usagi declares she won’t let this fake teacher take advantage of her friend anymore (as she made this declaration, the academic inside of me who is disappointed with our education system cheered). The transformation of shy genius Mizuno Ami into a confident and powerful Sailor Mercury was very satisfying. As opposed to Sailor Moon’s first transformation when she was bumbling around (you know, like Usagi does), Mercury knows exactly what she’s all about. Tuxedo Mask makes a brief appearance, but he’s not really that necessary this time around. Not necessary (seriously, Moon, it’s paper. Can’t you fight your way through paper?), but Tuxedo Mask is good eye candy.

Overall, Sailor Moon Crystal is just full of sparkly happy so far, so you should enjoy it. Looking forward to episode 3 when it’s free on Crunchyroll in another day…

Until then, let this amuse you: Bizarre Sailor Jojo