Running Combats Without A Game Master 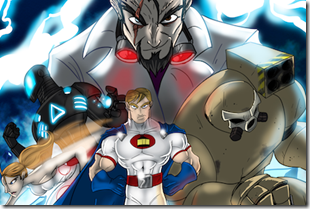 When my gaming group and I see that a game is going to fall through because some people didn’t show or the Game Master wasn’t feeling it that night, we default to a card game called Sentinels Of The Multiverse. One of the biggest draws of this game is that it is cooperative. No one has to run it, the enemies actions are controlled by drawing from a terrain deck and a villain deck, determining what happens and what damage is dealt based on the card drawn. This is great fun and provides an evening of entertainment that has everyone sitting on the same side of the table and cooperatively enjoying a game. It occurred to me recently that the type of combat utilized by this game could be drifted to tabletop role-playing games with some interesting results — combats without the need to ‘run’ them.

There are multiple ways this system could be utilized, and I’ll cover a few possibilities in a minute, but let’s talk about the benefits of running combats without heavy interaction from the Game Master:

John, you say, that all sounds awesome, but how in Baator do we make a combat run without the GM doing it?Â  First off, it will all depend on the game you are running. Setting up a combat to auto-run in anything is going to be different in each system. Savage Worlds is going to run very different than anything using Pathfinder or D&D 4e, and very different with something like Fate. Here are a few general guidelines to follow and a few bare bones systems.

Ok, with some of those guidelines down, let’s talk about actual systems to do this. I would absolutely love to be able to write out a structure for this that works in every system, but I do not have the time to do so or the knowledge of what systems are going to be used with something like this. So, I’ll provide the bare-bones of some systems and let you take it from there. Please feel free to implement this idea and post it anywhere you would like for whatever games you play. With that said, on to the systems.

Option 1 – Write It Up Beforehand 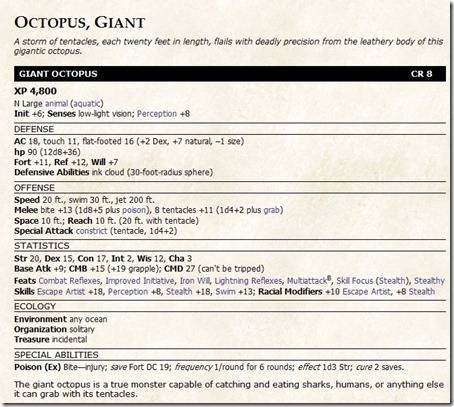 One option for running a combat without much Game Master intervention is to look at all of the character options and write out a plan of action beforehand. Taking this entry from the Pathfinder SRD for Giant Octopus, a creature with multiple attacks whose combat could take an incredible amount of time, you could set the attack up as a combat against a crew of PCs on a ship and lay it out like this:

General Strategy
The octopus will grab the PC’s ship, keeping some of its tentacles engaged in holding onto the ship. The Octopus is looking for food and is seeking to grab everything off of the ship that is edible. It waits in camouflage on the bottom of the sandy seafloor to ambush passing ships and can be spotted to make the fight easier.

Preemptive — If a PC makes a DC 23 (15 +8) check, they spot the oddity on the bottom of the sea floor. The octopus will still pursue the ship if they change course, but the attacks will be at —2 as the ship can be positioned to more easily fend off the octopus’ attacks.

90 HP (Assuming about 10 —12 rounds of combat where each tentacle doesn’t attack all the time, then repeat)

If the masts come down, the ship is destroyed and the octopus escapes into the water, but the PCs are left on flotsam.

Once you’ve got the general strategy for the combat figured out, roll up a couple of extra attack rolls and damage rolls as well as any other rolls you think you might need. When you are ready to go, you just have to pull out the tables and go down the list. Your combat will probably need tweaked along the way, but you’ve got a strong foundation for it and plenty of room to improvise within. You won’t have to spend the entire time running the combat and rolling to determine what happens next, just push forward through the list and make the encounter go much more quickly.

Pulling completely from the idea behind Sentinels of the Multiverse, and favoring games that have more flexibility in the rules for enemies, you could create a deck of cards that has the enemy combatant’s actions on it and draw them from the top of the deck. Divide up the enemy combatant’s actions into basic attacks and special attacks, then roll beforehand and write the results on each card. With one or two stack of cards before you, you 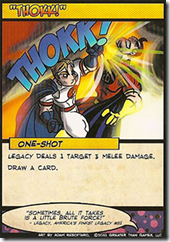 can pull from them when the enemies attack or have an action, determining what they do on each turn randomly and preventing the need to constantly roll as the game moves on. This can be as simple as pre-rolling a bunch of basic attacks and drawing the cards so you don’t have to roll and resolve each turn, or it could be as complex as putting all of the basic and special attacks together and drawing randomly to determine when the really nasty attacks go off.

The Deck method requires a lot more customization and requires you to allow for much more randomness. You can’t be sure that a BBEG’s spread attack will go off when all of the characters are grouped together. If you are okay with a bit of fudging, you could play it more like a hand of poker, pre-rolling and writing the results of attacks on cards, then drawing out 2 or 3 at a time and playing them when opportunistic.

Every game will be very different in what stats it needs tracked or how damage is calculated. This makes it very hard to give a good example, but here is a template that you can modify to make your own cards for use with a Deck method. It’s not hugely pretty and it is in .doc format for easy editing. 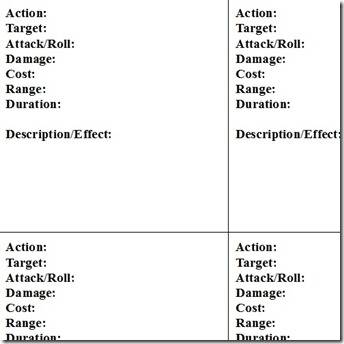 There are many other ways that you could use with a pre-created combat that will run itself at the time of the game. Setting up lots of charts for the actions with their rolls already done and rolling off of the chart will speed things up. Using the deck method and building much more complex options into the cards can spice things up. I.E. Poisons the character with the lowest HP, does X damage to the two closest characters, etc.Â  Ultimately, this comes down to the game you are playing and how its combats go. Not all games are going to have a smooth version of a self-run combat, but most combats can be improved by taking the mechanical fiddly bits out of the action and figuring them out beforehand. Sitting down with the question “How do I get my combats as close as possible to running themselves for this game” will help you come up with some tips and tricks to improve or speed up your combats.

So, would you leave a combat up to random chance that a card deck system would provide? Have you created combats beforehand and run them in your games? What factors would you be comfortable setting up beforehand to make combats run themselves?

4 Responses to Running Combats Without A Game Master