When you get right down to it, what is an RPG? It’s an engine for making interesting decisions. 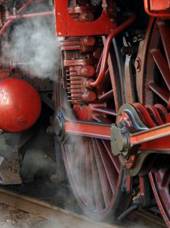 When your players are playing in your campaign, at the most basic level they’re doing one of two things: making decisions, or having stuff happen to their characters. Stuff happening to their characters is by far the less interesting of the two — it’s the decision-making that really matters.

The game rules — the mechanics — are there to facilitate decision-making (and to a lesser extent, to facilitate stuff that happens to the PCs without any player decisions being involved).

Even something as simple as having a rating for a skill is related to making decisions: if you’re really good at that skill, you’ll look for opportunities to use it; if you’re terrible at that skill, all sorts of fascinating — and entertaining — things might happen if you try to use it anyway.

And when you use the skill, the mechanics — and in 99.9% of games (coughcough Amber coughcough), the outcome of a die roll or two — determine the outcome. That determination is the game’s mechanics facilitating decision-making: As a result of your decision to make that roll, something will happen. But will it be interesting?

In most games, the outcome of a skill check is likely to be at least somewhat interesting — and at least some of the time, it will be game-changing, awesome, and unforgettable. But mechanically, skill checks are a pretty simple decision-making mechanic — they often fly right by without anyone paying much attention.

Combat: The Most Common Example

In many — probably most — RPGs, combat is the part of the system that best facilitates making interesting decisions. There’s something at stake with every die roll, and every single decision you make flows into other decisions that are made by everyone else at the table.

Combat is a complex dance of decision-making — which is part of why it tends so much fun. But what about the roleplaying side of roleplaying games?

Frankly, many RPGs are not engines for making interesting decisions when it comes to this aspect of tabletop gaming. You’re often left to make interesting roleplaying decisions on your own, without much support from the game mechanics — something some groups absolutely love, and others have problems with.

Often, you make an interesting decision on your own (either as a GM or as a player), and then find a mechanic that can be used to represent that decision in the game. Which is fine — improvisation is at the heart of gaming, after all. But it’s not always the best solution.

The first time I played Burning Wheel at GenCon a few years back, I saw an RPG that was expressly designed to act as an engine for making interesting decisions in lots of different ways — not just during combats.

In addition to an interesting physical combat system, BW features the Duel of Wits — a combat system for debates, verbal sparring, and all sorts of other kinds of roleplaying-heavy conflicts. Some of the most fun I’ve had gaming has been a direct result of this system.

White Wolf’s Morality/Humanity/Wisdom/etc. system is another good example of a roleplaying-related mechanic that’s specifically designed to foster interesting — and challenging — in-game decisions. I absolutely love the effect this system has on play, both as a GM and as a player.

In this past weekend’s Ghouls game, we had three serious Morality-related decisions come up that kept us playing until well past bedtime. We could have made the same decisions without a system to back them up, but knowing that our roleplaying was tied to a game mechanic that had teeth made the whole experience much more entertaining.

Ever since I began thinking explicitly about RPGs from this angle — as being engines for making interesting decisions — my perspective on gaming has shifted. I find myself drawn more and more often to game systems that do that well not just in combat, but in other areas, too.

And as a GM and a player, I look for opportunities to use game mechanics to foster interesting decision-making — which makes the game more fun for me, and I hope more fun for everyone else at the table as well.

What are your favorite systems or mechanics that really shine in this area?

11 Responses to RPGs Are Engines for Making Interesting Decisions