Roll With It: Random Encounters And Setting Them Up In Roll 20 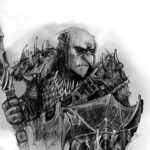 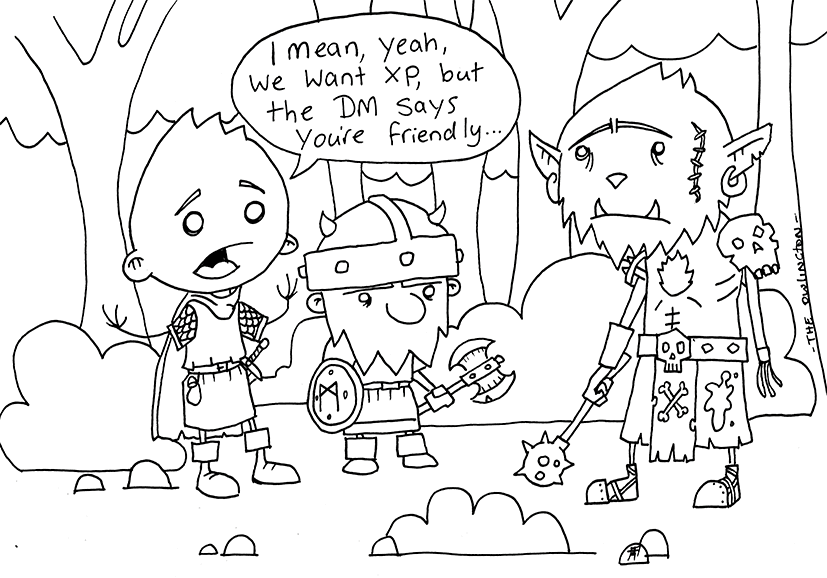 Today’s Guest Article and art comes from the Owlington, artist and gamer. He talks about random encounters and setting them up in Roll20. Take it away Owlington! – Randomly Assigned John

Random encounters. A lot has been said about this subject and a lot has been created to ease the burden of the time poor Games Master, but what purpose do they actually serve, and how can we use them to inject more into our games?

Generally speaking, getting from point A to point B can be a real pain in the ass, even in our mundane lives (mostly due to the lack of Teleporters available, thanks for getting my hopes up Star Trek). There’s the whole problem of time/space being in the way of where we are, and where we want to be. In our chosen fantasy worlds, we’re also subjected to nasty stuff occupying the same time/space that we’re attempting to cross. Goblin ambushes, orc ambushes, human ambushes, bush ambushes…..you get the idea. Creating interesting things to break up the journey is key to creating an immersive world for your characters to live in, and so we have random encounter tables.

Random encounter tables give us an element of randomness in our games that do a few cool things:

Let’s look at number 1. In many games, players have a limited amount of resources that they are able to use within a certain time period; this is true of the majority of RPG systems. This resource management is a key mechanic, but whether it’s HP, spells per day, rations or antimatter fuel, you want to keep pressure on your players and not let them get complacent about when they’ll have a chance to replenish their resources. Random encounters add to this uncertainty and create an atmosphere of tension. Also, there’s the tasty, tasty XP and loot as a return for the players, which they’ll appreciate all the more.

So that’s the mechanical side of it: putting pressure on the characters resources.

The second point has the potential to be way more useful for a GM. Random encounters add to the ongoing narrative by introducing an element of uncertainty to the plot, allowing the DM to manipulate the encounter into either new information for the existing narrative, or as a potential branch of a new narrative. With one roll (more or less, but I’ll get to that) you have either the opportunity for more exposition, or to introduce new weirdness or both.

Let’s take The Hobbit as an example. The journey to Rivendell could have been hand waved and suddenly The Company is chatting to Elrond. With the narrative being as it was, and assuming a GM who likes things neat and tidy, one might assume that the GM would stock the area with level appropriate creatures, so maybe a patrol of elves, or some racist humans or something. Instead the Company encounters a much more interesting threat, and the story is changed dramatically with the appearance of 3 trolls, new information about the monsters in the world (which is almost foreshadowing for the trolls in the Lord of the Rings) and acquisition of the elven blades that help create an interesting encounter between the Dwarves and Elrond. Players like stuff to happen. They want exciting stuff to happen, and by using random encounter tables with a bit of GM ingenuity we can give that to them, and then some.

They want exciting stuff to happen, and by using random encounter tables with a bit of GM ingenuity we can give that to them, and then some.
Random encounters can be fun and engage both the mechanics and the narrative, and by doing so engage the players. I’m going to show you my super simple way of making a Random Encounter Table for improv DMing. You’re going to need a fist full of standard polyhedral dice, and your brown pants.

The first thing you need to do, is work out if there even is an Encounter.

Next, we check for what kind of encounter we have. Let’s check the Disposition.

Yes, this means the peaceful unicorn might want to murder you, and the hungry vampire just wants someone to talk to, but that’s cool.

sometimes it’s cool just to find a cool place, sometimes that place will try to kill you.

So we know who, and maybe why; next we find out where: the Location. Much like the previous roll, we’re going to see if things are going to help or hinder us.

Awesome! Cool! You’re so attractive Andy! I hear you, but what about the monsters? What do I put there? Well, this is your last roll. Throw a d12. Here’s where it gets a little tricky, and you need a table.

Alright! Now you know that the encounter is happening, where it’s happening and how difficult the players will find the encounter. The question remaining is who are the brave adventurers encountering. It’s the crux of this whole thing, the cornerstone of the mechanic. The answer is; it depends. I don’t know, you’re the DM you work it out.

Harsh, I know, but that’s what it’s all about. What does your game need, what does it demand you to throw in the way of your players. If the characters are in Mirkwood, there’s going to be spiders. If your players are in Alexandria, and the zombie horde has escaped The Quarry, there’s going to be lots and lots of zombies, but maybe even some raiders (seriously, what the heck The Walking Dead?). If your characters are in a dungeon ruled over by a troll lord….well, you know what to do. Sometimes you might want to just go against the flow, and throw something weird at your players, a noble troll paladin, or a insane murderous princess. You know the place, level of difficulty, and the initial disposition of the encounter, the rest is just about using your imagination.

Using this in Roll20

This whole thing started as a request from a buddy to show him how to make this system work in Roll20 (which is super rad, by the way. Check it out at http://www.roll20.net), so this is how to make it work.

The first thing we need to do is set up some tables.
We’re going to need 4 of them. The first one we will call them ENC, DIS, LOC and DIF.

ENC will contain 3 table items, but I like to flesh them out with many more variants. Call one of the items “Encounter”, one will be “Terrain” and the other will be “Nothing”. Set the weight of “Nothing” to be “8” and the weight of “Encounter” and “terrain” to “1”. I personally have 8 distinct items for nothing that say stuff like, “Huh, must have been the wind”, “Your journey continues without incident” and so on. The key here is the there is a 1/10 chance for an encounter to happen.

LOC is, I think, another one that you could potentially blow out with a whole heap of additional information, like what sort of location it is (maybe it’s religious, or arcane, or of historical import), but for now, let’s just set it up to have 3 items. Hostile Terrain, Neutral terrain and Friendly terrain. Set the weighting to 1 for hostile and friendly, and 4 for neutral.

DIF is the final one. It will have 4 items; Inconsequential (weight 1), Easy (weight 3), Medium (weight 4), Hard (weight 3), Deadly (weight 1). This table will tell you how difficult the encounter will be.

Now that you have your tables, you’re going to set up your macro for your players to roll on. My macro looks like this:

/em rolls to check for an encounter:

The first line creates an emote macro that says that an encounter roll has been made. It’s flavour text.The second line will tell the players if there’s an encounter or not. Writing this, I can see the potential to create an additional entry that gives a false negative to use for ambushes, but I’ll leave that for another time. The third line sends the results of the tables we made to the GM. Only they know what’s really happening and the amount of trouble the characters are in.

So there it is. This is how I do encounters. I hope you find something useful in there that’s going to help your game, or at least something that made you raise an eyebrow slightly and go say ”hmmm, interesting”. There is room here for so many variants, and so many tables to describe the minute details of the encounter, but sometimes leaving it vague and giving yourself room to create is better. For me, the method of creating random encounters gives structure from nothing, and the visceral feeling of throwing a handful of dice and seeing what happens is icing on the cake. Just be sure to remember the golden rule: make awesome things, and just roll with it.

Grab some dice, give them a roll and tell us what you concoct in the comments!

The Owlington is an artist, gamer, and dad with a passion for RPGs and art. With 20 years experience in the pen and paper world, and an incurable need to scribble and draw, Andy likes nothing more than to lose himself in the fantastic. One day The Owlington hopes to roll better when he's a player, so he can enjoy a character for more than 3 sessions.

3 Responses to Roll With It: Random Encounters And Setting Them Up In Roll 20