I was recently offered a free review copy of The GM’s Field Guide to Players, by Cherie “Jade” Arbuckle of Evil Machinations, and it immediately piqued my interest. There need to be more system-neutral GMing books out there, and I like to spread the word about books like this on the Stew, so I was more than happy to review the Field Guide. 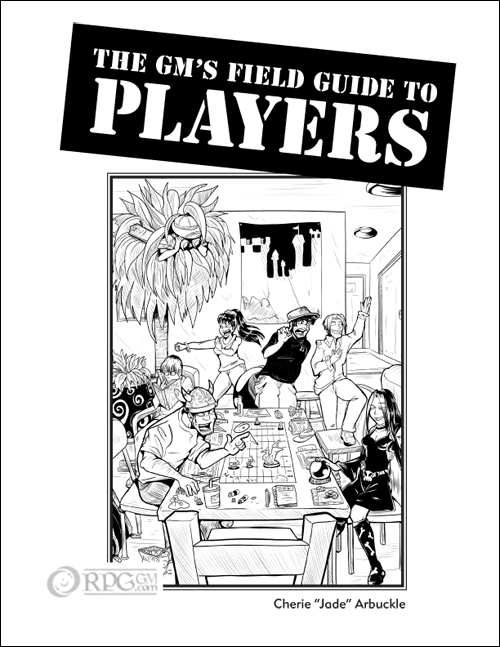 The Field Guide is a 60-page PDF available directly from Evil Machinations for $7 ($6 until October 31, 2012), as well as from DriveThruRPG. It’s visually straightforward, with two columns of text, good font choices (save for the script-y header font, which I find annoying), clip art illustrations, and an original cover.

The PDF isn’t hyperlinked or bookmarked, and it lacks an index. Those aren’t dealbreakers in a book of this length with such a focused topic, but their absence is irksome. It looks like something I could put together in Word and export to PDF, and is too basic for its $7 price tag.

Overall, the writing is conversational and clear — a good fit for this kind of book, which could easily stray into dry and instructional if it was more formal. It would have benefited from tighter editing, as well as from proofreading. (An editor is credited, but no proofreaders.)

Taken together, those factors make it read like a blog in book form, which is both a plus and a minus for me. I like the tone of a good blog post, but if you package it up and sell it as a product I expect things to be stepped up a few notches.

Cherie’s introduction lays out what the book is all about:

So how do we deal with these sometimes brilliant, sometimes aggravating things we call players? That’s what you hold in your hands right now. This book is a collection of advice on working with different types of players and how to handle things when those player types create problems that make the game less fun, for you and the other players.

The Field Guide is broken down into two main sections: Player Types and How to Use Them and Dealing with Problem Players. I like that the focus is so narrow: If you’re struggling to keep your players engaged, or run into problems with your players, here’s a resource to consider; if not, move along.

As a point of comparison, here’s the list from the 4e DMG in the same order: Actor, Slayer, Power Gamer, Watcher, Thinker, Storyteller. The only player types that don’t overlap are the Mechanic from the Field Guide (which has no DMG analog) and the Explorer from the DMG (which has no Field Guide analog). The Field Guide goes into a lot more detail than either the DMG or the DMG 2, and isn’t D&D-centric; that’s a good example of the blend of old and new in this book.

I’m not a big believer in rigid player types, but as shorthand they can be a useful tool for understanding some (not all — I’ve rarely met players who conform to just one player type, though that could just be me) of what makes your players tick — or what makes you tick as a player.

Each player type gets a lengthy description, including examples to help you spot behavior that suggests a particular type — like creating mechanically unusual PCs, which Cherie flags as typical of Character Actor players. This is followed by a discussion of that types virtues and vices, ways to make them useful (more on that in a moment), things to do/avoid when gaming with them, and lastly “sub-classes” of that player type. 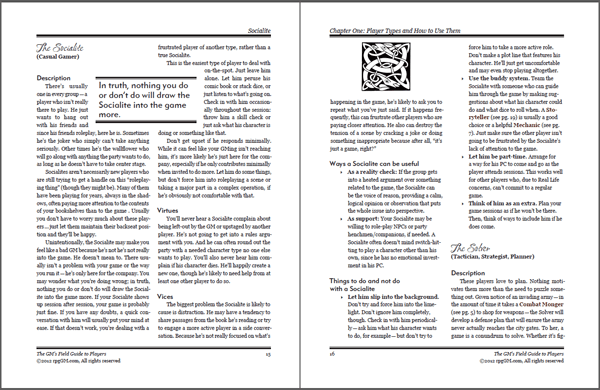 “Ways a [Player Type] can be useful” is the most interesting sub-section to me. For the Character Actor, the Field Guide suggests using that type of player as an understudy (giving her NPC roles to play when her PC isn’t in a scene), as a co-creator (asking him to create NPCs for the game), or as an idea generator (stealing cool stuff from her character’s background to use in the game). This is specific, practical advice that’s easy to implement, and it resonates with my personal experience with players who have Character Actor traits.

This is an area where the Field Guide shines for me: It provides five pages or so of advice on each player type, which gives plenty of room to cover general and corner cases and to provide specific and useful advice. I also dig that the advice isn’t judgmental. Cherie presents the types without bias or rancor, an approach that recognizes that people have different playstyles and that’s cool — it’s a feature of gaming, not a bug.

This section opens with a discussion of how to deal with problem players in general, regardless of the type of problem. It’s good advice, by and large, though not all new and not all likely to be applicable to you (the latter being a point Cherie makes at the beginning of the book). If you’re new to gaming, or not so great at dealing with interpersonal problems, you’ll get more out of this section than experienced GMs and folks who are more comfortable addressing conflicts.

Cherie provides advice on dealing with the following kinds of problem player:

These archetypes resonate with me. I’ve gamed with all of them at some point, usually very briefly, and it’s nice to have some tools and tips for dealing with them apart from “Don’t game with them anymore.” 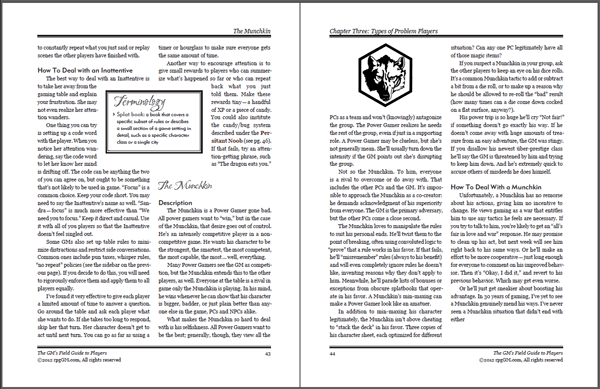 There are a lot of tips in this section, from instituting a pun tax (a small fine paid by anyone who makes a pun at the table; use the pot to buy pizza) to having players who don’t much care about game mechanics and players who specialize in rules minutiae teach each other their respective talents. Some I’ve seen, or used myself, or heard about; others don’t sound useful to me.

And that’s likely to be true for most GMs: Can you use every ounce of this advice? Probably not. But you’ll find things you can use and get ideas from other tips even if you don’t use them, which means there’s a lot of good material here that’s broadly applicable to many GMs.

That leads into my overall takeaway from this book: Not everything in the Field Guide is new, but quite a bit of it is — and the parts that aren’t new are generally covered with an interesting spin, or fleshed out with good examples and specific tips you can try out. On balance, there’s a lot of good material here even if 100% of it isn’t relevant to you and your group.

Would I buy it?

It’s always hard for me to judge the value of PDFs under $10 (in the “Starbucks range”), but no. There’s good stuff in the Field Guide, and I particularly like the section on problem players, but my lizard brain tells me $7 is too much given the relatively low production values.

If an in-depth look at one or both of the Field Guide’s topics — player types and problem players — sounds like something you can use, and if you don’t mind the bare bones presentation (or are less picky about that stuff than me!), then yes. There are a lot of tips here for $7, and they’re clearly presented.

10 Responses to Review: The GM’s Field Guide to Players