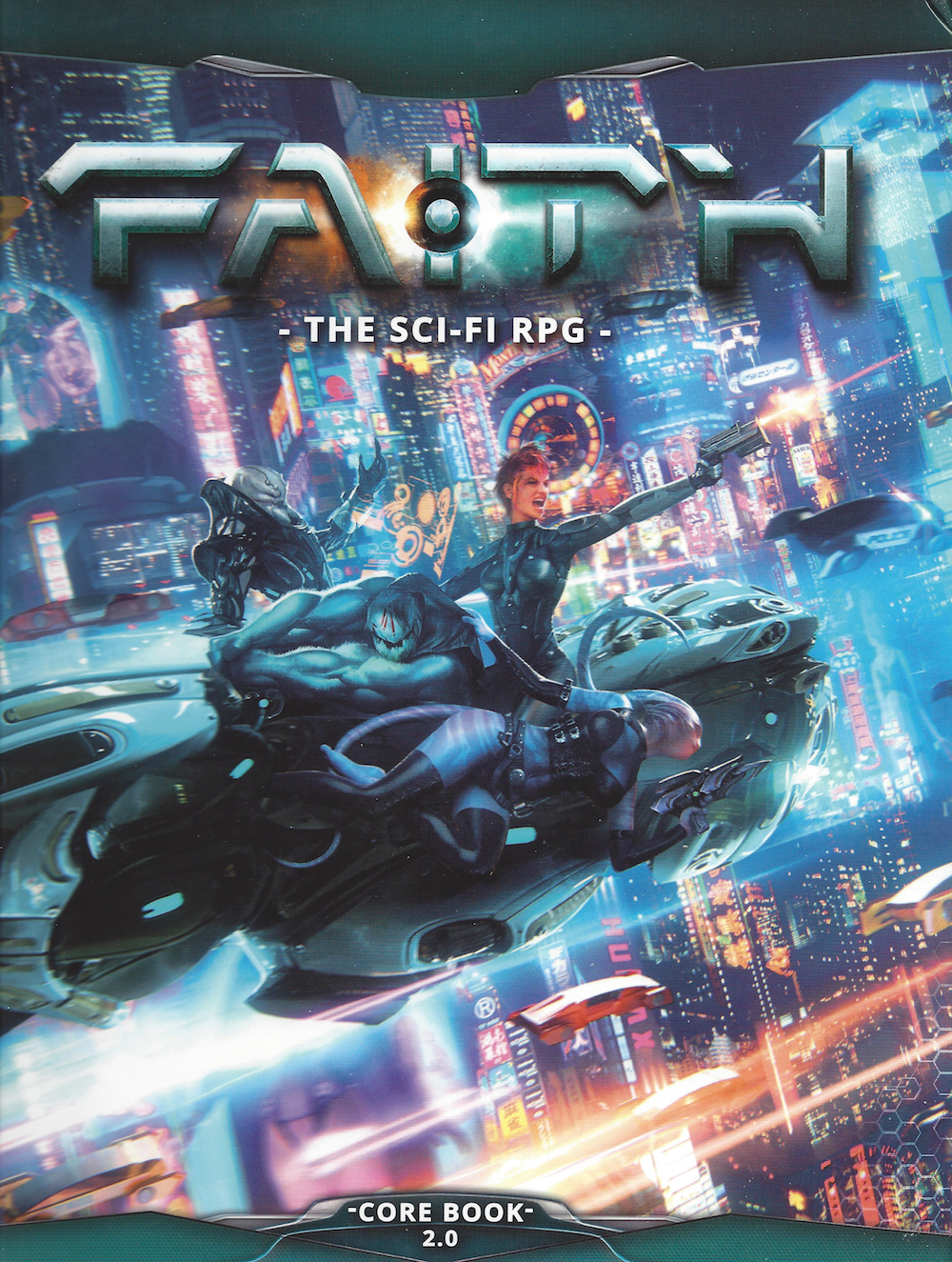 I’m stepping into Jared’s shoes as the “review gnome” for the day and doing my own style of dance. You’ll learn very quickly that his style of reviewing and mine are quite a bit different. I am, by no means, saying my method is better. It’s just a different approach at accomplishing the same goal. I hope you get something out of this review.

Today, I’m presenting to you an RPG called: FAITH, The Sci-Fi RPG.

Find out more from Burning Games!

FAITH is a science fiction roleplaying game of epic adventures, where starfaring alien civilizations race to explore a dangerous, unknown universe; while the Gods compete for followers; and the Ravager threaten civilization as a whole.

It takes place in a far-future version of our universe, where sentient computers and space travel are a reality, and daring explorers carry high-powered plasma cannons and have their brains linked to formidable hacking devices.

My immediate thoughts on the cover art was that it definitely captured the feel of a cyberpunk game, but not necessarily one of a generic sci-fi game, which is what the title implies. The artwork is evocative, and beautiful to look at. The background cityscape behind the people on the hovercycle is stunning, rich, detailed, and evokes the feel of Blade Runner 2049 or Altered Carbon.

Once I dove into the meat of the book, I reflected back on the cover art and found the inclusion of bio upgrades and tech upgrades to be inclusive in the ideals represented in the cover art. The interior artwork (more on that later) also reflects this style of focus on the characters and their upgrades and abilities.

The book does make quite a big deal about starfaring and traveling the stars, and I felt like the book’s cover could have reflected this in some manner. Perhaps a starport instead of a city as the backdrop for the high action scene captured in on the cover? That’s really my only suggestion on this front.

The randomization mechanic in FAITH is based on cards. I always get a little nervous with card mechanics because of the age-old habits of rolling dice. However, I do my best to set that aside and press into the card mechanic systems with an open mind. I’m glad I did in this case.

There are several different approaches to the deck of cards. There can be a shared deck (for small groups), a deck shared by the players and another for the GM, or one deck per person (for larger groups or longer campaigns). While there is a custom deck of cards that can be ordered from Burning Games, they were thoughtful enough to allow the rules to work with a standard poker deck (including the Jokers, which is so much fun!)

Everyone starts a scene with seven cards in hand (eight for humans) and then plays, discards, and draws as needed or as triggered throughout the scene. Players aren’t allowed to share/show their hands to the other players, but they can give hints as to how confident they feel about their chances to be productive during the scene. Because there are options in hand on which card to play in a situation, the players get additional control of the potential outcome of their characters’ actions. This narrative-building element really pleases me. It’s not as harsh as rolling a single die and hoping the number is high enough to accomplish something. However, using a high card up front may gain some benefit, but will reduce the PCs odds of offsetting something else that happens later in the scene. Also, since the cards refresh at the end of each scene, the GM can adjust the difficulty of a single encounter by making scenes really short or really long. Longer scenes will have a higher difficulty because the number of cards the PCs get doesn’t increase.

Overall, the game mechanic feels balanced and plays smoothly to me. The main issue is with analysis paralysis that some players can come into. This is where the GM needs to step in and encourage those types of players to think ahead or speed things up a bit.

Honestly, I feel there is too much world-building and backstory here. The book itself is 433 pages long, but the first 311 are dedicated to races, organizations, history, and building up the general sense and theme of where the characters are going to be living. I’ll admit that while reading the entire book (cover to cover!) that I started unconsciously skimming through some of the backstory. I love the parts about the races themselves, the organizations, and the subtle interactions between all of this, but the bits about culture, history, foreign affairs, and similar items didn’t feel like they were necessary in a core book. The parts I didn’t skim past were well-written, but I didn’t feel like they were needed. I could see most of this information coming in low-cost splatbooks or expansions that support FAITH.

If 300+ pages of “backstory” feels daunting to you, don’t worry. You don’t need to know or memorize or even skim through most of what is provided. Sure, if you want to go “100% canon” with the game’s pre-set universe, have at it. There are purists out there like that. I’m not like that (even with canon for things like Star Wars or Firefly), so I’m more than willing to take the general concepts provided, the rules as written, and start engaging my players in telling our stories using this framework.

The prose portions of things that were embedded in the “core rules,” “character,” and “vehicles” sections were spot on, though. They did their job of shining a light on things in the right moment and setting the feel and tone of the game.

Layout is very important to me. Not only should the content make sense and be engaging, but it also needs to be accessible. Weird, stylized fonts that are hard to read make for a pretty book, but a horrible reference. This is why I evaluate the layout as well as everything else.

In this case, the use of a sans serif font as a universal in the book took a few minutes (no more) of getting used to, but it did put me in the mood that I was bringing good sci-fi fun into my brain as I read the words.

The typical “long list of mods/equipment/supplies” found in most sci-fi games is completely absent here. Don’t get me wrong. The information is there, but the boring lists have been replaced by great thumbnail artwork, easy-to-read stats, great flavor text, and excellent presentation.

The interior art really captures the feel, themes, and ideals behind the game itself. It supports the mood where necessary and sets the mood in other places. I’m incredibly pleased with the artwork for the character races and equipment as well.

In addition to supporting the RPG, the artwork is highly consistent, and the art direction is superb. I can sense the level of effort that went into this aspect of the book’s creation.

One thing I haven’t mentioned yet is the fact that there are religions and faiths heavily involved in the game. This is fairly rare for an RPG based in the sci-fi genre. The good thing about the implementation of gods in FAITH doesn’t feel “bolted on.” It’s a natural part of the game and incorporates well with other aspects of the game. Not many people could pull off religion+technology+starfaring+mechanics+races and have it work well. Burning Games did just this. Big bonus points for doing this.

Whoa! Wait? How can a game get “26 out of 25” possible points? I don’t count the Bonus Points as part of the maximum. They’re bonus after all. These are like the “extra credit questions” on an exam in school. Being able to exceed the “maximum” of 25 is entirely possible in my review system, and when a game or product manages to do this, it’s definitely something to keep an eye on.

This game gives me the feel of wild and crazy adventures set in a fast-paced universe which brings joy to my heart. There’s also plenty of “weird” going on here, and this gives the game its own unique flavor. I’ve said this before about their starter set, and I’ll say it about the full game as well: If you like Firefly with some weird thrown into the mix, you’ll like this game.

If you’re doubtful about the card mechanic, I can say this one hits the right mix of random, player control, highs, and lows to allow a great sci-fi story to be told. Give it a try and see what you think.

SPECIAL NOTE: I was given a copy of the game by Burning Games for the purposes of this review. They did not pay me for the review (I wouldn’t do that!), and I’ve made no personal gains from doing this review. I simply wanted to do it for Burning Games since they asked so nicely, and to get the good word out about a good game.

Burning Games also sent me a setting book for Tiantang, which is the campaign sourcebook for the dyson ring capital of the Corvosphere. I’m not going to dive deep into a review on this book, but it really amped up my excitement for running this game. While I dinged the core book for “too much backstory,” this 104-page volume had just the right amount. The book contained information about a handful of different sectors and the people/organizations found within. It also included a sweet little adventure called, “Secret of the Yinshen Shi,” as well as gobs of NPCs and some additional gear.