The Stew forges on, dragging you kicking and screaming into the digital age, this time with a review of the iPhone/iPad app, Battle Map. Educate yourself on this tool available for GMs willing to take their map-making skills to the “next level” (see what I did there?) and whether this application is for you.

Well, that is, if you own an iOS device, that is.

First, might I suggest you read our three (!) previous entries regarding using the iPad at your gaming table? Fantastic. I’ll wait.

My concerns with Battle Map were primarily around a very game-specific application within a niche segment of a niche industry. That is to say, how many GMs out there running a fantasy RPG that require a tactical map-making program–in portable format–that happen to own an iPad? It’s one of those very specific applications that makes me understandably curious as to who the target market is beyond us ten guys. 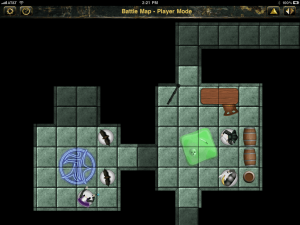 However, I can certainly appreciate the love and craftsmanship that has gone into Battle Map, the creation of Ray Wenderlich. On its surface, Battle Map is exactly what you expect: an easy-to-use map drawing program for your iPad. Using your finger you simply draw your map and populate it with doors and features. It’s simplistic in its design and a real pleasure to use. Actually, without reading the accompanying help file I was crafting maps on its 64 by 50 map space with ease. (A strange limitation, I will admit. I would have expected 64×64, for example.)

Opening the application you are presented with a blank canvas. By selecting the appropriate background–of which there are 13–you can use your finger and paint your map. The cool part comes with the auto-designation; stone floors are surrounded by walls and as you “paint” sections together Battle Map will rearrange the walls on the floor, creating a seamless environment. The technology isn’t revolutionary, I will grant you, but its damn fun to do with your finger!

Next you add the surrounding grass or hot lava (or magma! if you prefer) to build the environment. Add a door, populate the map with a few creature counters, and you’re good to go.

Then you can pass it around the table, having players move their characters accordingly–it is an iPad after all–with the program tracking line of sight issues, a special “GM mode” to represent hidden traps/monsters, and their ilk. Oh, and if you’re feeling really frisky, hook the iPad up to your TV or computer monitor and show your gaming group the map, interactively. In “Player Mode” Battle Map removes the grid and only shows what the players, represented by their counters, can see. Move forward into a hidden trap? Bam! Battle Map shows the trap and you pause to resolve. 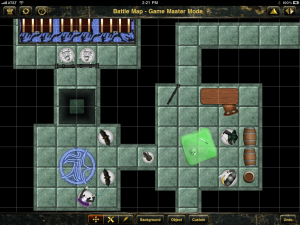 Reality is slightly different, as once you draw out the basic map with the limited inventory of background and objects, you then have to program doors, characters, and visibility of sections. Unto itself not terribly difficult but the iPad is not a content creation device. As I did this I found myself wishing that Battle Map had an OS X (or Windows) front end that I could use to do the heavy lifting and then export onto the iPad. That would be ideal. Furthermore, what does Battle Map bring to the table (heh) that many existing mapping applications don’t already do? Well, for starters, they aren’t portable; I created my first map on the plane to Philadelphia with the iPad cradled in my lap. It’s incredibly convenient and easy to use. But for any of the really useful features you’ll find yourself craving either a Bluetooth keyboard or your actual computer, complete with mouse. Many times I also found my self instinctively double-tapping to have Battle Map auto-zoom in on a selection, as you might do with mobile Safari, but that simple reveals/hides your UI buttons.

Furthermore, the default backgrounds–while perfectly serviceable—are limited in scope. One can only imagine that future in-application purchases will expand the offering further. To be fair, Battle Map does let you import your own custom objects but at this point my eyes gloss over; game prep is already a lot of work, creating custom JPEG/TIFF objects for my map is one level too many. If this level of customization is in your wheelhouse, however, then this could well be the application and solution for you.

But for those willing to take the time investment (and own an iPad), Battle Map really excels. I haven’t even mentioned the die roller, built into the application directly. Heck, on that functionality alone Battle Map is perhaps worth its asking price of $29.99. (Okay, probably not; RPG Calc HD sells for $1.99 by itself. Check it out!)

Ultimately your utility and use of Battle Map will depend on whether you’re running D&D or its ilk and have a heavy dependency on a tactical representation of combat. If you’re willing to invest a bit of time to draw out your maps and code objects accordingly—and are okay with only 26 character/monster objects, none greater than Large size–then you can do no wrong with Battle Map. For the other nine of us with iPads, it really comes down to whether you can find a use for this program looking for a problem to solve. Me? It’s hard not to like a application which is well-designed and clearly a labor of love. The cost is a bit hard to swallow for limited utility based on the game that you may be running this particular week.

Since this review was originally penned, there have been two updates to Battle Map, stomping out a few bugs but also adding new functionality. This Universal app will work on iPads and iPhones alike now, and includes a few more backgrounds and objects pre-loaded. A nice enhancement is the ability to limit your object selections by groups, making it easier to find what you’re looking for as–presumably–even more objects are added or you’ve included your own custom ones. The map display can now be locked, making it easier to pass the iPad with map around the table. It’s refreshing to see a product so well-maintained and new features added with such speed.

Battle Map is developed by Ray Wenderlich and Razeware. A complementary copy was made available to Gnome Stew for review purposes. Battle Map can be found in the iTunes App Store (iTunes Link).