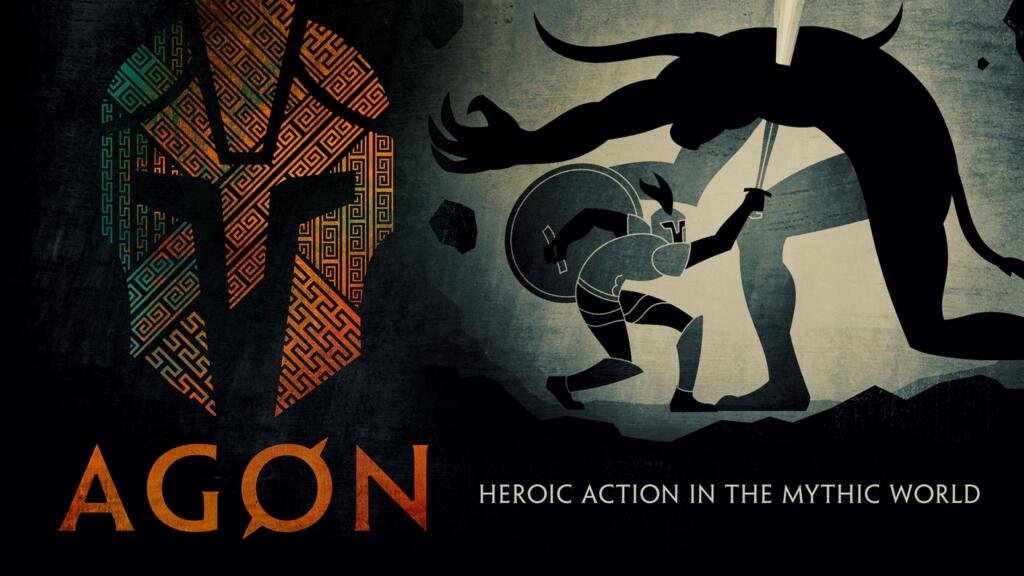 As at least 2,661 of you from the Kickstarter might have heard, but Agon is coming out sometime in April! In case some of you are wondering just what Agon is: “Agon is a game of fast-paced heroic adventure inspired by ancient legends,” or at least by how the super successful Kickstarter describes it as. It’s a uniquely paced RPG written by Sean Nitter and the well-proven John Harper. You know, the guy that wrote and designed Blades in the Dark and constantly the target of my System Splicing knife? Honestly, I’ve gutted more mechanics out of Blades in the Dark to shove into other systems than other systems HAVE in mechanics.

Before we start with the legit review, can I start with one major gripe? Agon lets you be either the Scion(distant kid) or the target of an Olympian God’s favor. So how the Hekate is Hekate one of the 12 gods listed in this game and not my sweet Dionysus? They list out literally 11 of the 12 Olympians, but give Dionysus’ seat over to the Goddess of witchcraft and magic? Is it to make the game more family-friendly? Was wine, madness, resurrection, and theatre just too out of it? I understand that the game likely needed to take in some degree of magic, perhaps to appease the wizard pals who want to play this, but I just think it’s a darned shame to use most of the 12 Olympians and make such a massive swap.

Alright, enough of that.

Admittedly when I was going through Agon the first couple of times it was actually fairly difficult to get through all of it. There’s a lot to take in and it can be a bit overwhelming–in a way, that’s a good thing. The game, the tone, and how the game plays is such a departure from what I’m used to that it was somewhat difficult to entirely process. I’ve played a lot of different systems between D&D 5e, to FATE, to Rifts(1990), to Genesys, to Savage Worlds, and plenty of others. Even with all of them, I’ve been able to refer to some other similar system on the regular to compare them. Finding something that stood apart from all of that was difficult. However, the very pleasing art and layout are particularly helpful in making it easy to get sucked back into the book.

When running it I noticed how it very much felt like I was telling some sort of epic. The flowchart-like phases for each section made it all feel like an epic. It was less about the individual tales we were telling and it all felt like I was one step above that. It was interesting playing with players not necessarily focused on what they were doing, but always thinking about how it would affect the next immediate narrative phase.

If that makes any sense.

The first thing that anyone can immediately tell is how… /stunning/ it all is. It really calls out to anyone that appreciates solid Greco-roman influences and, honestly, it reminds me a little of Monster Hunter or the movie 300. Admittedly, I’m not exactly culturally acute enough to fully appreciate the attention to detail, but anyone that is would absolutely adore its look. I have a feeling that nowadays not exactly everyone is the most up-to-date on Greco-roman things to be nitpicky about it, so as part of the various unwashed masses I’m loving the whole thing.

Honestly, I’m not even certain if I’m using ‘Greco-roman’ correctly.

The layout is clean and simple and the margins have this beautiful wavy-labyrinthine (have I mentioned I’m unwashed?) outline to it that makes me feel like I’m looking at some epic tapestry or bardic scroll. Evil Hat is always stellar on making their books clean and non-cluttered and this is no exception in the slightest. Reading through it makes me think ‘yeah this is definitely Evil Hat’ at the reins.

I also want to just slide in that Character Creation in this game is just so… clean and crisp. It takes up, at most, 3-pages and is incredibly clear on the role of each decision you make during it. It’s possibly the best example of modern character creation I’ve seen in a long while. The example character sheet fitting right in the end as well is a great reference. “Did I do this right?” isn’t something that many creators seem to care about since it’s obvious to them, but many players do.

Agon uses 4 major ‘Domains of Conflict’ for their skill/conflict & resolution mechanics. This is split between Arts & Oration, Blood & Valor, Craft & Reason, and Resolve & Spirit. All conflicts tend to fall under one of these, and these are represented not in modifiers, but dice. So your Blood & Valor could be a d6 while your Craft & Reason is a d8. Not only are those associated with dice, but also your ‘Name’ or how famous you are, and your ‘Epithet’ or what you’re about.

When you roll various contests, or engagement, or any other conflict resolution mechanics, you typically roll your Name (let’s say d6) and the domain (let’s say Craft & Reason at d8). If your Epithet applies (High-Scholar at d6) you add that dice too. Let’s say you rolled 5, 3, 4. What you do is add the two highest values, or 5+4, for 9. There’s additional dice you can add either using your resources such as Bond (to add your ally’s Name die), taking damage (Pathos) to add additional Domain dice or invoke your Divine Favor from your God to add a d4. Unlike all the other dice, Divine Favor is added to the final result. The rest is simply adding to the pools of fate to draw from.

The rule system reminds me a lot of some form between FATE and OVA: The Anime RPG. FATE because you’re looking to draw on the right situations to pull out your Epithet and Divine Favor to give you an edge; OVA because you simply roll larger and larger pools of dice only to sum up a small number of values. The fact Agon stands out even between those two RPG-oddballs is incredibly striking to hipster swill like me.

Honestly, there’s very little that I can personally say that’ll result in a non-recommendation. This book is glorious from front-to-back with solid and clean mechanics and I would personally recommend folks to pick it up the moment it’s available. However, there’s always something to nitpick.

The main issue I have, at least in the version of the book I’ve got, they currently call the GM, or Gamemaster, the ‘Strife Player.’ I’m of the belief that ‘Strife Player’ isn’t particularly… striking in a way that’s meaningful. Essentially it’s the player that ends up leading the game. From a phonetic stance, Strife Player doesn’t roll off the tongue as cleanly and it doesn’t feel distinctive enough to identify the different roles between the GM and the players. The whole way through the book I kept thinking to myself ‘wait, am I able to assign who the strife player is?’ I imagine this was done to help level the playing field and identify that yes, the GM is ultimately just another player in the grand scheme of things. However, its lack of distinctiveness just added a layer, albeit a thin one, of befuddlement through the reading experience.

I’d personally just suggest going with the classic Gamemaster or Storyteller, or Record Keeper, or Seer, or something. If not, I’d like them to at least refer to the Strife Player in its description to something of those lines in a clearer manner. It’d be easy enough to insert an ‘as the Strife Player, you act as the Game Master of the game and take a role to facilitate the play of the other players-‘ etc etc. There’s a whole section of cultural touchstones in the book for the players, so why can’t the Strife Player have some sort of recognizable reference to their role? It feels like an arbitrary omission.

Another concern I have is how processed it almost feels? The way the game works makes it extremely easy for the GM and players to switch roles and even switch characters. Honestly, this type of game really supports ‘West Marches’ or ‘Troupe’ style of games where you can change up who you are and what you do completely on the fly. While that’s good for some, it doesn’t work for all. It also walks you through its ‘Trials’ and ‘Respite’ phases in a very organized fashion. It has the players consistently hit the same beats of gameplay that, at least for the gaming group I played with, it almost felt samey at each run. For groups that desire revolving players so that no one feels ‘trapped’ as the Gamemaster, Agon is absolutely perfect for them. It really just depends on what you’re looking for.

Agon is an extremely modern game that plays with very old themes. It reminds me a bit, honestly, of Supergiant’s recent hit Hades. It goes back to bring a modern take to old stories, or at least the atmosphere of that time and succeeds greatly in the delivery. As someone that loves trawling and hunting around for old games and mechanics, I can say that Agon is the most extreme departure I’ve seen thus far from tabletops in the 70s and 80s, with no point of reference to folks of that time.

It applies dice mechanics to your name/fame, your title, and it consolidates rolling mechanics to pools of varying dice shapes that sometimes but don’t always get added together. It’s even so different from so many current games that you need to wrap yourself around a new headspace, a new way to think, about how games are played and stories are told. For me, someone that likes to drink upon my aforementioned hipster swill, this game is fresh and exciting. I can see it setting a stage for modern games as would say,Â Phoenix Dawn Command might have if it was far more accessible.

I’m fairly excited to see what direction Agon takes us, as a community.