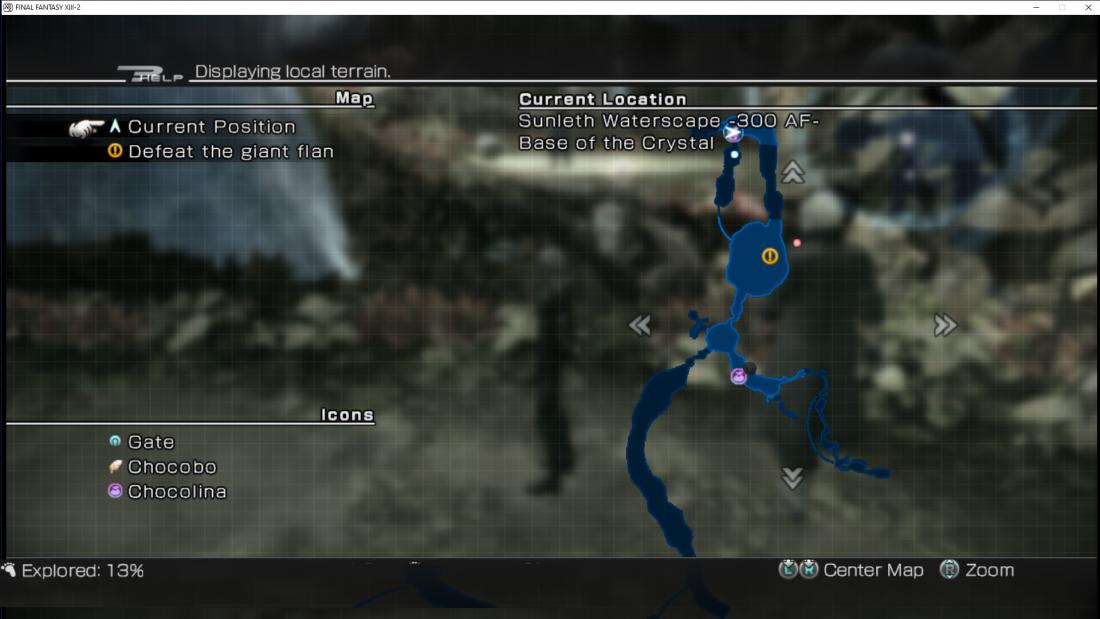 During the pandemic and the stressful events of 2020/2021 version 1.6, video games and tabletop gaming have become two of my biggest salvations. When I get done with my work day and move from my basement home office to the couch upstairs, I usually pull up whatever old JRPG or game I have unplayed in my archives and get a little escapism going. It only makes sense that a lot of the tropes and techniques from those games get drifted in when I run my weekly and bi-weekly games with friends online. One of the techniques that I am realizing was much more common in the earliest days of gaming but I haven’t seen as much recently is what a video game would call a mini-map. It’s a pity too, because I’ve come to realize how great this tool is for cutting out some of the confusion that comes when trying to get on the same page online. So here’s a humble entreat to jump the meta-hurdle and start using mini-maps in the games we are running.

What do I mean by minimap?

Back in the earliest days of tabletop gaming, the GM drawing the map and presenting it wasn’t the common way to do things. The game master would describe things and one player would map on the grid paper, hopefully interpreting it right. Then, the GM would usually use their map to help compare things or show the players how they messed it up. This practice has thankfully fallen away in favor of the GM drawing the map before hand or using the map and then hiding or revealing it piece by piece. With online VTTs you can usually just remove the fog of war and show where the player tokens currently are. In video games, minimaps are incomplete or undetailed but accurate representations of the terrain. Displayed in a top or bottom corner, they act as compass and zoom out of what is around. They can usually be switched to by a simple button click and you get a full but undetailed view of what you have explored or what may be left to explore.

For my definition of minimap and its usage in tabletop role-playing games, I’m actually thinking of a mixture of the video game and older school style, with the work being on the game master rather than players. My minimap is the pirate’s treasure map that gives an idea of where to go and shows players where they exist in the broader world. It can break the meta-wall a bit and give players an overview of where they are going, but I’m in no way suggesting it reveals any secrets or things that should stay hidden. Instead it gives broad outlines, shows the rooms and walls, and helps players locate and plan out their actions.

Why I’m for using it, especially online

I can already hear the gnashing of teeth from the old school gamers (of which my aged bones and ancient dice tell me I’m one) about it revealing too much and coddling the players by giving things away. Absolutely, there are some genres and areas where it is certainly not appropriate and would break the tropes. There are many more, however, where the concept of a broad strokes map of the dungeon helps breed verisimilitude and bridges the gap between player knowledge and the perceived character experience. Imagine this scenario at your gaming table. You sit down and pick up where your group left off at the entrance to the temple of the dark deity. You’ve been prepping for this for your last arc. The Game Master hands you a minimap of the temple, laying out the 4 floors, some broad rooms, and some hallways. The first 3 floors are fairly detailed, the bottom has nothing drawn in. The whole thing is little more than the linear scratch of a pencil on notebook paper and there is no indication of what is in any of the rooms. The GM says you don’t actually know (in character) what is there, but you as players know and uncover these things as you go along.

If you are good as a player and can separate the player vs character knowledge just enough, you have a better idea of what is going on. As you penetrate the temple and see inside, you already know there is a long hallway after the foyer. You let the GM describe what the entrance looks like and you get caught by the trap, just as you might have without the map. Having learned your lesson, you point out on the map that you are moving from point A to point B (that you point to on the map) and checking for traps the whole way. You say you aren’t going to look into the rooms yet, just check the corridor. The GM calls for the rolls and you move back to the doors, the GM calls for more rolls… etc. They stop you at one point to narrate what you see when you get to a certain point. You continue forward until cultists break out of one of the doors ahead…

The whole process of play is sped up because you aren’t working to understand how the area is laid out. The players don’t have to guess if a giant chasm exists beyond or not (unless the GM decides to leave it off the map for the surprise, a totally valid thing to do) and the GM doesn’t have to pause things to move into revealing or setting up more of the map before you move forward. Revealing, to the players, enough knowledge to help engage with the skeleton of the adventure helps bring people onto the same page and allows for things to not be missed if they aren’t adequately described. It lets players fill in the gaps with their own details, build a framework of how this area is set up to paint their own ideas on to, and even maybe helps them with anticipation of what might light beyond that one particular area that caught their eye. It’s a closed door that they get to think about in the down moments as they move through the adventure. 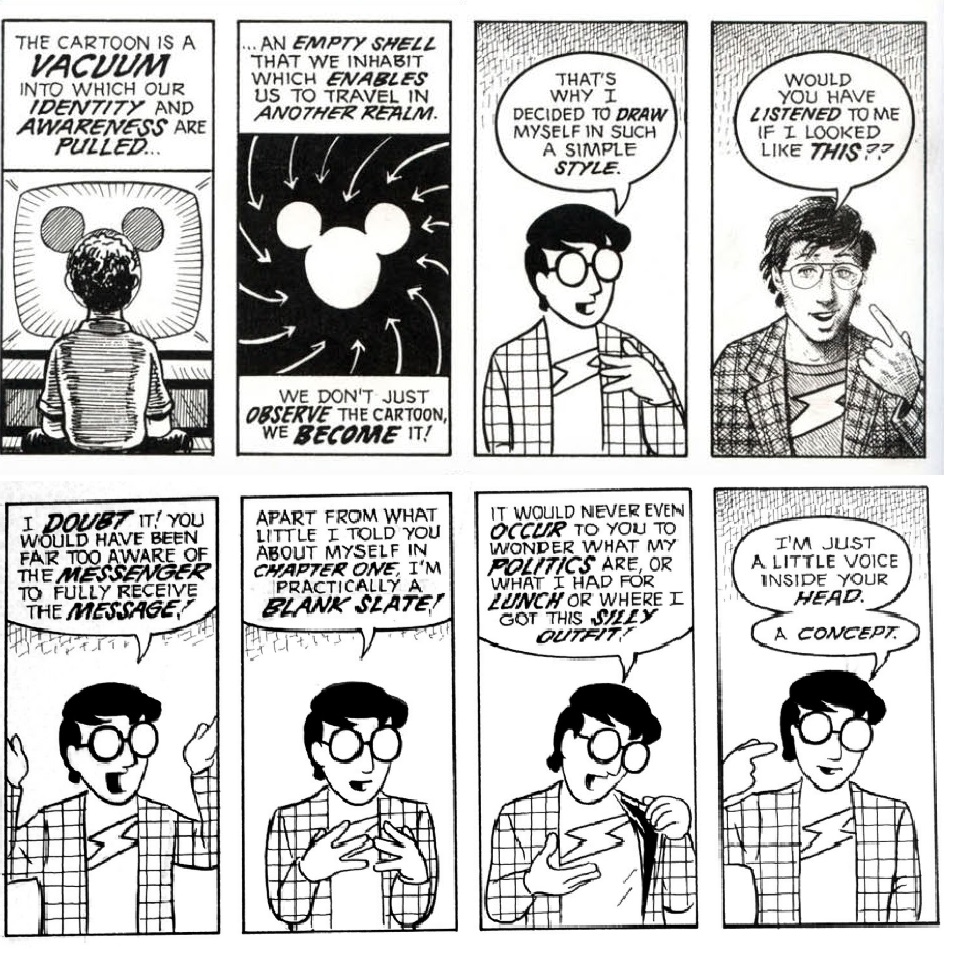 This concept calls back to the abstract vs detailed discussion from Scott Mccloud’s Understanding Comics.

The abstract nature even helps players fill in the details with their own concepts of a stone wall. It’s just enough to let them envision what that long corridor would look like, even if you haven’t taken the time to describe the slate grey sandy-to-the-touch stone. This helps with engagement, and in an online venue helps keep people thinking about the big picture. Maybe you’ve found or created a battlemap for every single room of the giant mansion… or maybe you’ve got a minimap in the top right corner with a small letter for each player and the players can reference that as you describe that area 5 is a kitchen suitable for 20 people to be comfortably inside, full of everything needed to host a giant feast. I know my players are always asking where we are on the giant maps I use online, and a minimap helps show where you are even if you aren’t actively pulling the tokens along in 30 foot increments.

Dealing with the meta curse?

A minimap wouldn’t be right for every style of game, and some tropes wouldn’t dovetail well with the immersion certain game styles preference, but then again it may help with more narrative-minded groups or even help more tactical groups feel confident in their ability to use their tactics rather than being completely surprised. So, meta is always going to be an interesting factor with minimaps and something that has to be dealt with based on play style and group. Maybe it’s just not right for your group, maybe it requires some narrative constraint to make it fit your game. Joval’s power to feel the bones of the earth lets them create a vague map, Emil is a cartographer and always collects maps of the areas they are likely to visit, a spell was found that pulls some information from the angelically controlled Akashic archives, or even sonar pings/hacking/mini drone mapping as part of every shadowrunner’s standard prep kit. When dealing with meta, there are three broad approaches I can envision.

Find your own fit within one of those three approaches and you can probably find a way to use it in your game.

I know this may not be a concept for every game, but it may be a missing brick in the foundation of a great experience. As I’ve been drifting more and more elements of the user experience from video games to tabletop rpgs, I’ve come to realize that there is a lot of room for overlap that can help the stories and adventures we have at the tables. The standard tropes for a lot of video games, especially jrpgs, came from early dungeons and dragons inspirations then got refined as the technology improved. Now, as our tabletop games move to more digital formats, there are many ui/ux elements we can port over with a little work and creative thinking. They help capture the old school feel with newer tools.

What do you think of providing that much detailed knowledge to players? Do you have other things you pull from video games to ttrpgs? Are there other ways to think of the meta concept of the map in game that I didn’t talk about?